From Infogalactic: the planetary knowledge core
Jump to: navigation, search
For the TV show, see Wagon Train.
"Baggage train" redirects here. For the military use of the term, see Train (military). 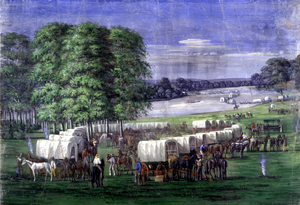 Pioneers Crossing the Plains of Nebraska 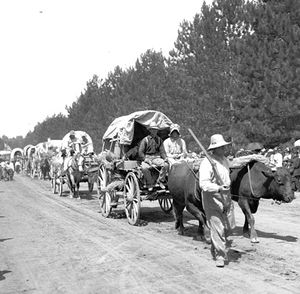 1912 Pioneer Day re-enactment of a wagon train in Utah.

A wagon train is a group of wagons traveling together. In a military context, a baggage train was the wagon train that followed an army with supplies and ammunition.

In the American West, settlers traveling across the plains and mountain passes in covered wagons banded together for mutual assistance. Although wagon trains are associated with the Old West, the Trekboers of South Africa also traveled in caravans of covered wagons.

Virtually all US trails originated in Independence, Missouri, a gateway to the American West.

Perhaps the most famous wagon train trail was the Oregon Trail which had a span of over 2,000 miles.[1] Other paths included the Santa Fe Trail, the Chisholm Trail, the California Trail (which split southwestward from the Oregon Trail), the Mormon Trail, and the Old Spanish Trail.

Although "wagon train" suggests a line of wagons, when terrain permitted, wagons would often fan out and travel abreast to minimize the amount of dust each wagon

Originally, westward movement began in small groups, but well-funded travellers with a hundred or more wagons could employ professional wagon masters (or trail masters) and ostlers.

Overland emigrants discovered smaller groups of twenty to forty wagons were more manageable than larger ones, especially without professional wagon masters. Many operated under democratic principles, creating bylaws and electing a captain. In reality, a captain had limited authority. His role was largely confined to getting everyone moving in the morning and selecting when and where to camp at night.[2]

Membership in wagon trains was generally fluid and wagons frequently joined or left trains depending on the needs and wishes of their owners. An accident or illness, for instance, might force someone to fall behind and wait for the next train, or an emigrant might "whip up" to overtake a forward train after a quarrel. Some might break away to settle in Colorado Territory or other territories along the way.

At night, wagon trains were often formed into a circle or square (a "laager" in South African terminology) for shelter from wind or weather, and to corral the emigrants' animals in the center to prevent them from running away or being stolen by Native Americans. While Indians might attempt to raid horses under cover of darkness, they rarely attacked a train. Contrary to popular belief, wagons were seldom circled defensively.[3]

Today, covered wagon trains are used to give an authentic experience for those desiring to explore the West as it was in the days of the pioneers and other groups traveling before modern vehicles were invented.

The advent of gunpowder warfare meant that an army could no longer rely solely on foraging in the surrounding countryside, and required a regular supply of munitions.[5] In the 18th century, organized commissary and quartermaster departments were developed to centralize delivery of supplies.[5] The delivery took the form of "baggage trains", large groups of wagons that traveled at the rear of the main army.