Recorded history in this state begins with the establishment of Fort Nez Perce in 1818 by the North West Company to trade with the Walla Walla people and other local Native American groups. At the time, the term "Nez Perce" was used more broadly than today, and included the Walla Walla in its scope in English usage.[8] Fort Nez Perce had its name shift to Fort Walla Walla. It was located significantly west of the present city.

On September 1, 1836, Marcus Whitman arrived with his wife Narcissa Whitman.[9] Here they established the Whitman Mission in an unsuccessful attempt to convert the local Walla Walla tribe to Christianity. Following a disease epidemic, both were killed by the Cayuse who believed that the missionaries were poisoning the native peoples. Whitman College was established in their honor.

The original North West Company and later Hudson's Bay Company Fort Nez Percés fur trading outpost, became a major stopping point for migrants moving west to Oregon Country. The fort has been restored with many of the original buildings preserved. The current Fort Walla Walla contains these buildings, albeit in a different location from the original, as well as a museum about the early settlers' lives.

The origins of Walla Walla at its present site begin with the establishment of Fort Walla Walla by the United States Army here in 1856.[10] The Walla Walla River, where it adjoins the Columbia River, was the starting point for the Mullan Road, constructed between 1859 and 1860 by US Army Lieut. John Mullan, connecting the head of navigation on the Columbia at Walla Walla (i.e., the west coast of the United States) with the head of navigation on the Missouri-Mississippi (that is, the east and gulf coasts of the U.S.) at Fort Benton, Montana.

Walla Walla was incorporated on January 11, 1862.[11] As a result of a gold rush in Idaho, during this decade the city became the largest community in the territory of Washington, at one point slated to be the new state's capital. Following this period of rapid growth, agriculture became the city's primary industry. 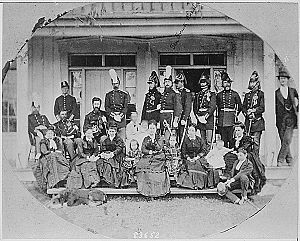 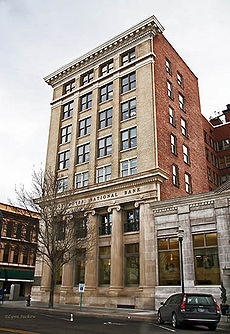 In 1846, the Catholic Church established the Diocese of Walla Walla, with Augustin-Magloire Blanchet as its bishop. (The Latin adjective, not the noun, used by the Roman Curia to refer to Walla Walla, is Valle-Valliensis.)[12] Blanchet arrived on September 5 of that year, but the Whitman massacre of November 29, 1847, led to an uneasy relationship between him, the native Cayuse people, and the United States government, as a result of which he left for St. Paul in the Willamette Valley.

In 1850, the see of Walla Walla was abandoned and its territory assigned to the new Diocese of Nesqually (later spelled "Nisqually"), with Blanchet as its bishop and its episcopal see in Vancouver.[13]

In 1971, it was nominally restored as Titular see of the lowest (Episcopal) rank, and since had six, mostly consecutive incumbents:

Proud residents of the town often brag about it as "the town so nice they named it twice".[14] Walla Walla is a Native American name that means "Place of Many Waters". The original name of the town was Steptoeville named after Colonel Edward Steptoe.[15]

Walla Walla is also located in the Walla Walla Valley with the rolling Palouse hills and the Blue Mountains to the east of town. Various creeks meander through town before combining to become the Walla Walla River, which drains into the Columbia River about 30 miles (48 km) west of town. The city lies in the rain shadow of the Cascade Mountains, so annual precipitation is fairly low.

There were 10,596 households of which 30.6% had children under the age of 18 living with them, 46.4% were married couples living together, 11.0% had a female householder with no husband present, and 38.4% were other forms of households. 31.9% of all households were made up of individuals and 15.1% had someone living alone who was 65 years of age or older. The average household size was 2.44 and the average family size was 3.08.

Though wheat is still a big crop, vineyards and wineries have become economically important over the last three decades.[22] In summer 2006, there were over 100 wineries in the greater Walla Walla area. Following the wine boom, the town has developed several top-tier restaurants and hotels. The Marcus Whitman Hotel, one of Washington's finest 1920s hotels, was renovated with original fixtures and furnitures. It is the tallest building in the city, at thirteen storeys.

Walla Walla currently has two farmers markets, both held from May until October. The first is located on the corner of 4th and Main, and is coordinated by the Downtown Walla Walla Foundation. The other is at the Walla Walla County Fairgrounds on S. Ninth Ave, run by the WW Valley Farmer's Market.[24]

Walla Walla has experienced an explosion in its wine industry over the last ten years. Several of the wineries have received top scores from wine publications such as Wine Spectator, The Wine Advocate and Wine and Spirits. L'Ecole 41, Woodward Canyon and Leonetti Cellar were the pioneers starting in the 1970s and 1980s. Although most of the early recognition went to the wines made from Merlot and Cabernet, Syrah is fast becoming a star varietal in this appellation.[25] Today there are over 100 wineries in the Walla Walla Valley and a host of shops catering to the wine industry.

Walla Walla Community College offers an associate degree (AAAS) in winemaking and grape growing through its 10-year-old Center for Enology and Viticulture, which operates its own commercial winery, College Cellars.[26]

One challenge to growing grapes in Walla Walla Valley is the risk of a killing freeze during the winter. They average one every six or seven years and the penultimate one, in 2004, destroyed about 75% of the wine grape crop in the valley. The valley was again hit with a killing frost in November 2010, leading to a 28% decline in Cabernet Sauvignon production, a 20% decline in red grape production, and an overall decline in production of 11% (red and white varietals).[27]

The wineries generate over $100 million (US) to the valley annually.

The second largest prison in Washington, after nearby Coyote Ridge Corrections Center in Connell, is the Washington State Penitentiary (WSP) located in Walla Walla, at 1313 North 13th. Originally opened in 1886, it now houses about 2000 offenders.[28] In addition, there are about 1000 staff members. In 2005, the financial benefit to the local economy was estimated to be about $55 million through salaries, medical services, utilities, and local purchases. Washington is a death penalty state, and occasional executions take place at the state penitentiary; the last execution took place on September 10, 2010.[29] Washington is also one of two states to still allow hanging as a choice when sentenced to death[30] (the other being New Hampshire); there has not been a hanging since May 1994 (the default method of execution was changed to lethal injection in 1996). The penitentiary is undergoing an extensive expansion project that will increase the prison capacity to 2,500 violent offenders and double the staff size.[31]

There are three major bus services in the area connecting the region's cities. Walla Walla and nearby College Place, WA are served by Valley Transit, a typical multi-route city bus service. The city of Milton-Freewater, OR has a single-line bus service with several stops in town with two stops in College Place and five in Walla Walla. Finally the Grape Line shuttle runs a 104-mile (167 km) loop between Walla Walla and Pasco three times a day. 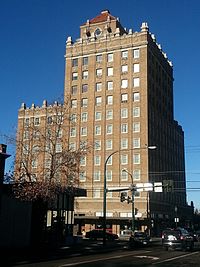 Whitman Hotel at Rose and Second in the "Great Neighborhood" 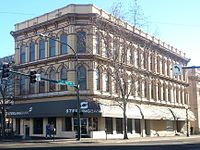 Sterling Bank in one of the renovated buildings in the "Great Neighborhood."

In 2012, the American Planning Association (APA) designated the downtown Walla Walla WA area a “Great Places in America: Neighborhood”. When evaluating the application from the City, the APA noted that what the community at large had achieved since 1980 was “nothing short of profound”. This national award recognized the successful ongoing planning efforts started by the Downtown Walla Walla Foundation (1984); formed by grassroots activists with support from residents, businesses, public officials and special interest groups to resuscitate downtown (APA).

This “great neighborhood” is bounded by Highway 12 to the north; Park Street to the east; Birch and Willow streets to the south; and 7th Avenue to the west. The charm of this neighborhood is the iconic architecture that ranges from Beaux- Arts to Art Moderne and nearly every style in-between since 1850. Among the neighborhood's iconic buildings are the Marcus Whitman Hotel (1906), the Interurban Depot Building (1909), the Baker Boyer Bank (1911), and the U.S. Post Office (1914) (APA).

A privately funded $35 million renovation of the Marcus Whitman Hotel in 2001 brought luxury rooms, a new conference center, and 30,000 square feet of office space to downtown Walla Walla. With more than $50 million in private and public funds, city officials embarked on rejuvenating 300 neighborhood buildings; implementing sustainable practices such as regularly planting of street trees for aesthetic value and cooling effect during summer; strengthening and expanding downtown neighborhood's pedestrian orientation and local public space network. Their success even shows in the Arbor Day Foundation designation of Walla Walla as a "Tree City" for the past 18 years. With this revitalized neighborhood, the City has experienced exponential growth of the region's newly established wine industry that now generates $100 million a year for the city and region (APA).

Walla Walla is home of the Walla Walla Sweets, a summer collegiate baseball team that plays in the West Coast League. The league comprises college players and prospects working towards a professional baseball career. Teams are located in British Columbia, Oregon and Washington. Sweets home games have been played at Borleske Stadium in Walla Walla, since their first season in 2010. In only their second season the Sweets played in the WCL Championship game, ultimately losing to the Corvallis Knights. In 2013, the Sweets won their first North Division title with the second best win-loss record in the WCL. Unfortunately, the Sweets lost their North Division playoff series to the Wenatchee Applesox that year.

Walla Walla is the location of Tour of Walla Walla. It is an annual four-stage road cycling race held in April. The races are held in Walla Walla and in the Palouse hills of nearby Waitsburg, WA. The stages include two road races, a time trial, and a criterium race.[32]

Finally, there is the annual Walla Walla Marathon which includes a full marathon, half-marathon, and 10k race. The full marathon is a Boston Marathon Qualifier.[33] It is held in October of each year and the race route winds through the streets of the city of Walla Walla and the country roads outside of town, often running past several of the region's many estate vineyards.

The Walla Walla Valley boasts a number of fine and performing arts organizations and venues. 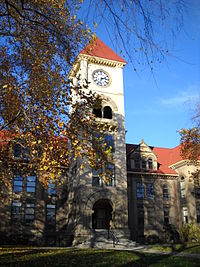 There are several private Christian schools in the area. These include:

In addition to these, there are three colleges in the area:

Baker Boyer Bank, the oldest bank in the state of Washington, was founded in Walla Walla in 1869.

Walla Walla is famous for its sweet onions. There are more than 100 wineries in or near Walla Walla.[44][45]

In 1972, Walla Walla established a sister city relationship with Sasayama, Japan. The two cities have since named roads after their counterpart sister city. Walla Walla also hosted exchange students from Sasayama since 1994 for a two-week home stay experience. One year high school student exchanges between the cities have occurred several times in the past. Cultural/art exchanges involving music, dance, and various art mediums have also occurred. Walla Walla Sister City Committee has been recipient of the Washington State Sister City Association Peace Prize in 2011 and 2014 for their involvement of promoting peace, cultural understanding and friendship.[46][47]