Walter Abel (June 6, 1898 – March 26, 1987) was an American stage and film character actor. Known as a prolific and very dependable character actor, Abel appeared in over 200 films, beginning in the silent film era. Often portraying characters of "responsibility," (the minister keeping morale up in a war zone in "So Proudly We Hail," the colonel leading a rescue effort in "Island in the Sky"), Abel was a regular in films of the 1940s and 1950s, in particular. A distinctive bearing and direct gaze were two of his trademarks. His eyes were brown and his (adult) height was five feet ten inches.

Abel was born in St. Paul, Minnesota, the son of Christine (née Becker) and Richard Michael Abel.[1] Abel graduated from the American Academy of Dramatic Arts where he had studied in 1917[2] and joined a touring company. His brother Alfred died in 1922 from tuberculosis contracted while serving overseas in World War I. Abel was married to concert harpist Marietta Bitter.[2]

He made his Broadway debut in Forbidden in 1919.[4] In 1924 he appeared in two Eugene O'Neill plays simultaneously: Bound East for Cardiff at the "The Provincetown Playhouse" and Desire Under the Elms at the "Greenwich Village Theater".[3] His many theatre credits include As You Like It (1923), William Congreve's Love for Love (1925), Anton Chekhov's The Seagull (1929-1930), Mourning Becomes Electra (1929), Kaufman and Hart's Merrily We Roll Along (1934), and Trelawny of the 'Wells' (1975). He also appeared in Channing Pollock's play The Enemy (1926) with Fay Bainter. The play was adapted to film as The Enemy (1927) with Lillian Gish and Ralph Forbes. He made his stage debut in London in the 1929 "Coquette".

His first major film role was as D'Artagnan in RKO Pictures's 1935 The Three Musketeers.[3] Abel went on to play in more than sixty films. Abel was a vice president of the Screen Actors' Guild.[5]

Abel also appeared as a concert narrator or reader with Eugene Ormandy the Philadelphia Orchestra in Aaron Copland's Portrait of Lincoln in 1951, and in Dylan Thomas' Under Milkwood in 1953. [5]

Abel died March 26, 1987, of a myocardial infarction in Essex, Connecticut. He was survived by two sons, John and Michael.[2] 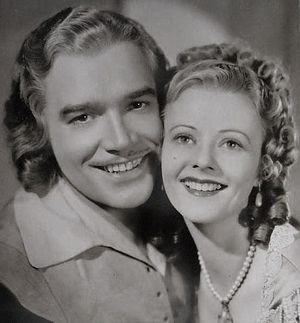