Walter Edward Block (born August 21, 1941) is an American Austrian School economist and anarcho-capitalist theorist.[1] He currently holds the Harold E. Wirth Eminent Scholar Endowed Chair in Economics at the J. A. Butt School of Business at Loyola University New Orleans. He is a senior fellow of the Ludwig von Mises Institute in Auburn, Alabama.[2] He is best known for his 1976 book Defending the Undefendable.

Block was born in Brooklyn, New York to Jewish parents Abraham Block, a certified public accountant, and Ruth Block, a paralegal, both of whom Block has said were liberals.[3] He attended James Madison High School, where Bernie Sanders was on his track team.[4] Block earned his Ph.D. degree in economics from Columbia University and wrote his dissertation on rent control in the United States under Gary Becker.[5] Block identifies himself as a "devout atheist."[6]

In an interview, Block stated, "In the fifties and sixties, I was just another commie living in Brooklyn."[7] Block credits his shift to libertarianism to his having attended a lecture with Ayn Rand while he was an undergraduate student.[3] Block later attended a luncheon with Rand, Nathaniel Branden, and Leonard Peikoff at which Branden suggested that Block read Atlas Shrugged by Ayn Rand and Economics in One Lesson by Henry Hazlitt.[3] He says that the final push to his conversion came from having met Murray Rothbard.[3] Though an anarchist and not, like the Objectivists, a minarchist, and though criticizing her as "cultish", Block still considers himself "a big fan" of Rand and considers Atlas Shrugged to be "the best novel ever written".[8] 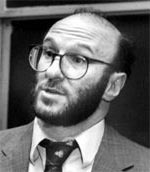 Walter Block received a B.A. in philosophy from Brooklyn College in 1964 and a Ph.D. in economics from Columbia University in 1972. He taught at the University of Central Arkansas, Holy Cross College, Baruch College and Rutgers University. He now holds the Harold E. Wirth Eminent Scholar Endowed Chair in Economics at the Butt College of Business, Loyola University, in New Orleans.[9]

From 1979 to 1991, Block was the senior economist with the Fraser Institute.[5] He is currently a senior fellow at Ludwig von Mises Institute, which has published various blog posts of his since 2000.[9][10]

In an essay on "inalienability" of natural and legal rights, Block defends what he calls a "voluntary slave contract", arguing that it is "a bona fide contract where consideration crosses hands; when it is abrogated, theft occurs". He notes only Robert Nozick agrees with him, and critiques the views of the libertarians who disagree. Block seeks to make "a tiny adjustment" which "strengthens libertarianism by making it more internally consistent." He argues that his position shows "that contract, predicated on private property [can] reach to the furthest realms of human interaction, even to voluntary slave contracts."[18]

Slavery and civil rights in the United States

A January 2014 article in the New York Times noted that Block opposed slavery because it was involuntary. The Times piece also quoted him as saying, apart from its involuntary nature, slavery was "not so bad — you pick cotton and sing songs." Block also told the Times that Woolworth's had the right to exclude blacks from its lunch counters, arguing that "no one is compelled to associate with people against their will."[19] Though he concedes the quotes attributed to him were accurate, Block responded to the article by accusing the Times of libel for allegedly quoting him out of context. He reiterated his opposition to slavery on the basis of its being involuntary, as well as his support for the right of Woolworth's to segregate on the basis of race. He called slavery monstrous, but only because it violated the libertarian non aggression principle, and for no other reason.[20] An Inside Higher Education piece noted that, in response to the story, seventeen faculty members at Block's university publicly called for him to be censured for his "recurring public attacks ... on the civil rights of all." The piece also reported that Reverend Kevin Wildes, the President of Block's university, took the "unusual step" of publicly critiquing his arguments as fallacious.[21]

Productivity of blacks and women

In a lecture Block called "Injustices in the Politics and Economics of Social Justice"[22] presented at the invitation of the Adam Smith Society of the Economics Department of Loyola College, Baltimore in November 2008, Block asserted that blacks and women were paid less than whites because they are "less productive".[15]

In the lecture, Block defended his views on women by alleging that, among younger and unmarried women, there is virtually no income disparity. When asked by an attendee to explain the difference in productivity between blacks and whites, he stated that as an economist he was not qualified to explain the disparity. Block did offer two thoughts that might account for the disparity: first, what he called the "politically correct" explanation, or socioeconomic disparities and historical injustices towards blacks; second, a "political incorrect" explanation, or "lower black IQs".[15]

James Gill wrote in the Times-Picayune that the lecture "ignited a furor", resulting in the president of the university, Reverend Brian F. Linnane, apologizing for what was taken as a "sexist and racist outburst", with Gill opining that, "ideas contrary to fashionable preconceptions are always likely to throw academia into a fit".[23]

According to Inside Higher Ed

Perhaps almost as notable as the president's direct response was the condemnation issued jointly by the college's economics department and the Adam Smith Society... "It is important to note that the remark was offensive not just because it was racially insensitive, but because it was erroneous and indicated poor-quality scholarship. There is ample scholarly evidence that, after adjusting for productivity-related characteristics (e.g., years of schooling, work experience, union and industry status, etc.) a considerable wage gap remains."[22]

In response to the criticisms, Block said he "regards sensitivity as the enemy of intellectual inquiry and truth."[15][23][24] In a December 2008 article, Block wrote that the lessons he had learned from the incident were regarding the need for tenure if one wants to speak out, the wisdom of Murray Rothbard’s words that "it is totally irresponsible to have a loud and vociferous opinion on economic subjects" while remaining ignorant of economics, and the importance of Ludwig von Mises’ motto: "Do not give in to evil, but proceed ever more boldly against it."[25]

Block believes that government management of roads and highways is not only inefficient but also deadly. He argues that "road socialism" causes the deaths of more than 35,000 people in the United States each year. And, although many people blame highway deaths on alcohol, unsafe vehicles, or speeding, Block lays the blame on the government officials who manage the highway system. "It may well be that speed and alcohol are deleterious to safe driving; but it is the road manager’s task to ascertain that the proper standards are maintained with regard to these aspects of safety. If unsafe conditions prevail in a private, multistory parking lot, or in a shopping mall, or in the aisles of a department store, the entrepreneur in question is held accountable."[26]

Block has written two papers about punishment of those engaging in "statist, governmental or other gangster activity". Block argues that there should be "a presumption that all government employees are guilty of a crime against humanity," though he notes that this presumption can be rebutted in many cases, such as that of U.S. Congressman and Mises Institute Senior Fellow Ron Paul. Block examines issues like restitution of land taken through eminent domain and possible retribution against politicians, IRS employees, and others who cooperated in governmental activity. He describes rules by which libertarian "Nuremberg Trials" might operate.[27][28]

Evictionism (in contrast to abortion)

According to Block's moral theory, the act of abortion must be conceptually separated into the acts of the eviction of the fetus from the womb, and the killing of the fetus. Building on the libertarian stand against trespass and murder, Block supports a right to the first act, but, except in certain circumstances, not the second act. Block believes the woman may legally abort if the fetus is not viable outside the womb, or the woman has announced to the world her abandonment of the right to custody of the fetus, and no one else has "homesteaded" that right by offering to care for the fetus.[29]

He also has written on finding a compromise between those who believe stem cell research is murder and those who favor it. He applies a libertarian theory of private property rights to his premise that even fertilized eggs have human rights and that the relevant issues are competition between researchers and those who wish to adopt the eggs.[30]

Block has theorized on whether a person defending oneself can harm a human shield or hostage used by an aggressor while in an act of self-defense. Block holds this is legitimate because the human shield is the first victim of the aggressor and, as such, he cannot be allowed to pass on his misery to the person defending oneself, the intended second victim of the aggressor. Block calls this "negative homesteading theory".[31][32]