From Infogalactic: the planetary knowledge core
(Redirected from Walter Reed Hospital)
Jump to: navigation, search
This article is about the U.S. Army medical center in use until August 27, 2011. For the research institute, see Walter Reed Army Institute of Research. For other uses, see Walter Reed (disambiguation).

The Walter Reed Army Medical Center (WRAMC) — known as Walter Reed General Hospital (WRGH) until 1951 — was the U.S. Army's flagship medical center from 1909 to 2011. Located on 113 acres (46 ha) in Washington, D.C., it served more than 150,000 active and retired personnel from all branches of the military. The center was named after Major Walter Reed (1851–1902), an army physician who led the team that confirmed that yellow fever is transmitted by mosquitoes rather than direct contact.

Since its origins, the WRAMC medical care facility grew from a bed capacity of 80 patients to approximately 5,500 rooms covering more than 28 acres (11 ha) of floor space. WRAMC combined with the National Naval Medical Center at Bethesda, Maryland in 2011 to form the tri-service Walter Reed National Military Medical Center (WRNMMC).

Fort Lesley J. McNair, located in southwest Washington, D.C. on land set aside by George Washington as a military reservation, is the third oldest U.S. Army installation in continuous use in the United States after West Point and Carlisle Barracks. Its position at the confluence of the Anacostia River and the Potomac River made it an excellent site for the defense of the nation's capital. Dating back to 1791, the post served as an arsenal, played an important role in the nation's defense, and housed the first U.S. Federal Penitentiary from 1839 to 1862.

Today, Fort McNair enjoys a strong tradition as the intellectual headquarters for defense. Furthermore, with unparalleled vistas of the picturesque waterfront and the opposing Virginia shoreline, the historic health clinic at Fort McNair, the precursor of today's Walter Reed Army Medical Center (WRAMC), overlooks the residences of top officials who choose the famed facility for the delivery of their health care needs.

"Walter Reed's Clinic," the location of the present day health clinic at Washington D.C., occupies what was from 1898 until 1909 the General Hospital at what was then Washington Barracks, long before the post was renamed in honor of Lt. Gen. McNair who was killed in 1944. The hospital served as the forerunner of Walter Reed General Hospital; however, the Victorian era waterfront dispensary remains and is perhaps one of America's most historically significant military medical treatment facilities. It is reported that Walter Reed lived and worked in the facility when he was assigned as Camp Surgeon from 1881 to 1882. After having served on other assignments, he returned as Professor of Medicine and Curator of the Army Medical Museum. Some of his epidemiological work included studies at Washington Barracks, and he is best known for discovering the transmission of yellow fever. In 1902, Major Reed underwent emergency surgery here for appendicitis and died of complications in this U.S. Army Medical Treatment Facility (MTF), within the very walls of what became his final military duty assignment.[1]

Regarding the structure itself, since the 1890s the health clinic was used as an Army General Hospital where physicians, corpsmen and nurses were trained in military health care. In 1899, the morgue was constructed which now houses the Dental Clinic, and in 1901 the hospital became an entirely separate command. This new organizational command relocated eight years later with the aide of horse-drawn wagons and an experimental steam driven ambulance in 1909. Departing from the 50-bed hospital, as documented in The Army Nursing Newsletter, Volume 99, Issue 2, February 2000,[2] they set out due north transporting with them 11 patients initially to the new 65-bed facility in the northern aspect of the capital. Having departed Ft. McNair, the organization has since developed into the Walter Reed Army Medical Center that we know today.

As for the facility they left behind at Fort McNair, it functioned in a smaller role as a post hospital until 1911 when the west wing was converted into a clinic.

Congressional legislation appropriated $192,000 for the construction of Walter Reed General Hospital[3] (WRGH, now known as "Building 1"), and the first ten patients were admitted on May 1, 1909. Lieutenant Colonel William Cline Borden was the initiator, planner and effective mover for the creation, location, and first Congressional support of the Medical Center. Due to his efforts, the facility was nicknamed "Borden's Dream."[2]

In 1923, General John J. Pershing signed the War Department order creating the "Army Medical Center" (AMC) within the same campus as the WRGH. (At this time, the Army Medical School was relocated from 604 Louisiana Avenue and became the "Medical Department Professional Service School" (MDPSS) in the new Building 40.) Pershing lived at Walter Reed from 1944 until his death there July 15, 1948.

The Walter Reed General Hospital (main building with cupola in distance at far left) in September, 1919. The WRGH was the precursor to WRAMC.

Starting in 1972, a huge new WRAMC building (Building 2) was constructed and made ready for occupation by 1977. WRAIR moved from Building 40 to a large new facility on the WRAMC Forest Glen Annex in Maryland in 1999. Subsequently, Building 40 was slated for renovation under an enhanced use lease by a private developer.

In 2007, the University of Pennsylvania and WRAMC established a partnership whereby proton therapy technology would be available to treat United States military personnel and veterans in the Perelman Center for Advanced Medicine's new Roberts Proton Therapy Center.[4][5]

In February 2007, The Washington Post published a series of investigative articles outlining cases of alleged neglect (physical deterioration of housing quarters outside hospital grounds, bureaucratic nightmares, etc.) at WRAMC as reported by outpatient soldiers and their family. A scandal and media furor quickly developed resulting in the firing of the WRAMC commanding general Maj. Gen. George W. Weightman,[6] the resignation of Secretary of the Army Francis J. Harvey (reportedly at the request of Secretary of Defense Robert Gates[7]), the forced resignation of Lt. Gen. Kevin C. Kiley, hospital commander from 2002 to 2004.[8] Congressional committee hearings were called and numerous politicians weighed in on the matter including President George W. Bush, who had appointed Harvey and Vice-President Dick Cheney. Several independent governmental investigations are ongoing and the controversy has spread to other military health facilities and the Department of Veterans Affairs health care system. 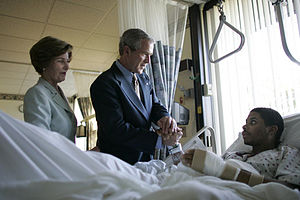 As part of a Base Realignment and Closure announcement on May 13, 2005, the Department of Defense proposed replacing Walter Reed Army Medical Center with a new Walter Reed National Military Medical Center (WRNMMC); the new center would be on the grounds of the National Naval Medical Center in Bethesda, Maryland, seven miles (11 km) from WRAMC's current location in Washington, D.C. The proposal is part of a program to transform medical facilities into joint facilities, with staff including Army, Navy, and Air Force medical personnel.

On August 25, 2005, the BRAC Committee recommended passage of the plans for the WRNMMC. The transfer of services from the existing to the new facilities was gradual to allow for continuity of care for the thousands of service members, retirees and family members that depended upon WRAMC. The end of operations at the WRAMC facility occurred on August 27, 2011.[9] The Army says the cost of closing that hospital and consolidating it with Bethesda Naval Medical Center in suburban Maryland more than doubled to $2.6 billion since the plan was announced in 2005 by the Base Realignment and Closing Commission (BRAC).[10]

The medical center's Georgia Avenue campus was listed on the National Register of Historic Places in 2015.

Notable people who died at WRGH or WRAMC

In addition to the WRAMC hospital complex, the WRAMC installation hosted a number of other related activities and organizations.

Use in popular culture