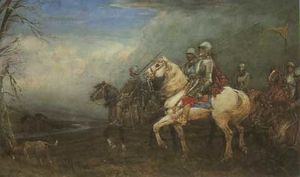 The son of William Scott of Harden, Wat was born before 1563 when he was recognised as his father's heir by precept of clare constat, by Alexander Home, 5th Lord Home, his father's feudal superior.

An infamous freebooter, he led raids across the Border and against his fellow countrymen. In 1592 he was one of those charged with taking part in the attempt to capture King James VI at Falkland Palace, led by the Earl of Bothwell, and was declared rebel and outlaw.

Scott also participated in the rescue of Kinmont Willie Armstrong, under his chief, Walter Scott of Buccleuch from Carlisle Castle in 1596.

In 1567, Wat Scott contracted to marry Mary Scott, daughter of John Scott of Dryhope, and known as the "Flower of Yarrow". When supplies were low she allegedly presented a set of spurs on a platter instead of meat, implying that the Scotts should ride out and replenish them from their neighbours' herds.[1]

He married again in 1598 to Margaret Edgar, widow of William Spottiswoode of that ilk, and daughter of John Edgar of Wedderlie.

Wat Scott had eight legitimate children by his two wives.

By his wife Mary Scott:

By his wife Margaret Edgar:

He is also said to have had three illegitimate daughters.[2]