From Infogalactic: the planetary knowledge core
Jump to: navigation, search
This article is about the entertainer. For the single by Sasha, see Wavy Gravy (song).

Wavy Gravy (born Hugh Nanton Romney, May 15, 1936) is an American entertainer and activist for peace, best known for his hippie appearance, personality and countercultural beliefs. His moniker was given to him by B.B. King at the Texas International Pop Festival in 1969.[1] "It's worked pretty well through my life," he says, "except with telephone operators – I have to say 'Gravy, first initial W.'"[2]

Romney's clown persona resulted from his political activism. Frequently arrested at demonstrations, he decided he would be less likely to be arrested if he dressed as a clown, so he became a founding member of the Phurst Church of Phun, a secret society of comics and clowns dedicated to ending the Vietnam War through the use of political theater. "Clowns are safe," he said.[3] Despite this, he also performs traditional clown activities such as jokes, magic tricks and entertaining children.

Wavy Gravy founded and co-founded several organizations, including Camp Winnarainbow, the Seva Foundation and the Hog Farm, an activist commune.[4] He was also the official clown of the Grateful Dead[5] and has two radio shows on Sirius Satellite Radio's Jam On station.[6]

Romney was born in East Greenbush, New York on May 15, 1936. As a child, he took walks around the blocks with Albert Einstein.[12] He attended William Hall High School in West Hartford, Connecticut. In 1954, Romney volunteered for the military and was honorably discharged after 22 months in the United States Army.[13]

Under the G.I. Bill, Romney entered Boston University Theater Department in 1957, then attended the Neighborhood Playhouse for the Theater in New York City. He worked at The Gaslight Cafe at night as poetry and entertainment director.[13]

His early career was managed by Lenny Bruce who brought Romney to California in 1962 where Romney did a live recording of Hugh Romney, Third Stream Humor as the opening act for Thelonious Monk at Club Renaissance in Los Angeles.[14]

The Hog Farm collective was established through a chain of events beginning with Ken Babbs hijacking the Merry Pranksters' bus, Further, to Mexico, which stranded the Merry Pranksters in Los Angeles. First Romney assembled a collective in North Hollywood, visited by the likes of musicians such as Tiny Tim whom he managed, and Ravi Shankar. After moving to Sunland, a northern suburb of Los Angeles, he was evicted from his one-bedroom cabin when the landlord found out that a large group of assorted Pranksters and musicians were staying there. Two hours later, a neighbor informed Romney that a nearby hog farm, owned by Claude Doty,[15] needed caretakers. Romney accepted the offer and worked the farm in exchange for rent. Local people, musicians, artists, and folks from other communes began staying at the mountain-top farm. In his book Something Good for a Change, Gravy described this early period as a "bizarre communal experiment" where the "people began to outnumber the pigs.[16]

Both Romney and Beecher had jobs in Los Angeles. He worked for Columbia Pictures teaching improvisation skills to actors. Bonnie was a successful television actress,[13] appearing in episodes of The Twilight Zone, Gunsmoke, and The Fugitive.

By 1966, the Hog Farm had coalesced into an entertainment organization providing light shows at the Shrine Exposition Hall in Los Angeles for music artists like the Grateful Dead, Cream, and Jimi Hendrix. Beginning in 1967, the collective began traveling across the country in converted school buses purchased with money earned as extras in Otto Preminger's feature film Skidoo (1968).[13]

The Hog Farm relocated to Black Oak Ranch in northern California in the early 1990s.[citation needed]

Gravy called his group the "Please Force," a reference to their non-intrusive tactics at keeping order, e.g., "Please don't do that, please do this instead". When asked by the press — who were the first to inform him that he and the rest of the Hog Farm were handling security — what kind of tools he intended to use to maintain order at the event, his response was "Cream pies and seltzer bottles"[17] (both being traditional clown props; he may have been referring to the silent film era Keystone Kops in particular). In Gravy's words: "They all wrote it down and I thought, 'the power of manipulating the media', ah ha!" Gravy has been the Master of Ceremonies, and the only person to appear on the bill of all three Woodstock Festivals.[citation needed]

On the morning of the 20th Anniversary of the Woodstock Festival, he was interviewed — along with Ken Kesey — live on Good Morning America at the Bethel concert site, where he discussed his experience as the MC of the event.[citation needed]

Gravy's first appearance at an event in the Neo-Pagan community was at the WinterStar Symposium in 1998 with Paul Krassner.[18] He appeared there again in 2000 with Phyllis Curott, where he joined Rev. Ivan Stang in a joint ritual of the Church of the SubGenius and his Church of the Cosmic Giggle.[citation needed]

At the Rock and Roll Hall of Fame and Museum's psychedelic tribute to the 1960s "I Want To Take You Higher",[19] Gravy's sleeping bag and tie-dyed false teeth were displayed. He and Paul Krassner appeared there on the last day of the exhibit on February 28, 1998.

Gravy is also the co-founder, with his wife, of the circus and performing arts camp Camp Winnarainbow, in Laytonville, California, near the Hog Farm.[21] Until 2003, Ben & Jerry's produced an ice cream named "Wavy Gravy" (caramel-cashew-Brazil nut base with a chocolate hazelnut fudge swirl and roasted almonds) which helped drive a scholarship fund for underprivileged kids to attend Camp Winnarainbow.[22]

Gravy has also been recognized for his work as a collage artist. He held a solo exhibition throughout April 1999, at the Firehouse Gallery under the direction of its owner Eric Gibbons.[23] He is known to create larger works in collage for celebrities in the Bay Area of California. He began exploring collage in the early '60s even before becoming Wavy Gravy, his first works created while living above the Gaslight in Greenwich Village after being inspired by a Max Ernst collage he saw at the Bitter End when opening for Peter, Paul and Mary.[24]

With hundreds of men being detained (women were held separately) in the “Hotel Diablo” – actually the old gymnasium at Cuesta College in San Luis Obispo, California – after arrests during the September 1981 Abalone Alliance organized, anti-nuclear protest, trespass/occupation and civil disobedience action at Diablo Canyon Power Plant, Gravy organized and acted as MC for a variety show that he called the “Tornado of Talent” which featured, among other performers (after the guards had allowed an acoustic guitar to be brought into the “jail”) Jackson Browne. Wavy arrived at the holding facility dressed in a pair of bright green coveralls. After settling into his "bunk" (a thin mattress on the gym floor) he removed the coveralls to reveal a Santa Claus suit.

Gravy established the store Nobody's Business across the road from the Hog Farm,[25] reminiscent of his "Nobody for President" campaign — as in: "Who's in Washington right now working to make the world a safer place? Nobody!"; "Nobody's Perfect"; "Nobody Keeps All Promises"; "Nobody Should Have That Much Power"; etc.[26] The joke had previously been used in the 1932 short film Betty Boop for President.

The "Nobody for President" campaign held a rally across from the White House on November 4, 1980 that included Yippies and a few anarchists to promote the option of "none of the above" choice on the ballot. After criticizing Jimmy Carter, Ronald Reagan and John B. Anderson, the committee offered the "perfect" candidate: Nobody. "Nobody makes apple pie better than Mom. And Nobody will love you when you're down and out." Gravy told a crowd of 50 onlookers at the rally.[27]

Early on, he shared an apartment with singer-songwriter Tom Paxton in Greenwich Village for a time, and Romney was one of Bob Dylan's earliest friends in New York City. One of Bob Dylan's girlfriends from the University of Minnesota, Bonnie Beecher, now Jahanara Romney, became Gravy's wife in 1965. They have a son, Jordan Romney (born in 1971 as Howdy Do-Good Gravy Tomahawk Truckstop Romney). 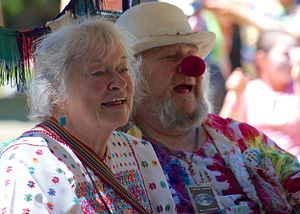 Romney states he has no familial relationship to former Michigan Governor George W. Romney, and thereby none to former Massachusetts Governor and presidential candidate Mitt Romney.

At the 1969 Texas International Pop Festival Romney was lying onstage, exhausted after spending hours trying to get festival-goers to put their clothes back on,[1] when it was announced that B.B. King was going to play. Romney began to get up; a hand appeared on his shoulder. It was B.B. King, who asked, "Are you wavy gravy?" to which Romney replied "Yes." "It's OK; I can work around you," [28] said B.B. King, and he and Johnny Winter proceeded to jam for hours after that. Romney said he considered this a mystical event, and assumed Wavy Gravy as his legal name.[4]