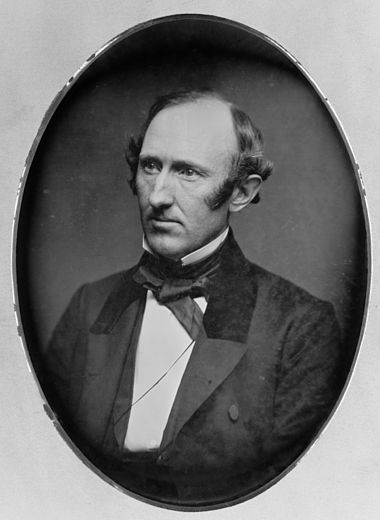 A daguerrotype by Mathew Brady of Wendell Phillips in his forties

Phillips was born in Boston, Massachusetts on November 29, 1811, to Sarah Walley and John Phillips, a successful lawyer, politician, and philanthropist. Phillips was schooled at Boston Latin School, and graduated from Harvard University in 1831. He went on to attend Harvard Law School, from which he graduated in 1833. In 1834, Phillips was admitted to the Massachusetts state bar, and in the same year, he opened a law practice in Boston. His professor of oratory was Edward T. Channing, a critic of flowery speakers such as Daniel Webster. Channing emphasized the value of plain speaking, a philosophy which Phillips took to heart.

On October 21, 1835, the Boston Female Anti-Slavery Society announced that George Thompson would be speaking. Pro-slavery forces posted nearly 500 notices of a $100 reward for the citizen that would first lay violent hands on him. Thompson canceled at the last minute, and William Lloyd Garrison, a newspaper writer who spoke openly against the wrongs of slavery, was quickly scheduled to speak in his place. A lynch mob formed, forcing Garrison to escape through the back of the hall and hide in a carpenter's shop. The mob soon found him, putting a noose around his neck to drag him away. Several strong men intervened and took him to the Leverett Street Jail. Phillips, watching from nearby Court Street, was a witness to the attempted lynching. After being converted to the abolitionist cause by Garrison in 1836, Phillips stopped practicing law in order to dedicate himself to the movement. He joined the American Anti-Slavery Society and frequently made speeches at its meetings. So highly regarded were his oratorical abilities that he was known as "abolition's Golden Trumpet". Like many of his fellow abolitionists who honored the free produce movement, Phillips took pains to avoid cane sugar and wear no clothing made of cotton, since both were produced by the labor of Southern slaves.

It was Phillips's contention that racial injustice was the source of all of society's ills. Like Garrison, Phillips denounced the Constitution for tolerating slavery. He disagreed with the argument of abolitionist Lysander Spooner that slavery was unconstitutional, and more generally disputed Spooner's notion that any unjust law should be held legally void by judges.[2]

In 1845, in an essay titled "No Union With Slaveholders", he argued for disunion:

The experience of the fifty years ... shows us the slaves trebling in numbers – slaveholders monopolizing the offices and dictating the policy of the Government – prostituting the strength and influence of the Nation to the support of slavery here and elsewhere – trampling on the rights of the free States, and making the courts of the country their tools. To continue this disastrous alliance longer is madness. The trial of fifty years only proves that it is impossible for free and slave States to unite on any terms, without all becoming partners in the guilt and responsible for the sin of slavery. Why prolong the experiment? Let every honest man join in the outcry of the American Anti-Slavery Society. (Quoted in Ruchames, The Abolitionists p. 196) 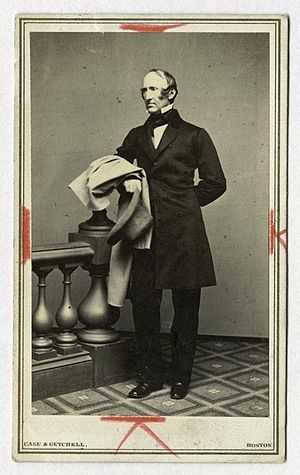 In 1836, Phillips was supporting the abolitionist cause when he met Ann Greene. It was her opinion that this cause required not just support but total commitment. Phillips and Greene were engaged that year and Greene declared Wendell to be her "best three quarters". They were to be married for 46 years.[3]

On December 7, 1837 in Boston's Faneuil Hall, Phillips' leadership and oratory established his preeminence within the abolitionist movement. Bostonians gathered at Faneuil Hall to discuss Elijah P. Lovejoy’s murder by a mob outside his abolitionist printing press in Alton, Illinois on November 7. Lovejoy died defending himself and his press from pro-slavery rioters who set fire to a warehouse storing his press and shot Lovejoy as he stepped outside to tip a ladder being used by the mob. His death engendered a national controversy between abolitionists and anti-abolitionists. At Faneuil Hall, Massachusetts attorney general James T. Austin defended the anti-abolitionist mob, comparing their actions to 1776 patriots who fought against the British. Deeply disgusted, Phillips spontaneously rebutted, praising Lovejoy’s actions as a defense of liberty. Inspired by Phillips’ eloquence and conviction, Garrison entered a partnership with him that came to define the beginning of the 1840s abolitionist movement. 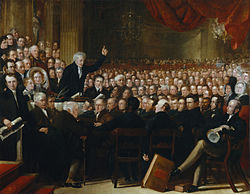 Anti-Slavery Society Convention 1840, painting by Benjamin Robert Haydon. Move your cursor to identify participants or click the icon to enlarge

The married couple went abroad in 1839 for two years. They spent the summer in Great Britain and the rest of each year in mainland Europe. They made important connections and Ann wrote of them meeting Elizabeth Pease and being particularly impressed by the Quaker abolitionist Richard D. Webb. In 1840 they went to London to join up with other American delegates to the World Anti-Slavery Convention at the Exeter Hall in London. Phillips' new wife was one of a number of female delegates, who included Lucretia Mott, Mary Grew, Sarah Pugh, Abby Kimber, Elizabeth Neall and Emily Winslow. The delegates were astounded to find that female delegates had not been expected and they were not allowed at the convention. Instructed by his wife not to "shilly-shally", Phillips went in to unsuccessfully appeal the case. The women were allowed in but had to sit separately and were not allowed to talk.[3]

In 1854 Phillips was indicted for his participation in the celebrated attempt to rescue Anthony Burns, a captured fugitive slave, from a jail in Boston.

On the eve of the Civil War, Phillips gave a speech at the New Bedford Lyceum in which he defended the Confederate States' right to secede: "A large body of people, sufficient to make a nation, have come to the conclusion that they will have a government of a certain form. Who denies them the right? Standing with the principles of '76 behind us, who can deny them the right? ... I maintain on the principles of '76 that Abraham Lincoln has no right to a soldier in Fort Sumter. ... You can never make such a war popular. ... The North never will endorse such a war."[4]

In 1860–61 many abolitionists welcomed the formation of the Confederacy because it would end the Slave Power's stranglehold over the United States government. This position was rejected by nationalists like Abraham Lincoln, who insisted on holding the Union together while gradually ending slavery. Twelve days after the attack on Ft. Sumter, Phillips announced his "hearty and hot" support for the war.[5] Disappointed with what he regarded as Lincoln's slow action, Phillips opposed his reelection in 1864, breaking with Garrison, who supported a candidate for the first time.

In the summer of 1862, Phillips' nephew, Samuel D. Phillips, died at Port Royal, South Carolina where he had gone to take part in the so-called Port Royal Experiment to assist the slave population there in the transition to freedom.

Phillips was also an early advocate of women’s rights. In the July 3, 1846, issue of the Liberator he called for securing women’s rights to their property and earnings as well as to the ballot. In 1840 he led the unsuccessful effort at the World Anti-Slavery Convention in London to have America’s women delegates seated. In 1849–50, he assisted Lucy Stone in conducting the first woman suffrage petition campaign in Massachusetts, drafting for her both the petition and an appeal for signatures. They repeated the effort the following two years, sending several hundred signatures to the state legislature. In 1852–53 they directed their petition to a convention charged with revising the state constitution, and sent it petitions bearing five thousand signatures. Together Phillips and Stone addressed the convention’s Committee on Qualifications of Voters on May 27, 1853. In 1854, Phillips helped Stone call a New England Woman’s Rights convention to expand suffrage petitioning into the other New England states.[6]

Phillips was a core member of the National Woman’s Rights Central Committee, which organized annual conventions throughout the 1850s, published its Proceedings, and executed plans adopted by the conventions. He was a close adviser of Lucy Stone, and a major presence at most of the conventions, for which he wrote resolutions defining the movement’s principles and goals.[7] His address to the 1851 convention, later called “Freedom for Woman,” was used as a women’s rights tract[8] into the twentieth century. As the movement’s treasurer, Phillips was trustee with Lucy Stone and Susan B. Anthony of a $5,000 fund given anonymously to the movement in 1858, called the “Phillips fund” until the death of the benefactor, Francis Jackson, in 1861, and thereafter the “Jackson Fund.”[9]

After African Americans gained the right to vote under the 15th Amendment in 1870, Phillips switched his attention to other issues, such as women's rights, universal suffrage, temperance and the labor movement.

Phillips's philosophical ideal was mainly self-control of the animal, physical self by the human, rational mind, although he admired rash activists like Elijah Lovejoy and John Brown.

Historian Gilbert Osofsky has argued that Phillips's nationalism was shaped by a religious ideology derived from the European Enlightenment as expressed by Thomas Paine, Thomas Jefferson, James Madison, and Alexander Hamilton. The Puritan ideal of a Godly Commonwealth through a pursuit of Christian morality and justice, however, was the main influence on Phillips' nationalism. He favored fragmenting the American republic in order to destroy slavery, and he sought to amalgamate all the American races. Thus, it was the moral end which mattered most in Phillips' nationalism.

Although publicly critical of President Ulysses S. Grant's drinking, he worked with Grant's second administration on the appointment of Indian agents. Phillips lobbied against military involvement in the settling of Native American problems on the Western frontier. He accused General Philip Sheridan of pursuing a policy of Indian extermination.

Public opinion turned against Native American advocates after the Battle of the Little Bighorn in July 1876, but Phillips continued to support the land claims of the Lakota (Sioux). During the 1870s Phillips arranged public forums for reformer Alfred B. Meacham and Indians affected by the country's "Indian removal" policy, including the Ponca chief, Standing Bear, and the Omaha writer and speaker, Susette LaFlesche Tibbles.

In 1904, the Chicago Public Schools opened Wendell Phillips High School in the Bronzeville neighborhood on the south side of Chicago in Phillips' honor. In July 1915, a monument was erected in Boston Public Garden to commemorate Phillips, inscribed with his words: "Whether in chains or in laurels, liberty knows nothing but victories". Jonathan Harr's "A Civil Action" refers to the statue in recounting Mark Phillips', a descendant of Wendell Phillips', reaction to a legal victory in the case against W.R. Grace & Co. et al. The Phillips Neighborhood of Minneapolis was named after Wendell Phillips.[10] Interestingly, it was in this neighborhood that the American Indian Movement was founded in 1968. The Wendell Phillips Award, established in 1896, is bestowed annually upon a member of Tufts University's senior class. The Wendell Phillips Prize at Harvard University is awarded to the best orator in the sophomore class. The main building of the College of the Pacific at the University of the Pacific is named the Wendell Phillips Center.