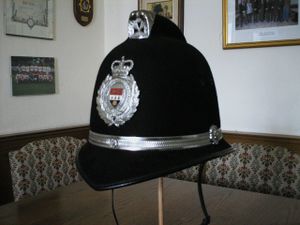 Helm of the West Mercia Police

West Mercia Police, formerly known as West Mercia Constabulary, is the territorial police force responsible for policing the counties of Herefordshire, Shropshire (including Telford and Wrekin) and Worcestershire in England. The force area covers 2,868 square miles (7,430 km2) making it the fourth largest police area in England and Wales. The resident population of the area is 1.19 million.[1]

The force is divided into five divisions and represent a very wide spread of policing environments from densely populated urban conurbations on the edge of Birmingham as well as Telford, Shrewsbury, and Worcester, to sparsely populated rural areas found in the rest of the force area.

The force has its headquarters in the historical manor house and grounds of Hindlip Hall on the outskirts of the city of Worcester. Its badge combines the heraldry of Worcestershire, Herefordshire and Shropshire.

West Mercia is a partner, alongside two other forces, in the Central Motorway Police Group. In 2013 an alliance was formed with Warwickshire Police.

The force is organised into five territorial policing units (TPUs)[1] which are alphabetically coded geographically from south to north (C D E F & G). Operating across three counties, West Mercia Police maintains many stations, with each TPU having an HQ Police station. The TPUs are further divided into Safer Neighbourhood Teams (SNTs); there are 82 SNTs across the force.

Listed below are the TPUs and police stations maintained by the force:

A volunteer cadet scheme had existed in the Telford division since the early 1990s and in September 2013, the scheme was expanded force-wide, creating a new detachment of police cadets in each Territorial Policing Unit area. Each detachment is headquartered in the respective TPU HQ, except the South Worcestershire detachment, who are based at Tudor Grange Academy.

In 2010, the Telford Cadets Detachment was awarded The Queen's Award for Voluntary Service.[6]

According to West Mercia Police's Website, "The scheme is aimed at young people who wish to engage in a program that offers them an opportunity to gain a practical understanding of policing, develop their spirit of adventure and good citizenship, while supporting their local policing priorities through volunteering, working with partner agencies and positive participation in their communities."

A new intake of approximately 15 new cadets per detachment occurs annually. New recruits must be aged 16 or over and have finished secondary education. Young people can remain as cadets for up to two years. Cadets can then consider joining the force at age 18, becoming a cadet leader in their detachment, or leaving the scheme altogether.[7]

Each detachment is led by several Cadet Leaders who are Police Officers, PCSOs and Police Volunteers from the force.

In November 2005, the government announced major reforms of policing in England and Wales, which raised the prospect of West Mercia Constabulary being merged with other forces in the West Midlands region.

Under final proposals made by the Home Secretary on 6 February 2006, it would merge with Staffordshire Police, Warwickshire Constabulary and West Midlands Police to form a single strategic force for the West Midlands region. This came under particular criticism from West Mercia Constabulary, especially as it was rated the best force in the country. Instead, the constabulary wishes to remain a separate force. The proposals are also unpopular with many of the local authorities in the West Mercia area.

When John Reid became Home Secretary in 2006, he put plans to merge the force – on hold, and now it seems likely that the plans might be scrapped altogether. As of 12 July 2006 the merger plans have been on hold.

The coalition government has not made any indication of re-introducing any such plans.

In 2013 the West Mercia and Warwickshire police forces formed an alliance, sharing certain administrative functions in order to save both forces money.