William Bradford (May 20, 1663 – May 23, 1752) was an early English printer in North America. He is best known as "the pioneer printer of the Middle colonies" and the head of a family that included publishers for 140 years. He was also known for controversies regarding freedom of the press.

William Bradford was born to William (d. 1667) and Ann Bradford in the village of Barwell in Leicestershire, England where his father was a printer. His family were likely members of the Society of Friends. As was customary, he was apprenticed outside the family to Andrew Sowle, the foremost Quaker printer in London. By 1684, he had mastered the trade and married the master's daughter, Elizabeth. Sowle arranged for Bradford to join William Penn in his new colony in North America.[1]

In 1685, the Bradfords emigrated to Philadelphia, and Elizabeth gave birth to their first child, Andrew in 1686. Bradford set up Pennsylvania's first printing press and, in 1690, helped construct William Rittenhouse's paper mill, the first in the English colonies.[1]

In his early days as a printer, Bradford published an almanac, "Kalendarium Pennsilvaniense" by Samuel Atkins. In the almanac, Bradford apologized for errors caused by his troublesome travel but hoped that readers would appreciate the hard work he underwent in order to bring print to the Middle Colonies. The publication received immediate attention, especially from Pennsylvania Governor William Penn who took offense at a reference to him. Atkins was quickly reprimanded for the incident and Bradford was told not to print anything unless it was approved by the Pennsylvania Council. Later in 1687, Bradford was informed not to print anything about Quakers unless they approved it beforehand. In 1689, the new Pennsylvania governor John Blackwell was outraged and officially reprimanded Bradford when he printed William Penn's original charter for the colony. Bradford argued that he printed what he received and was not liable. Bradford then quit his business and briefly went to England, to return in 1690.[2]

In 1692, Bradford was arrested, tried, and jailed for printing without an imprint. His press and type were seized but later returned to him in 1693. [1] 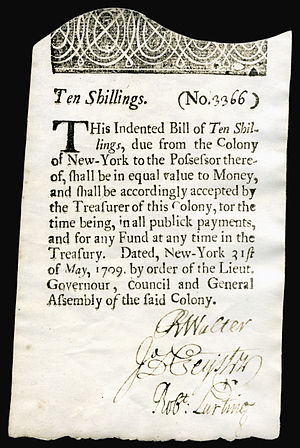 Bradford was responsible for printing the very first issue (31 May 1709) of paper currency for the Colony of New York.

In 1693, Bradford applied for and was appointed to the position of public printer for New York. He lived on Pearl Street in Manhattan, then moved to Stone Street in 1698. His offices were located in Hanover Square. In 1702, he was appointed public printer of New Jersey (a post held concurrently with his New York position), and became clerk of the New Jersey assembly in 1710[1]

In 1723 when Benjamin Franklin was in New York immediately after leaving Boston he approached Bradford for employment, and Bradford referred him to his son in Philadelphia. [4]

Between 1725-1744, Bradford printed the New-York Gazette, New York's first newspaper.[1] In 1731, he married a woman named Smith. In 1734, his former apprentice, John Peter Zenger, was brought to court for libel, but Bradford remained neutral during the case.[1]

Bradford retired at the age of 81 in 1744. He died on May 23, 1752 and was interred in the Trinity Churchyard Cemetery on Wall Street in Manhattan.

Bradford's son, Andrew, and Andrew's wife Cornelia Smith Bradford were colonial printers. Bradford's grandson, William would become a famous printer during the American Revolution. The Bradford Family Papers (1620-1906) are held at the Historical Society of Pennsylvania.[5]

Earl Shilton Community College (a college with a sixth form) in Leicestershire was renamed in honor of its neighboring village's famous son and is now William Bradford Academy.