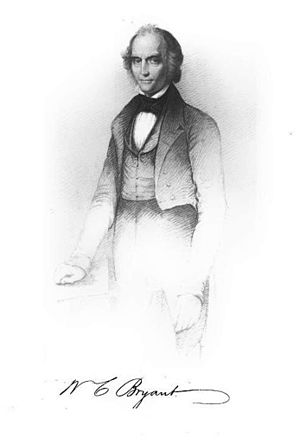 He was also a nephew of Charity Bryant, a Vermont seamstress who is the subject of Rachel Hope Cleves' 2014 book Charity and Sylvia: A Same-Sex Marriage in Early America.[3]

Bryant and his family moved to a new home when he was two years old. The William Cullen Bryant Homestead, his boyhood home, is now a museum. After just one year at Williams College (he entered with sophomore standing), he hoped to transfer to Yale, but a talk with his father led to the realization that family finances would not support it. His father counseled a legal career as his best available choice, and the disappointed poet began to study law in Worthington and Bridgewater in Massachusetts. He was admitted to the bar in 1815 and began practicing law in nearby Plainfield, walking the seven miles from Cummington every day. On one of these walks, in December 1815, he noticed a single bird flying on the horizon; the sight moved him enough to write "To a Waterfowl".[4]

Bryant developed an interest in poetry early in life. Under his father's tutelage, he emulated Alexander Pope and other Neo-Classic British poets. "The Embargo", a savage attack on President Thomas Jefferson published in 1808, reflected Dr. Bryant's Federalist political views. The first edition quickly sold out — partly because of publicity attached to the poet's young age. A second, expanded edition included Bryant's translation of classical verse. During his collegiate studies and his reading for the law, he wrote little poetry, but encounters with the Graveyard Poets and then Wordsworth regenerated his passion for "the witchery of song."

"Thanatopsis" is Bryant's most famous poem, which Bryant may have been working on as early as 1811. In 1817 his father took some pages of verse from his son's desk, and at the invitation of Willard Phillips, an editor of the North American Review who had previously been tutored in the classics by Dr. Bryant, he submitted them along with his own work. The editor of the Review, Edward Tyrrel Channing, read the poem to his assistant, Richard Henry Dana, who immediately exclaimed, "That was never written on this side of the water!"[5] Someone at the North American joined two of the son's discrete fragments, gave the result the Greek-derived title Thanatopsis ("meditation on death"), mistakenly attributed it to the father, and published it. After clarification of the authorship, the son's poems began appearing with some regularity in the "[Review]". "To a Waterfowl", published in 1821 was the most popular. 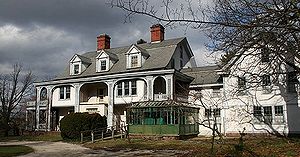 On January 11, 1821,[6] Bryant, still striving to build a legal career, married Frances Fairchild. Soon after, having received an invitation to address the Harvard University Phi Beta Kappa Society at the school's August commencement, Bryant spent months working on "The Ages", a panorama in verse of the history of civilization, culminating in the establishment of the United States. As it would in all collections he subsequently issued, "The Ages" led the volume, also entitled Poems, which he arranged to publish on the same trip to Cambridge. For that book, he added sets of lines at the beginning and end of "Thanatopsis" that changed the poem. His career as a poet was now established, though recognition as America's leading poet waited until 1832, when an expanded Poems was published in the U.S. and, with the assistance of Washington Irving, in Britain.

His poetry has been described as being "of a thoughtful, meditative character, and makes but slight appeal to the mass of readers."[7]

From 1816 to 1825, Bryant depended on his law practice in Great Barrington, Massachusetts to sustain his family financially, but the strain of dealing with unsophisticated neighbors and juridical pettifoggery pushed him to trade his unrewarding profession for New York City and the promise of a literary career. With the encouragement of a distinguished and well-connected literary family, the Sedgwicks, he quickly gained a foothold in New York City's vibrant cultural life. His first employment, in 1825, was as editor of the New-York Review, which within the next year merged with the United States Review and Literary Gazette. But in the throes of the failing struggle to raise subscriptions, he accepted part-time duties with the New-York Evening Post under William Coleman; then, partly because of Coleman's ill health, traceable to the consequences of a duel and then a stroke, Bryant's responsibilities expanded rapidly. From Assistant Editor he rose to Editor-in-Chief and co-owner of the newspaper that had been founded by Alexander Hamilton. Over the next half century, the "Post" would become the most respected paper in the city and, from the election of Andrew Jackson, the major platform in the Northeast for the Democratic Party and subsequently of the Free Soil and Republican Parties. In the process, the Evening-Post also became the pillar of a substantial fortune. From his Federalist beginnings, Bryant had shifted to being one of the most liberal voices of the century. An early supporter of organized labor, with his 1836 editorials the right of workmen to strike, Bryant also defended of religious minorities and immigrants, and promoted the abolition of slavery.[8] He "threw himself into the foreground of the battle for human rights"[9] and did not cease speaking out against the corrupting influence of certain bankers in spite of their efforts to break down the paper.[10] According to newspaper historian Frank Luther Mott, Bryant was "a great liberal seldom done justice by modern writers".[11] 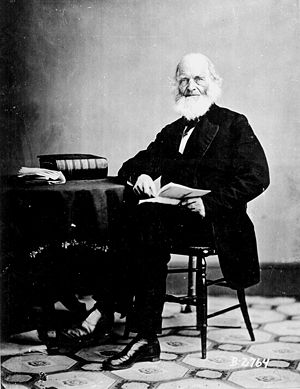 Ironically, the boy who first tasted fame for his diatribe against Thomas Jefferson and his party became one of the key supporters in the Northeast of that same party under Jackson. Bryant's views, always progressive though not quite populist, in course led him to join the Free Soilers, and when the Free Soil Party became a core of the new Republican Party in 1856, Bryant vigorously campaigned for John Frémont. That exertion enhanced his standing in party councils, and in 1860, he was one of the prime Eastern exponents of Abraham Lincoln, whom he introduced at Cooper Union. (That "Cooper Union speech" lifted Lincoln to the nomination, and then the presidency.)

Although literary historians have neglected his fiction, Bryant's stories over the seven-year period from his time with the Review to the publication of Tales of Glauber Spa in 1832 show a variety of strategies, making him the most inventive of practitioners of the genre during this early stage of its evolution.[12]

Bryant edited the very successful Picturesque America which was published between 1872 and 1874. This two-volume set was lavishly illustrated and described scenic places in the United States and Canada.[13]

In his last decade, Bryant shifted from writing his own poetry to a blank verse translation of Homer's works. He assiduously worked on the Iliad and The Odyssey from 1871 to 1874. He is also remembered as one of the principal authorities on homeopathy and as a hymnist for the Unitarian Church — both legacies of his father's enormous influence on him.

Bryant died in 1878 of complications from an accidental fall suffered after participating in a Central Park ceremony honoring Italian patriot Giuseppe Mazzini. He is buried at Roslyn Cemetery in Roslyn, Long Island, New York.[14] 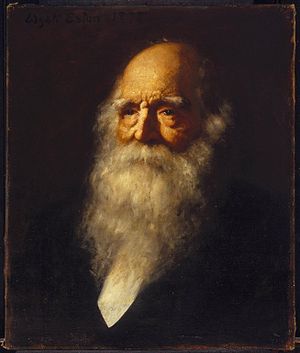 Poet and literary critic Thomas Holley Chivers said that the "only thing [Bryant] ever wrote that may be called Poetry is 'Thanatopsis', which he stole line for line from the Spanish. The fact is, that he never did anything but steal — as nothing he ever wrote is original."[15] Contemporary critic Edgar Allan Poe, on the other hand, praised Bryant and specifically the poem "June" in his essay "The Poetic Principle":

The rhythmical flow, here, is even voluptuous — nothing could be more melodious. The poem has always affected me in a remarkable manner. The intense melancholy which seems to well up, perforce, to the surface of all the poet's cheerful sayings about his grave, we find thrilling us to the soul — while there is the truest poetic elevation in the thrill. The impression left is one of a pleasurable sadness.[16]

Editor and children's writer Mary Mapes Dodge wrote that Bryant's poems "have wrought vast and far-reaching good in the world." She predicted, "You will admire more and more, as you grow older, the noble poems of this great and good man."[17]

Bryant's poetry is tender and graceful, pervaded by a contemplative melancholy, and a love of solitude and the silence of the woods. Though he was brought up to admire Pope, and in his early youth imitated him, he was one of the first American poets to throw off his influence. He had a high sense of duty, was a prominent and patriotic citizen, and enjoyed the esteem and even the reverence of his fellow-countrymen. 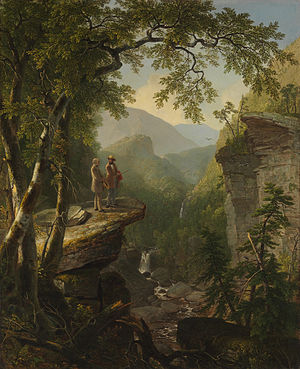 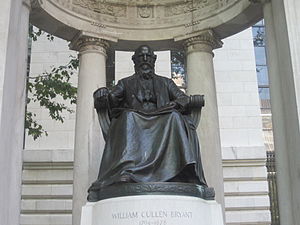 In 1884, New York City's Reservoir Square, at the intersection of 42nd Street and Sixth Avenue, was renamed Bryant Park in his honor. The city later named a public high school in Long Island City, Queens in his honor.

A park in East York, a suburb of Toronto, Canada, bears the name of Cullen Bryant Park as well.

Although he is now thought of as a New Englander[citation needed], Bryant, for most of his lifetime, was thoroughly a New Yorker — and a very dedicated one at that. He was a major force behind the idea that became Central Park, as well as a leading proponent of creating the Metropolitan Museum of Art. He was one of a group of founders of New York Medical College.[18] He had close affinities with the Hudson River School of art and was an intimate friend of Thomas Cole. He defended immigrants and, at some financial risk to himself, championed the rights of workers to form labor unions.

Some[19] however, argue that a reassessment is long overdue. It finds great merit in a couple of short stories Bryant wrote while trying to build interest in periodicals he edited. More importantly, it perceives a poet of great technical sophistication who was a progenitor of Walt Whitman, to whom he was a mentor.[19]

Martin Luther King, Jr quoted Bryant in his speech "Give Us the Ballot", when he said, "there is something in this universe which justifies William Cullen Bryant in saying: 'Truth crushed to earth will rise again.'" [20]

The Seattle neighborhood Bryant is named after him.