He was a long-time syndicated political columnist for the New York Times and the author of "On Language" in the New York Times Magazine, a column on popular etymology, new or unusual usages, and other language-related topics from its inception.

Safire was born William Lewis Safir in New York City, New York, the son of Ida (née Panish) and Oliver Craus Safir.[3][4] His family was Jewish, and originated in Romania on his father's side.[5] Safire later added the "e" to his surname for pronunciation reasons, though some of his relatives continue to use the original spelling.

Safire graduated from the Bronx High School of Science, a specialized public high school in New York City. He attended Syracuse University but dropped out after two years. He delivered the commencement address at Syracuse in 1978 and 1990, and became a trustee of the university. 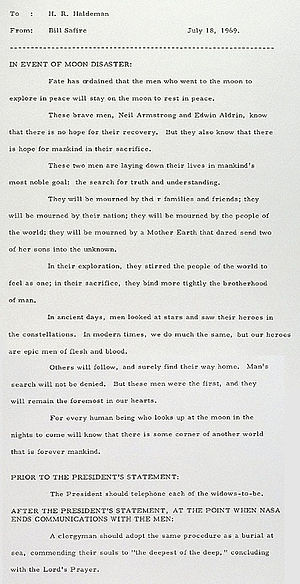 William Safire memo to H. R. Haldeman to be used in the event that Apollo 11 ended in disaster.

He was a public relations executive from 1955 to 1960. Previously, he had been a radio and television producer and an Army correspondent. He worked as a publicist for a homebuilder who exhibited a model home at an American trade fair at Sokolniki Park in Moscow in 1959—the one in which Richard Nixon and Nikita Khrushchev had their famous Kitchen Debate. A widely circulated black-and-white photograph of the event was taken by Safire.[6] Safire joined Nixon's campaign for the 1960 Presidential race, and again in 1968. After Nixon's 1968 victory, Safire served as a speechwriter for him and for Spiro Agnew; he is well known for having created Agnew's famous term, "nattering nabobs of negativism."

Safire prepared a speech called In Event of Moon Disaster for President Nixon to read on television if the Apollo 11 astronauts were stranded on the Moon.[7] According to the plans, Mission Control would "close down communications" with the LEM and a clergyman would have commended their souls to "the deepest of the deep" in a public ritual likened to burial at sea. Presidential telephone calls to the astronauts' wives were also planned. The speech originated in a memo from Safire to Nixon's chief of staff H. R. Haldeman in which Safire suggested a protocol the administration might follow in reaction to such a disaster.[8][9] The last line of the prepared text contained an allusion to Rupert Brooke's First World War poem "The Soldier".[9] In a 2013 piece for Foreign Policy magazine, Joshua Keating included the speech as one of six entries in a list of "The Greatest Doomsday Speeches Never Made."[10]

He joined the New York Times as a political columnist in 1973. Soon after joining the Times, Safire learned that he had been the target of "national security" wiretaps authorized by Nixon, and, after noting that he had worked only on domestic matters, wrote with what he characterized as "restrained fury" that he had not worked for Nixon through a difficult decade "to have him—or some lizard-lidded paranoid acting without his approval—eavesdropping on my conversations."[11]

In 1978, Safire won the Pulitzer Prize for Commentary on Bert Lance's alleged budgetary irregularities; in 1981, Lance was acquitted by a jury on all nine charges. Safire's column on October 27, 1980, entitled "The Ayatollah Votes", was quoted in a campaign ad for Ronald Reagan in that year's presidential election.[12]

Safire also frequently appeared on the NBC's Meet the Press.

Upon announcing the retirement of Safire's political column in 2005, Arthur Sulzberger Jr., publisher of The New York Times, said:

The New York Times without Bill Safire is all but unimaginable, Bill's provocative and insightful commentary has held our readers captive since he first graced our Op-Ed Page in 1973. Reaching for his column became a critical and enjoyable part of the day for our readers across the country and around the world. Whether you agreed with him or not was never the point, his writing is delightful, informed and engaging.

Safire served as a member of the Pulitzer Prize Board from 1995 to 2004. After ending his op-ed column, he became the full-time chief executive of the Dana Foundation, where he was chairman from 2000. In 2006, Safire was awarded the Presidential Medal of Freedom by President George W. Bush.

Portions of Safire's FBI file were released in 2010. The documents "detail wiretapping ordered by the Nixon administration, including the tapping of Safire's phone."[13]

In addition to his political columns, Safire wrote a column, "On Language", in the weekly New York Times Magazine from 1979 until the month of his death. Many of the columns were collected in books.[2] According to the linguist Geoffrey Pullum, over the years he became less of a "grammar-nitpicker," and Benjamin Zimmer cited his willingness to learn from descriptive linguists.[14] Another book on language was The New Language of Politics (1968),[2] which developed into what Zimmer called Safire's "magnum opus," Safire's Political Dictionary.[15]

Safire described himself as a "libertarian conservative." A Washington Post story on the ending of his op-ed column quotes him on the subject:

I'm willing to zap conservatives when they do things that are not libertarian. [After the 9/11 attacks,] I was the first to really go after George W. on his treatment of prisoners.

After voting for Bill Clinton in 1992, Safire became one of the leading critics of Clinton's administration. Hillary Clinton in particular was often the target of his ire. He caused controversy in a January 8, 1996, essay when, after reviewing her record, he concluded she was a "congenital liar". She did not respond to the specific instances cited, but said that she didn't feel offended for herself, but for her mother's sake. According to the president's press secretary at the time, Mike McCurry, "the President, if he were not the President, would have delivered a more forceful response to that on the bridge of Mr. Safire's nose".[16] This was not confirmed by Bill Clinton, who later replaced Mr. McCurry with Joe Lockhart.

Safire was one of several voices who called for war with Iraq, and predicted a "quick war" and wrote: "Iraqis, cheering their liberators, will lead the Arab world toward democracy."[17] He consistently brought up the point in his Times columns that an Iraqi intelligence agent met with Mohamed Atta, one of the 9/11 attackers, in Prague,[18] which he called an "undisputed fact", a theory which was disputed by the CIA and other intelligence agencies.[19] Safire insisted that the theory was true and used it to make a case for war against Iraq. He also incorrectly predicted that "freed scientists" would lead coalition forces to "caches [of weapons of mass destruction] no inspectors could find".[20]

Safire was staunchly pro-Israel. He received the Guardian of Zion Award of Bar-Ilan University in 2005. President George W. Bush appointed him to serve on the Honorary Delegation to accompany him to Jerusalem for the celebration of the 60th anniversary of the State of Israel in May 2008.[21]

Safire died from pancreatic cancer at a hospice in Rockville, Maryland, on September 27, 2009, aged 79. He was survived by his wife, Helene Belmar (Julius); their children, Mark and Annabel; and granddaughter, Lily.[2][22]

The following is a partial list of his writings: