Born in Marion, Indiana, he received a LL.B. from the Cincinnati Law School in 1881. He was a member of the Beta Theta Pi fraternity and the Knights of Pythias. After three years private practice in Marion, he moved to the Wyoming Territory where he served as city attorney of Cheyenne, Wyoming and a member of the territorial legislature. At the age of 30, he was appointed chief judge of the territorial court.[1] Upon statehood, he served as Chief Justice of the Wyoming Supreme Court for four days,.[2] and again took up private practice for seven years, including much work for the Union Pacific and other railroads.

In 1896 he represented the state of Wyoming before the U.S. Supreme Court in Ward v. Race Horse 163 U.S. 504 (1896). At issue was a state poaching charge for hunting out of season, and its purported conflict with an Indian treaty that allowed the activity. The Native Americans won in the U.S. Federal District Court; the judgment was revised on appeal to the Supreme Court by a 7-1 majority.[2][3][4]

In the summer and fall of 1896, Van Devanter was afflicted with typhoid fever.[2] From 1896 to 1900 he served in Washington, D.C. as an assistant attorney general, working in the Department of Interior. He was also a professor at The George Washington University Law School from 1897 to 1903.

On February 4, 1903, President Theodore Roosevelt nominated Van Devanter to a seat on the Eighth Circuit Court of Appeals created by 32 Stat. 791. He was confirmed by the United States Senate on February 18, 1903, and received his commission the same day.

In 1910, William Howard Taft elevated him to the Supreme Court. Taft nominated Van Devanter on December 12, 1910 to the Associate Justice seat vacated by Edward D. White. Three days later, Van Devanter was confirmed by the United States Senate on December 15, 1910,[1] and received his commission the following day. Van Devanter assumed senior status on June 2, 1937, one of the first Supreme Court Justices to do so. Although no longer on the Court at that point, he technically remained available to hear cases until his death.

On the court, he made his mark in opinions on public lands, Indian questions, water rights, admiralty, jurisdiction, and corporate law, but is best remembered for his opinions defending limited government in the 1920s and 1930s. He served for over twenty-five years,[5] and voted against the Agricultural Adjustment Administration (United States v. Butler), the National Recovery Administration (Schechter Poultry Corp. v. United States), federal regulation of labor relations (National Labor Relations Board v. Jones and Laughlin Steel Corp.), the Railway Pension Act (Railroad Retirement Board v. Alton Railroad), unemployment insurance (Steward Machine Co. v. Davis), and the minimum wage (West Coast Hotel v. Parrish). For his conservatism, he was known as one of the Four Horsemen, along with Pierce Butler, James Clark McReynolds, and George Sutherland; the four would dominate the Supreme Court for over two decades.[5]

Van Devanter had chronic writer's block[6]—even characterized as "pen paralysis"[7]—and, as a result, he wrote fewer opinions than any of his brethren, averaging three a term during his last decade on the Court.[8] He rarely wrote on constitutional issues.[7] However, he was widely respected as an expert on judicial procedure. In December 1921, Chief Justice Taft appointed him, along with Justices McReynolds and Sutherland, to draw up a proposal that would amend the nation's Judicial code and which would define further the jurisdiction of the nation's circuit courts. Known widely as "the Judges' Bill", it retained mandatory jurisdiction over cases that raised questions regarding federal jurisdiction. It called for the circuit courts of appeal to have appellate jurisdiction to review "by appeal or writ of error" final decisions in the district courts, as well as for the district courts for Alaska, Hawaii, Puerto Rico, China, the Virgin Islands and the Canal Zone. The circuit courts were also empowered to modify, enforce or set aside orders of the Federal Communications Commission, the Interstate Commerce Commission, the Federal Reserve Board and the Federal Trade Commission. The proposed bill further provided that 'a final judgment or decree in any suit in the highest court of a state in which a decision in the suit could be had, "where is drawn in question the validity of a treaty or statute of the United States may be reviewed by the Supreme Court on a writ of error." Lastly, cases involving final decrees which brought into question the validity of a wide range of Federal or state treaties would come to the Court by certiorari. Four justices would be required to vote affirmatively to accept petitions, which meant that the Court's agenda would now by enrolled by "judicial review." The Chief Justice, together with the three Justices, made repeated trips to Congress, and in 1925, after debating it for two years, the new Code was passed. 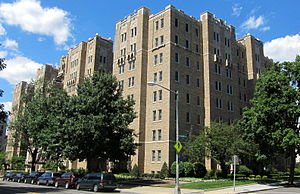 Van Devanter retired as a Supreme Court Justice on May 18, 1937,[5] after Congress voted full pay for justices over seventy who retired.[9] He acknowledged that he might have retired five years earlier due to illness, if not for his concern about New Deal legislation, and that he depended upon his salary for sustenance.[2] In 1932, five years prior to Van Devanter's retirement, Congress had halved Supreme Court pensions.[10] Congress had temporarily restored them to full pay in February 1933,[10] only to see them halved again the next month by the Economy Act.[11] Van Devanter was replaced by Justice Hugo Black, appointed by Franklin Delano Roosevelt.[12]

He died in Washington, D.C., and was buried there in Rock Creek Cemetery. His gravesite is marked by "a stark 'VAN DEVANTER' — nothing else" which tops the family plot.[13][14] However, his grave does have his name and dates on the stone.[15]

At the turn of the century, William Van Devanter purchased Pate Island in the Woods Bay area of Georgian Bay in Ontario, Canada. He owned it until it was sold about 1939 to Senator Dennis. T. Flynn of Oaklahoma City. He and his wife Dolly enjoyed their summers in an area that was a favorite summer retreat for members of the American legal fraternity. William Van Devanter was a keen sportsman who enjoyed hunting and fishing.[16]

Van Devanter's personal and judicial papers are archived at the Manuscript Division of the Library of Congress, where they are available for research.