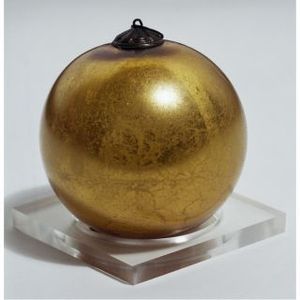 A witch ball is a hollow sphere of colored glass traditionally used as a fishing float. Modern witches balls are decorative replicas. Some are made to look like Christmas tree baubles that contain a few thin fibers strung inside. Floating glass buoys became connected with witches during the witch hunts in England. In the late 17th century, suspected witches were tried by being tied up and thrown into water. If the water rejected them from a second baptism and they floated, then the suspects were confirmed as witches, under the rule of trial by water, and they were then hung by the neck until dead. [1] In a like manner these heavy glass fishing floats, all tied up in a net, could not be made to sink. The water rejected them and they bobbed merrily upon its surface. Historically, witch's balls were hung in cottage windows in 17th and 18th century England to ward off evil spirits, witches, evil spells, ill fortune and bad spirits.[2] Just as hanging a witch was believed to remove evil influences from a village, hanging a tried and tested witch's ball that had been floating in water, around a home, was believed to protect the home from similar ills. Usage has continued to a smaller extent in America up to the present day. 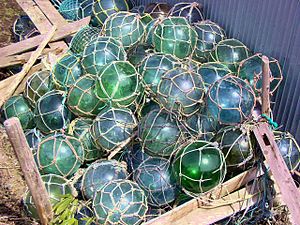 The witch ball originated among cultures where harmful magic and those who practiced it were feared. They are one of many folk practices involving objects for protecting the household. The word witch ball may be a corruption of watch ball because it was used to ward off, guard against, evil spirits. They may be hung in an eastern window, placed on top of a vase or suspended by a cord (as from the mantelpiece or rafters). They may also be placed on sticks in windows or hung in rooms where inhabitants wanted to ward off evil.[3]

Superstitious European sailors valued the talismanic powers of the witch's balls in protecting their homes. Witch balls appeared in America in the 19th century and larger, more opaque variations are often found in gardens under the name gazing ball. This name derives from their being used for divination and scrying where a person gazes into them dreamily to try to see future events or to see the answers to questions. However, gazing balls contain no strands within their interior. Glass studios traditionally make a witch ball as the first object to be created in a new studio.[citation needed]

There are several variations relating to the purpose of witch balls. According to folk tales, witch balls would entice evil spirits with their bright colours; the strands inside the ball would then capture the spirit and prevent it from escaping. Another tradition holds that witch balls or spherical mirrors prevented a witch from being in a room, because witches supposedly did not have a reflection or could not bear seeing their own reflection.[2] Yet another variation contends that witch balls were used to avert the evil eye, by attracting the gaze of the eye and preventing harm to the house and its inhabitants.[4]

In the 17th century, witch balls and witch bottles were filled with holy water or salt.[5] Balls containing salt were hung up in the chimney to keep the salt dry. Salt was a precious commodity, and breaking the ball or bottle was considered bad luck.[6]

An example of a blue witchball

Witch balls sometimes measure as large as seven inches (18cm) in diameter. The witch ball is traditionally, but not always, green or blue in color and made from glass (others, however, are made of wood, grass, or twigs instead of glass). Some are decorated in swirls and brilliant stripes of various colors. Witch balls normally have a hole in the top where a peg can be inserted; string is then attached to the peg so the ball can be hung in a chimney or over a window. Early witch balls often had a short neck sealed by a stopper.[6] The gazing balls found in many of today's gardens are derived from the silvered witch balls that acted as convex mirrors, warding off evil by reflecting it away.

In the Ozark Mountains, another kind of witch ball is made from black hair that is rolled with beeswax into a hard round pellet about the size of a marble and is used in curses. In Ozark folklore, a witch that wants to kill someone will take this hair ball and throw it at the intended victim; it is said that when someone in the Ozarks is killed by a witch's curse, this witch ball is found near the body.

In the Appalachian Mountains of Kentucky, tradition holds that witch balls were made by rolling cow or horse hair into a small ball. A witch would draw a picture of the intended victim, then throw the ball at the part of the victim they wished to injure.[7]

It is sometimes claimed that the modern Christmas ornament ball is descended from the witch ball. The ornament was allegedly originally placed on the tree to dispel a visitor’s envy at the presents left beneath the tree. However, as the modern Christmas bauble's origins are documented in Lauscha, Germany in 1847, the provenance of this claim is debatable.