Yakima (/ˈjækᵻmɑː/ or /ˈjækᵻmə/) is a US city located about 60 miles southeast of Mount Rainier in Washington. Yakima is the county seat of Yakima County, Washington, and the state's ninth largest city by population. As of the 2010 census, the city had a total population of 91,067 and a metropolitan population of 243,231.[6] The unincorporated suburban areas of West Valley and Terrace Heights are considered a part of greater Yakima.[7]

Yakima is situated in the Yakima Valley, an extremely productive agricultural region noted for apple, wine and hop production. As of 2011, the Yakima Valley produces 77% of all hops grown in the United States.[8] The name Yakima originates from the Yakama Nation, located south of the city.

The Yakama people were the first known inhabitants of the Yakima Valley. In 1805, the Lewis and Clark Expedition came to the area and discovered abundant wildlife and rich soil, prompting the settlement of homesteaders.[9] A Catholic Mission was established in Ahtanum, southwest of present-day Yakima, in 1847.[10] The arrival of settlers and their conflicts with the natives resulted in the Yakima War. The U.S. Army established Fort Simcoe in 1856 near present-day White Swan as a response to the uprising. The Yakamas were defeated and forced to relocate to the Yakama Indian Reservation.

Yakima County was created in 1865. When bypassed by the Northern Pacific Railroad in December 1884, over 100 buildings were moved with rollers and horse teams to the nearby site of the depot. The new city was dubbed North Yakima and was officially incorporated and named the county seat on January 27, 1886. The name was changed to Yakima in 1918. Union Gap was the new name given to the original site of Yakima. 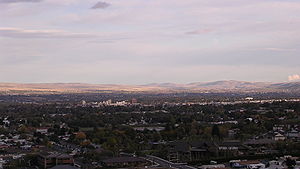 Yakima, Washington as seen from the west.

The cities of Selah and Union Gap lie immediately to the north and south of Yakima. In addition, the unincorporated suburban areas of West Valley and Terrace Heights are considered a part of greater Yakima. With these cities included in the immediate area, population within 20 miles of the city is over 123,000. Other nearby cities include Moxee, Tieton, Cowiche, Wiley City, Tampico, Gleed, and Naches in the Upper Valley, as well as Wapato, Toppenish, Zillah, Harrah, White Swan, Parker, Buena, Outlook, Granger, Mabton, Sunnyside, and Grandview in the Lower Valley. As of the 2013, the estimated population of the metropolitan area is 247,044.

The primary irrigation source for the Yakima Valley, the Yakima River, runs through Yakima from its source at Lake Keechelus in the Cascade Range to the Columbia River at Richland. In Yakima, the river is used for both fishing and recreation. A 10-mile (16 km) walking and cycling trail, a park, and a wildlife sanctuary are located at the river's edge.

The Naches River forms the northern border of the city. Several small lakes flank the northern edge of the city, including Myron Lake, Lake Aspen, Bergland Lake (private) and Rotary Lake (also known as Freeway Lake). These lakes are popular with fishermen and swimmers during the summer.

There were 33,074 households of which 33.2% had children under the age of 18 living with them, 44.7% were married couples living together, 15.7% had a female householder with no husband present, 6.3% had a male householder with no wife present, and 35.3% were non-families. 28.7% of all households were made up of individuals and 11.9% had someone living alone who was 65 years of age or older. The average household size was 2.68 and the average family size was 3.3.

Yakima is currently embroiled in a lawsuit over redistricting its city council seats. Despite having an over 40% Hispanic population, Yakima has never elected a Hispanic to the city council. After resisting efforts to voluntarily redistrict, Yakima was sued by the ACLU in Federal Court and lost on summary judgement. The case is being appealed, though the election will go forward this fall for an all new city council, with two Latino majority districts.[18] On November 3, 2015, three Hispanic candidates were elected to the city council for the first time in history. In addition to the redistricting ordered by the court, the Democratic Party conducted an aggressive door-to-door campaign to increase voter turnout in the Hispanic majority districts.[19]

In 1994 and 2015, the City of Yakima received the All-America City Award, given by the National Civic League. Ten U.S. cities receive this award per year.

The Sun Dome was home to the Warriors and Sun Kings.

Interstate 82 is the main highway through Yakima. The highway runs north and south, but is sign-posted east and west. Northbound traffic is posted west, since this heads towards Seattle, and southbound traffic is posted east since this heads towards Salt Lake City. U.S. Route 12 crosses through the city from White Pass. U.S. Route 97 joins I-82 from Yakima for approximately 40 miles (64 km) north to Ellensburg. State Route 24 terminates at Yakima and is the primary means of reaching Moxee City and many of the area's agricultural areas to the east. State Route 821 terminates near Yakima and is also called Canyon Road because it passes through the Yakima River canyon. It is an alternate route to Ellensburg which bypasses the I-82 summit at Manastash Ridge.

The airport is home to numerous private aircraft, and is a popular test site for military jets and Boeing test flights. Several businesses are located at the airport including Hertz Car Rental, Budget Rent a Car, Airporter Shuttle, Cub Crafters and several freight companies.

Yakima's growth in the 20th century was fueled primarily by agriculture. The Yakima Valley produces many fruit crops, including apples, peaches, pears, cherries, and melons. Many vegetables are also produced, including peppers, corn and beans. Most of the nation's hops, a key ingredient in the production of beer, are also grown in the Yakima Valley. Many of the city's residents have come to the Valley out of economic necessity and to participate in the picking, processing, marketing and support services for the agricultural economy.

Downtown Yakima, long the retail hub of the region, has undergone many changes since the late 1990s. Three major department stores, and an entire shopping mall that is now closed, have been replaced by a Whirlpool Corporation facility, an Adaptis call center, and several hotels.

The region's retail core has shifted to the town of Union Gap, where a renovated shopping mall and other new retail businesses are flourishing. While some see big-box retail leaving the downtown area as a loss, others see it as an opportunity to recast the downtown area as a center for events, services, entertainment, and smaller, more personal shopping experiences. One part of this effort has been the Downtown Futures Initiative.[25] The DFI has provided for street-to-storefront remodeling along Yakima Avenue throughout the entire downtown core, and includes new pedestrian-friendly lighting, water fountains, planters, banner poles and new trees and hanging baskets, all of which complement the new paver-inlaid sidewalks.

The Yakima Training Center, between Yakima and Ellensburg, is a United States Army training center. It is used primarily for maneuver training and land warrior system testing, and has a live-fire area. Artillery units from the Canadian Armed Forces based in British Columbia, as well as the Japan Ground Self Defense Force, conduct annual training in Yakima. Japanese soldiers train there because it allows for large-scale live-fire maneuvers not available in Japan. Similarly, it is the closest impact area for the Canadian Gunners, the next closest being in Wainwright, Alberta.

In the early 2000s, the city of Yakima, in conjunction with multiple city organizations, began revitalization and preservation efforts in its historic downtown area. The Downtown Yakima Futures Initiative was created to make strategic public investments in sidewalks, lighting and landscaping to encourage further development. As a result, local businesses featuring regional produce, wines, and beers, among other products, have returned to the downtown area. Many of these business are located on Front Street, Yakima Avenue and 1st Street.[citation needed]

During the summer, a pair of historic trolleys operate along five miles (8 km) of track of the former Yakima Valley Transportation Company through the Yakima Gap connecting Yakima and Selah. The Yakima Valley Trolleys organization, incorporated in 2001, operates the trolleys and a museum for the City of Yakima.

There are five high schools in the Yakima School District:

Yakima Valley Community College (YVCC) is one of the oldest community colleges in the state of Washington. Founded in 1928, YVCC is a public, two-year institution of higher education, and part of one of the most comprehensive community college systems in the nation. It offers programs in adult basic education, English as a Second Language, lower-division arts and sciences, professional and technical education, transfer degrees to in-state universities, and community services.[citation needed]

Pacific Northwest University of Health Sciences opened in the fall of 2008,[29] and graduated its first class of osteopathic physicians (D.O.) in 2012. The university has plans to open a PsyD program (clinical psychology) and a masters program in physician assistant studies.[30] The first college on the 42.5-acre (172,000 m2) campus is home to the first medical school approved in the Pacific Northwest in over 60 years, and trains physicians with an osteopathic emphasis. The school's mission is to train primary-care physicians committed to serving rural and underserved communities throughout the Pacific Northwest. It is housed in a state-of-the-art 45,000-square-foot (4,200 m2) facility.[31]

Yakima is served by a diverse variety of print and broadcast media. The Yakima Herald-Republic is the primary daily newspaper in the area.

According to Arbitron, the Yakima metropolitan area is the 197th largest radio market in the US, serving 196,500 people.[32]

Yakima is part of the U.S.'s 123rd largest television viewing market, which includes viewers in Pasco, Richland and Kennewick.[33]