listen), literally "The Duke's Forest" in English, and historically in French: Bois-le-Duc) is a city and municipality in the southern Netherlands. It is the capital of the province of North Brabant.

In speech, the Dutch seldom use the formal 's-Hertogenbosch but rather the colloquial Den Bosch [dɛmˈbɔs] (

's-Hertogenbosch in the 16th century

The city's official name is a contraction of the Dutch des Hertogen bosch—"the Duke's forest". The duke in question was Henry I, Duke of Brabant, whose family had owned a large estate at nearby Orthen for at least four centuries. He founded a new town located on some forested dunes in the middle of a marsh. At age 26, he granted 's-Hertogenbosch city rights and the corresponding trade privileges in 1185. This is, however, the traditional date given by later chroniclers; the first mention in contemporaneous sources is 1196. The original charter has been lost. His reason for founding the city was to protect his own interests against encroachment from Gelre and Holland; from its first days, he conceived of the city as a fortress. It was destroyed in 1203 in a joint expedition of Gelre and Holland, but was soon rebuilt. Some remnants of the original city walls may still be seen. In the late 15th century, a much larger wall was erected to protect the greatly expanded settled area. Artificial waterways were dug to serve as a city moat, through which the rivers Dommel and Aa were diverted.

Until 1520, the city flourished, becoming the second largest population centre in the territory of the present Netherlands, after Utrecht. The birthplace and home of one of the greatest painters of the northern Renaissance, Hieronymus Bosch, the city was also a center of music, and composers, such as Jheronimus Clibano, received their training at its churches. Others held positions there: Matthaeus Pipelare was musical director at the Confraternity of Our Lady; and renowned Habsburg copyist and composer Pierre Alamire did much of his work at 's-Hertogenbosch.

The wars of the Reformation changed the course of the city's history. It became an independent bishopric. During the Eighty Years' War, the city took the side of the Habsburg (Catholic) authorities and thwarted a Calvinist coup. It was besieged several times by Prince Maurice of Orange, stadtholder of most of the Dutch Republic, who wanted to bring 's-Hertogenbosch under the rule of the rebel United Provinces. The city was successfully defended by Claude de Berlaymont, also known as Haultpenne.

In the years of Truce, before the renewed fighting after 1618, the fortifications were greatly expanded. The surrounding marshes made a siege of the conventional type impossible, and the fortress, deemed impregnable, was nicknamed the Marsh Dragon. The town was nevertheless finally conquered by Frederik Hendrik of Orange in 1629 in a typically Dutch stratagem: he diverted the rivers Dommel and Aa, created a polder by constructing a forty-kilometre dyke and then pumped out the water by mills. After a siege of three months, the city had to surrender—an enormous blow to Habsburg geo-political strategy during the Thirty Years' War. This surrender cut the town off from the rest of the duchy and the area was treated by the Republic as an occupation zone without political liberties (see also Generality Lands).

After the Peace of Westphalia, the fortifications were again expanded. In 1672, the Dutch rampjaar, the city held against the army of Louis XIV of France. In 1794, French revolutionary troops under command of Charles Pichegru took the city with hardly a fight: in the Batavian Republic, both Catholics and Brabanders at last gained equal rights. 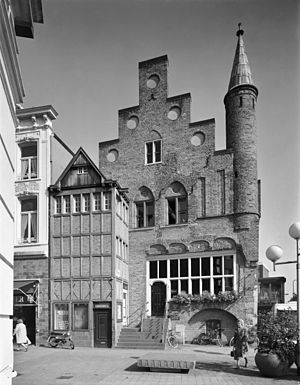 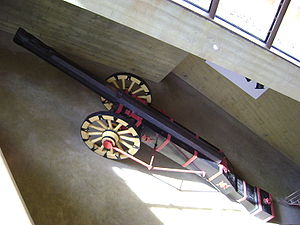 Boze Griet, a forged cannon from 1510 in the Bastionder museum

From 1806, the city became part of the Kingdom of Holland and, from 1810, it was incorporated into the French Empire. It was captured by the Prussians in 1814. The next year, when the United Kingdom of the Netherlands was established, it became the capital of North Brabant. Many newer and more modern fortresses were created in the vicinity of the city. Until 1878 it was forbidden to build outside the ramparts. This led to overcrowding and the highest infant mortality in the kingdom. The very conservative city government prevented industrial investment—they didn't want the number of workers to grow—and the establishment of educational institutions—students were regarded as disorderly. As a result, the relative importance of the city diminished.

World War II and after

One of the few official Nazi concentration camp complexes in western Europe located outside Germany and Austria was named after 's-Hertogenbosch. It operated from January 1943, to September 1944 and was known to the Germans as Herzogenbusch (see List of subcamps of Herzogenbusch). About 30,000 inmates were interned in the complex during this time, of whom about 12,000 were Jews. In the Netherlands, this camp is known as 'Kamp Vught', because the concentration camp was actually located at a heath near Vught, a village a few kilometres south of 's-Hertogenbosch.

Conquered by the Germans in World War II (1940), with its railway station bombed by planes of the Royal Air Force on 16 September 1944, it was liberated in 24–27 October 1944 by British soldiers of the 53rd (Welsh) Infantry Division after Major Donald Bremner of the 1st Battalion, East Lancashire Regiment, of 158th Infantry Brigade, had already routed the enemy on 23/24th.[7] 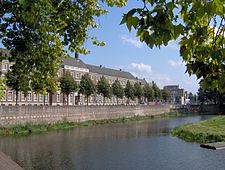 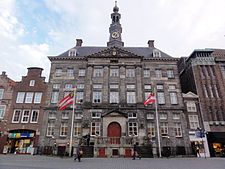 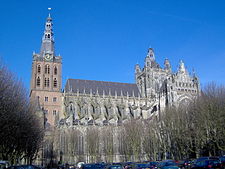 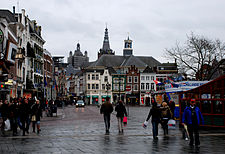 's-Hertogenbosch was founded as a fortified city and that heritage can still be seen today. After World War II, plans were made to modernise the old city, by filling in the canals, removing or modifying some ramparts and redeveloping historic neighbourhoods. Before these plans could come to effect however, the central government declared the city a protected townscape. Most historic elements have been preserved. Because the main ramparts are crucial in keeping out the water, they have never been slighted, their usual fate in the Netherlands. In contrast to cities like Rotterdam, 's-Hertogenbosch also survived the Second World War relatively unscathed. Much of its historic heritage remains intact, and today there are always renovations going on in the city to preserve the many old buildings, fortifications, churches and statues for later generations. In 2004 the city was awarded the title European Fortress City of the year. It is planned to restore the city defences to much of their old glory in the coming years. 's-Hertogenbosch also has the oldest remaining brick house in the Netherlands, 'de Moriaan',[8] which was built at the beginning of the 13th century. In the 1960s, de Moriaan was renovated to its former glory based on a famous 16th-century Dutch painting called 'De Lakenmarkt van 's-Hertogenbosch' ('The fabric market of 's-Hertogenbosch').[9] In the north of the old city, the hexagonal powder arsenal, or Kruithuis,[10] still exists, one of only two of its kind in the country. The Townhall is an originally 14th-century Gothic building, transformed in the typical style of Dutch classicism in the 17th century. Around the city itself many other fortresses can still be seen. Until recently it was a major garrison town.

The old city of 's-Hertogenbosch is still almost completely surrounded by continuous ramparts. On the south side, this wall still borders on an old polder, kept intact as a nature reserve, that stretches all the way to Vught. These city walls are currently undergoing renovations. Hidden below the old city is a canal network called the Binnendieze that once spanned 22 km (14 mi). It started out as a regular river, the Dommel, running through the city in medieval times but due to lack of space in the city, people started building their houses and roads over the river. In later times it functioned as a sewer and fell into disrepair. In recent decades, the remaining sixth of the old waterway system has been renovated, and it is possible to take several guided subterranean boat trips through it.

's-Hertogenbosch is also home to Saint John's Cathedral (Sint Jans kathedraal in Dutch), which dates from c. 1220 and is best known for its Brabantine Gothic design and the many sculptures of craftsmen that are sitting on almost every arc and rim along the outside of the cathedral. In 2010 an extensive restoration was completed, undoing the damage of many years of wear-and-tear and acid rain.

The city is also the location of the Bolwoningen complex, an array of fifty experimental spherical houses designed by Dries Kreijkamp.[11]

The city of 's-Hertogenbosch has become a center of industry, education, administration and culture. It is currently the fourth city of Noord Brabant. It is home to many national and international businesses such as Heineken, Epic, Tyco International and many others. 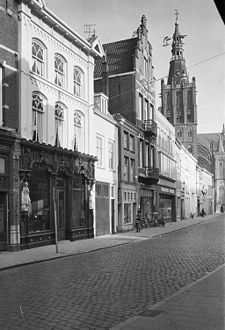 's-Hertogenbosch is home to a variety of events such as the theatre festival Boulevard, Jazz in Duketown, and hip hop in duketown, the start of the Tour de France (1996), Tour Feminin (1997), the International Vocal Competition, November Music (a contemporary music festival) and the UNICEF Open (formerly the Ordina Open) grass court tennis tournament (in the nearby town of Rosmalen). There are also over 350 restaurants, pubs and cafés to be found in the city.

's-Hertogenbosch is also home to the European Ceramic Work Centre. This is a juried international ceramic residency where they invite artists, designers and architects from around to the world to explore the medium of Ceramics. This program was initially started in 1991 and continues to this day.

The city has its own food speciality, the Bossche Bol—effectively a giant profiterole, somewhat larger than a tennis ball, which is filled with whipped cream and coated with chocolate.

The spoken language is Maaslands (The variant spoken in 's-Hertogenbosch is called Bosch which is placed among the Central North Brabantian dialects, although other classification systems also describe it as East Brabantian), which is very similar to colloquial Dutch.[12]

De Toonzaal is a music venue for chamber music, improvised music, and experimental music. For popular music there is the venue W2 (or Willem II).

Once a year, 's-Hertogenbosch changes its name to "Oeteldonk". Contrary to popular belief, "oetel" in the name "Oeteldonk" is not a referral to a frog but is a facetious reference to the 's-Hertogenbosch Bishop Adrianus Godschalk who came from the village of Den Dungen, and he often fulminated against the 'pagan' Carnival festivities. Van den Oetelaar was a very common name in Den Dungen at that time. "Donk" is a reference to a dry place in the marsh. The frog is however a symbol often used during Carnival, and it is a symbol of the Oeteldonk Marsh.[13] 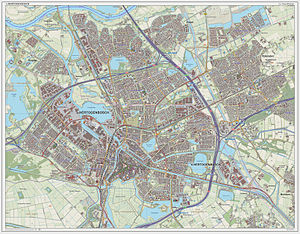 Dutch Topographic map of 's-Hertogenbosch, as of March 2014 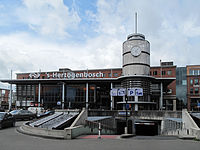 Like most Dutch cities, 's-Hertogenbosch is well adapted to the high number of cyclists. A large network of bike paths make it convenient to cycle to various destinations and within the town the bike is the most popular mean of transportation. In 2011, the city was chosen as Fietsstad 2011 — the top BikeCity of the Netherlands for 2011.

As for trains, 's-Hertogenbosch has three railway stations:

As for buses, Arriva buslines serve the city and most of its suburbs.

Climate in this area has mild differences between highs and lows, and there is adequate rainfall year round. The Köppen Climate Classification subtype for this climate is "Cfb". (Marine West Coast Climate/Oceanic climate).[14]