From Infogalactic: the planetary knowledge core
(Redirected from Álvaro de Bazán)
Jump to: navigation, search
This article is about the 16th century Spanish admiral. For other uses, see Álvaro de Bazán (disambiguation).

Álvaro de Bazán, 1st Marquis of Santa Cruz de Mudela (December 12, 1526 – February 9, 1588), was a Spanish admiral. According to Spanish sources, he was never defeated, a remarkable achievement in a fifty-year long career. His personal galley, La Loba (The She-Wolf), thus called by her golden figurehead, was feared by Spanish enemies and regarded with hope amongst Spanish sailors and allies.

His grandfather, Álvaro de Bazán, took part in the conquest of Granada in 1492, and his father, Álvaro de Bazán the Elder, took part together with Giovanni Andrea Doria and others marines in the recapture of Tunis in 1535, and was distinguished in the service of Charles V, by whom he was made general of the galleys or commander-in-chief of the Spanish naval forces in the Mediterranean.[1]

The future admiral followed his father in his youth, and was employed in the high command of the Spanish navy at a very early age. At the age of eight he was appointed "Military Governor and captain of the fortress and city of Gibraltar". His command however was via his father who was in commands of the galleys of Spain. It has been speculated that this unusual appointment was intended to show Charles V's confidence but the commander of the galleys did not share that confidence and he suggested to no effect that Gibraltar's Line Wall Curtain be extended to the southern tip of the rock.[2] He was a member of the Military Order of Santiago (St. James). In 1564, he aided in the capture of Peñón de Vélez de la Gomera, and commanded the division of galleys employed to blockade Tetuan, and to suppress the piracy carried on from that port. The service is said to have been successfully performed. Bazán certainly earned the confidence of Philip II, by whom he was appointed to command the galleys of Naples in 1568. This post brought him into close relations with John of Austria, when the Holy League was formed against the Turks in 1570.[1]

During the operations which preceded and followed the Battle of Lepanto (October 7, 1571), Bazán was always in favor of the more energetic course. In the battle he commanded the reserve division, and his prompt energy averted a disaster when Uluj Ali, who commanded the left wing of the Turks, outmaneuvered the commander of the Christian right, Gian Andrea Doria, the nephew of his old comrade Andrea Doria, and broke the Allied line. He accompanied Don John of Austria at the taking of Tunis in the following year.[1] 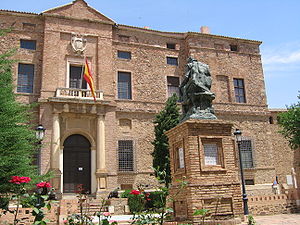 When Philip II enforced his claim as heir to the crown of Portugal in 1580–1581, Santa Cruz held a naval command. But António, Prior of Crato, an illegitimate representative of the former Portuguese royal family, who conducted some popular resistance to the crowning of what was seen as a foreign king, continued to hold the islands of the Azores. António was supported by a number of French adventurers under Philip Strozzi, a Florentine exile in the service of France. Santa Cruz was sent as "Admiral of the Ocean" to drive the pretender and his friends away in 1582.[1] Badly outnumbered, he won the Battle of Ponta Delgada off Terceira Island against a loose confederation of Portuguese, French, English and Dutch adventurers and privateers, which decided the struggle for the Azores in favor of the Spanish Habsburgs.

Santa Cruz, who recognized that England presented a grave threat to Spain's empire, became a zealous advocate of war. A letter written by him to King Philip from Angra do Heroísmo in Terceira, on August 9, 1583, contains the first definite suggestion of the Spanish Armada. 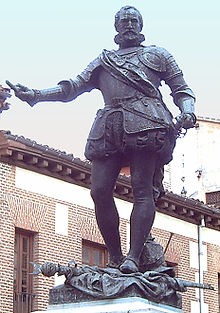 Santa Cruz himself was to have commanded. His plans, schemes and estimates occupy a conspicuous place in the documents concerning the Armada collected by Don Cesário Duro. The hesitating character of the king, and his many embarrassments, political and financial, caused many delays, and left Santa Cruz unable to act with effect. He was at Lisbon without the means of fitting out his fleet, when Francis Drake burnt the Spanish ships at Cádiz during his 1587 expedition. The independence of judgment shown by Santa Cruz ended by offending the king, and he was held responsible for the failures and delays which were the result of the bad management of his master. His death, which occurred on February 9, 1588 at Lisbon, was said to have been hastened by the unjustified reproaches of the king.[1]

The great galleons employed to carry the trade between Cádiz in Spain and Vera Cruz in Mexico were the joint creation of the Marquis de Santa Cruz and Pedro Menéndez de Avilés.[3]

The documents relating to the Spanish Armada have been collected by Don Cesáreo Fernández Duro in La Armada Invencible, and he gives a biography of the marquis in his Conquista de las Islas Azores. A separate life has been published by Don Ángel de Altolaguirre. There are various notices of Santa Cruz in Sir W. Stirling Maxwell's Don John of Austria.

She was taken by the Naples captain-galley, called La Loba (The She-Wolf), commanded by that lightning of war, by the father of soldiers, for that fortunate and never defeated captain, Don Álvaro de Bazán, marquis of Santa Cruz.

In the episode "The Enterprise of England" in the 1971 BBC series Elizabeth R, he is portrayed by Geoffrey Wincott in an historically accurate script, in which King Philip's meddling clearly dooms his plans and exacerbates his declining health.