From Infogalactic: the planetary knowledge core
Jump to: navigation, search
For the historical Åbo Akademi, now known as University of Helsinki, see Royal Academy of Åbo. 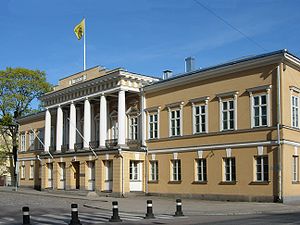 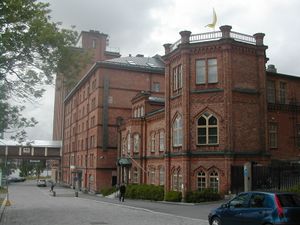 Åbo Akademi University (Swedish: Åbo Akademi Swedish pronunciation: [ˈoːbu akadeˈmiː]) is the only exclusively Swedish language university in Finland. It is located in Turku (Åbo is the Swedish name of the city). As of 2004[update], there are 7 941 students and a staff consisting of 1 125 people. The university has activities not only in Turku, but also in Vaasa, Jakobstad, Helsinki and on Åland. Åbo Akademi was a private institution until 1981, when it was turned into a public institution.

Åbo Akademi should not be confused with the Royal Academy of Åbo, which was founded in 1640, but moved to Helsinki after the Turku fire of 1827 and is today known as the University of Helsinki.

As the only uni-lingually Swedish multi-faculty university in the world outside Sweden and consequently the only one in Finland, Åbo Akademi University is responsible for higher education for a large proportion of the Swedish-speaking population. This role has many implications for education and research as well as for the social environment. As there are few students in most subjects, cooperation between faculties and with other universities is very important.

A significant minority of the students are Finnish-speaking. While Turku in itself is mostly Finnish, the university provides a strong Swedish environment. Most of the students, regardless of original language, will be functionally bilingual when finishing their studies.

The university consists of four faculties:

In addition, there are several other units and joint programs, such as:

When the university was turned into a public institution the foundation Stiftelsen för Åbo Akademi remained. Besides maintaining many of the university buildings, it is also a significant donor. Because of new legislation regarding higher education, it is planned to turn universities in Finland into semi-private institutions.