From Infogalactic: the planetary knowledge core
Jump to: navigation, search
For other people of the same name, see Ælfthryth.

Ælfthryth (c. 945 – 1000 or 1001, also Alfrida, Elfrida or Elfthryth) was the second or third wife of King Edgar of England. Ælfthryth was the first king's wife known to have been crowned and anointed as Queen of the Kingdom of England. Mother of King Æthelred the Unready, she was a powerful political figure. She was linked to the murder of her stepson King Edward the Martyr and appeared as a stereotypical bad queen and evil stepmother in many medieval histories.

Ælfthryth was the daughter of Ealdorman Ordgar. Her mother was a member of the royal family of Wessex. The family's power lay in the west of Wessex. Ordgar was buried in Exeter and his son Ordwulf founded, or refounded, Tavistock Abbey.[1]

Ælfthryth was first married to Æthelwald, son of Æthelstan Half-King as recorded by Byrhtferth of Ramsey in his Life of Saint Oswald of Worcester.[2] Later accounts, such as that preserved by William of Malmesbury, add vivid detail of unknown reliability.

According to William, the beauty of Ordgar's daughter Ælfthryth was reported to King Edgar. Edgar, looking for a Queen, sent Æthewald to see Ælfthryth, ordering him "to offer her marriage [to Edgar] if her beauty were really equal to report." When she turned out to be just as beautiful as was said, Æthelwald married her himself and reported back to Edgar that she was quite unsuitable. Edgar was eventually told of this, and decided to repay Æthelwald's betrayal in like manner. He said that he would visit the poor woman, which alarmed Æthelwald. He asked Ælfthryth to make herself as unattractive as possible for the king's visit, but she did the opposite. Edgar, quite besotted with her, killed Æthelwald during a hunt.[3]

The historical record does not record the year of Æthelwald's death, let alone its manner. No children of Æthelwald and Ælfthryth are known.

Edgar had two children before he married Ælfthryth, both of uncertain legitimacy. Edward was probably the son of Æthelflæd, and Eadgifu, later known as Saint Edith of Wilton, was the daughter of Wulfthryth.[4] Sound political reasons encouraged the match between Edgar, whose power base was centred in Mercia, and Ælfthryth, whose family were powerful in Wessex. In addition to this, and her link with the family of Æthelstan Half-King, Ælfthryth also appears to have been connected to the family of Ælfhere, Ealdorman of Mercia.[5]

Edgar married Ælfthryth in either 964 or 965. In 966 Ælfthryth gave birth to a son who was named Edmund. In King Edgar's charter (S 745) regranting privileges to New Minster, Winchester that same year, the infant Edmund is called "clito legitimus" (legitimate ætheling), and appears before Edward in the list of witnesses. Edmund died young, circa 970, but in 968 Ælfthryth had given birth to a second son who was called Æthelred.[6]

King Edgar organised a second coronation on 11 May 973 at Bath, perhaps to bolster his claim to be ruler of all of Britain. Here Ælfthryth was also crowned and anointed, granting her a status higher than any recent queen.[7] The only model of a queen's coronation was that of Judith of Flanders, but this had taken place outside England. In the new rite, the emphasis lay on her role as protector of religion and the nunneries in the realm. She took a close interest in the well-being of several abbeys, and as overseer of Barking Abbey she deposed and later reinstated the abbess.[8]

Ælfthryth played a large role as forespeca, or advocate, in at least seven legal cases. As such, she formed a key part of the Anglo-Saxon legal system as a mediator between the individual and the crown, which was increasingly viewing its role in the courts as a symbol of its authority as protector of its subjects. Ælfthryth's actions as forespeca were largely for the benefit of female litigants, and her role as a mediator shows the possibilities for women to have legal and political power in late Anglo-Saxon England.[9] 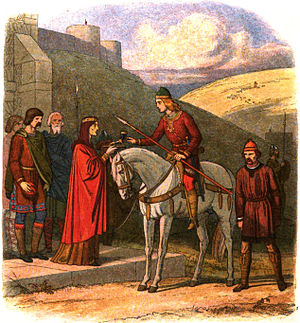 Edward the Martyr is offered a cup of mead by Ælfthryth, wife of Edgar, unaware that her attendant is about to murder him.

Edgar died in 975 leaving two young sons, Edward and Æthelred. Edward was almost an adult, and his successful claim for the throne was supported by many key figures including Archbishops Dunstan and Oswald and the brother of Ælfthryth's first husband, Æthelwine, Ealdorman of East Anglia. Supporting the unsuccessful claim of Æthelred were his mother, the Queen dowager, Bishop Æthelwold of Winchester, and Ælfhere, Ealdorman of Mercia.[10]

On 18 March 978, while visiting Ælfthryth at Corfe Castle, King Edward was killed by servants of the Queen, leaving the way clear for Æthelred to be installed as king. Edward was soon considered a martyr, and later medieval accounts blamed Ælfthryth for his murder. According to the Anglo-Saxon Chronicle, King Edward was murdered at Corfe Castle in 978. As the king developed into a cult figure, a body of literature grew up around his murder, at first implying and then accusing his step-mother, Queen Aelfthryth, of being responsible. The 12th century monastic chronicle the Liber Eliensis went so far as to accuse her of being a witch, claiming that she had murdered not only the king, but also Abbot Brihtnoth of Ely.[11]

Due to Æthelred's youth, Ælfthryth served as regent for her son until his coming of age in 984. By then her earlier allies Æthelwold and Ælfhere had died, and Æthelred rebelled against his old advisers, preferring a group of younger nobility. She disappears from the list of charter witnesses from around 983 to 993, when she reappears in a lower position. She remained an important figure, being responsible for the care of Æthelred's children by his first wife, Ælfgifu. Æthelred's eldest son, Æthelstan Ætheling, prayed for the soul of the grandmother "who brought me up" in his will in 1014.[12]

Although her reputation was damaged by the murder of her stepson, Ælfthryth was a religious woman, taking an especial interest in monastic reform when Queen. In about 986 she founded Wherwell Abbey as a Benedictine nunnery, and late in life she retired there. She died at Wherwell on 17 November 999, 1000 or 1001.[13]