Æthelstan (fl. 932 - 956), was an important and influential Ealdorman of East Anglia who interacted with five kings of England, including his adopted son Edgar the Peaceful. Many of Æthelstan's close relatives were also involved in important affairs, but soon after the death of king Eadred in 955, he left his position and became a monk at Glastonbury Abbey.

Æthelstan was the son of Æthelfrith an Ealdorman, who held lands in Somerset, Berkshire, and Middlesex.[1] His mother was Æthelgyth, daughter of Æthelwulf.[2] His brothers Ælfstan, Æthelwald, and Eadric, were Ealdormen of Mercia, of Kent, and of Wessex, respectively.[3]

The rise of Æthelstan's family began in the reign of King Edward the Elder, when Æthelfrith, whose family background is presumed to lie in Wessex, was appointed an Ealdorman in southern Mercia. Mercia was then ruled by Edward's sister Æthelflæd and her husband Æthelred.

Æthelstan seems to have been appointed Ealdorman of East Anglia and other parts by King Æthelstan in about 932, the lands King Æthelstan gave him had mostly been part of the Danelaw which had only been forced out the area after the Battle of Tempsford fifteen years earlier in 917, Æthelstan's brother Ælfstan became Ealdorman of some parts of Mercia at about the same time and both of them may have participated in king Æthelstan's invasion of Scotland in 934, his other brothers Eadric and Æthelwald were witnessing charters as Ealdormen by 940.

Æthelstan and his family were supporters of the monastic reforms of Saint Dunstan which introduced the Benedictine rule to Glastonbury. Both Glastonbury, and Abingdon Abbey, were endowed by Æthelstan.[4]

Æthelstan's wife was named Ælfwynn. Her family came from the east Midlands. She was foster-mother of King Edgar of England. Ælfwynn's lands would later endow Ramsey Abbey, refounded by Bishop Æthelwold of Winchester, Bishop Oswald of Worcester, and Æthelstan's son Æthelwine. Byrhtferth of Ramsey, author of a Life of Saint Oswald in the early 11th century, devoted considerable space to Æthelstan's family, several of whom were buried at Ramsey. The epithet Half-King comes from Byrhtferth's writings. Several members of the family were buried, or reburied, at Ramsey.

The position of Æthelstan and his brothers in the middle of the 10th century has been compared with the similar dominance of the family of Godwin, Earl of Wessex in the 11th.[5] It is possible that Æthelstan's withdrawal to Glastonbury may not have been a voluntary one.[6] However, the death of Æthelwald in 962 resulted in the family's offices in Wessex passing to their chief rivals, the family of Ealdorman Ælfhere. The result of this was that the two families were roughly equal in influence. Ælfhere's death in the early 970s did not result in a return of the old dominance of Æthelstan's family.[7] 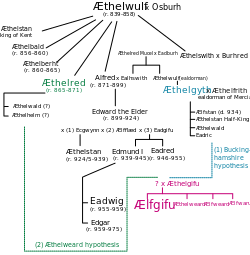 Æthelstan Half-King place in the family line of Æthelwulf. He is on the right, the second son of Æthelgylth

There is a hypothesis that Æthelstan's father, Æthelfrith, was the son of Æthelhelm, son of Æthelred I.

People associated with Æthelstan's family include Ealdorman Byrhtnoth, whose defeat at the Battle of Maldon is commemorated in verse.[8]