From Infogalactic: the planetary knowledge core
Jump to: navigation, search
File:Афсати.jpg
Statue of Æfsati, the Ossetian god of wild animals and patron of hunters, in the Ossetian mountains. 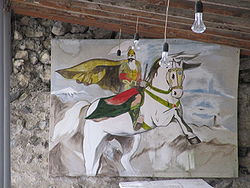 The Ossetians are an Eastern Iranic people of Alan-Scythian stock inhabiting a homeland in the Caucasus, now split between two states: the republic of North Ossetia–Alania within Russia, and the neighbouring, partly recognised state of South Ossetia (within Georgia).

In the Ossetian case, certain traditions of folk religion had survived with unbroken continuity, and were revived in rural areas. This contrasts, and interacts, with an urban and more intellectual movement which elaborated a systematic revival religion to overcome the crisis of identity of the Ossetian people, based in ethnic nationalism and opposition to both Russian and Georgian Orthodox Christianity, perceived as foreign, as well as the Islam professed by the neighboring Turkic and Caucasian ethnic groups and among a small minority of Ossetians. [3]

The Etseg Din movement is active both in North and South Ossetia. Whilst there are no figures about religious demographics for South Ossetia, in North Ossetia–Alania about 29% of the population adheres ethnic or folk religion according to 2012 survey statistics.[4]

Ætsæg literally means "exact", "true" in the Ossetian language. Din is a cognate of the Persian Daena (din in modern Persian), which represents "insight" and "revelation", and from this "conscience" and "religion", the Eternal Law or the order of the universe.

There are attempts to turn local traditional gods into objects of national worship in North Ossetia–Alania. For example, in former times, a grove was devoted to the local communal god/saint Khetag. After the clashes between Ossetians and Georgians in 1991-92, a glade near the wood was turned into a place for pan-Ossetian worship, including religious and political rituals, with activities supervised by the Great Council (Styr-nykhas), a non-governmental committee established in 1993.[5] The Khetag celebration was approved by the 1990s president of North Ossetia–Alania as a national holiday. A special foundation was established in order to raise funds for the reconstruction of the site, and since 1994 a big annual sacrifice is arranged at the Khetag shrine.[5]