French students who enter the École Spéciale Militaire de Saint-Cyr as cadets are about 21 years old, and undergo three years of training. All ESM cadets graduate with a master of arts or a master of science and are commissioned officers.[1][3]

The academy was founded in Fontainebleau in 1802 by Napoléon Bonaparte near Paris in the buildings of the Maison Royale de Saint-Louis, a school founded in 1685 by Louis XIV for impoverished daughters of noblemen who had died for France. The cadets moved several times more, eventually settling in Saint-Cyr, west of Paris, in 1808. 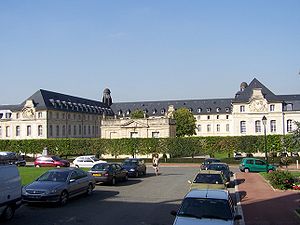 Lycée militaire de Saint-Cyr, seat of the Academy from 1808 to 1940, now in Camp Coëtquidan. 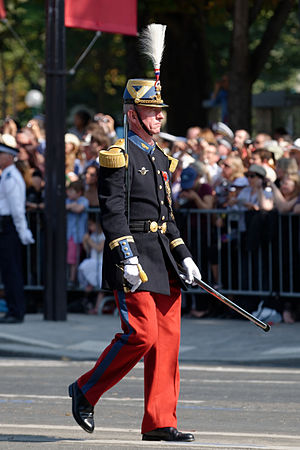 The colonel, supervisor of the Cadets' studies, during the Bastille Day Military Parade. 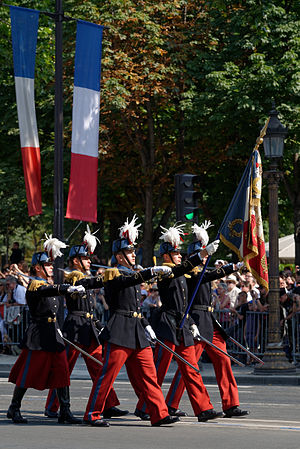 The Color guard of Saint-Cyr. 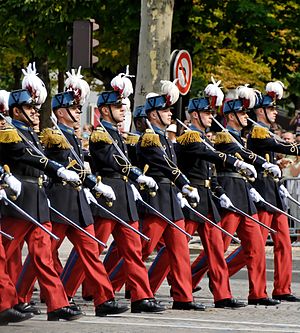 The 1st rank of the first company of cadets.

The École Spéciale Militaire was created by order of Napoleon Bonaparte on May 1, 1802 (the Law of 11 Floréal an X according to the then-official revolutionary calendar), to replace the École Royale Militaire then located in Fontainebleau. Renamed the École Spéciale Impériale Militaire after Bonaparte was proclaimed emperor, it moved in 1808 to Saint-Cyr-l'École (Yvelines) in the castle of the former Maison royale de Saint-Louis, a school for girls of the French nobility disbanded at the time of the Revolution.

The school trained a large number of young officers who served during the Napoleonic Wars. It remained stationed in Saint-Cyr-l'École after Napoleon's deposition and through all regime changes until 1940. After the defeat of the French Army against Germany in 1940, the school moved to the free zone, in the south of France, in Aix-en-Provence. After the invasion of the free zone by the Germans in 1942, the school was disbanded, but French cadet officer training went on, part in Cherchell (Algeria, then Free French territory) and part in the United Kingdom (Cadets de la France Libre) under General de Gaulle's command.

At the Libération of France in 1944, the school was reunited under the command of General de Lattre de Tassigny and settled in the military camp of Coëtquidan, Morbihan, because the "vieux bahut" (old school) had been severely damaged by an Allied bombing during the Libération campaign.

The École Spéciale Militaire de Saint-Cyr has remained there to this day. A reform in 1961 split the school into two entities: the current École Spéciale Militaire de Saint-Cyr (ESM), devoted to the training of direct-recruitment officers, recruited through an annual national competitive exam, and the École Militaire Interarmes (EMIA), cadets from internal recruitment (selected from non-commissioned officer (NCO) ranks and reserve officer ranks) and added a third entity, the École Militaire du Corps Technique et Administratif (EMCTA), devoted to the formation of administrative specialist officers. The school admitted its first female cadets in 1983 and underwent a minor reform in 2002 devised to broaden the diversity of its recruitment.

Since 1802, 65,000 Saint-Cyriens have been trained, along with 2,000 international cadets. Of the French graduates 9,639 died on the field of battle. Alumni also count 11 Maréchaux de France, three French heads of state, two flying aces, six members of the Académie Française, and one Blessed of the Catholic Church.

The school has links with both West Point and the Sandhurst Military Academy, including student exchanges.

Napoleon's original motto, "Ils s'instruisent pour vaincre" ("They study to overcome/conquer/win"), was changed by the restoration king, Louis XVIII, to: "Ils s'instruisent pour la Défense de la Patrie" ("They study for the Defence of the Fatherland"). The Napoleonic version was used again from 1848 to 1870. That motto was next changed to "Honneur et Patrie" ("Honour and Fatherland") until 1918, when it reverted again to the original Napoleonic wording.

Cadets of Saint-Cyr wear in full dress (grande tenue) a special uniform, derived from the 1845 Regulations Infantry Officer Dress. This dress incorporates a dark-blue tunic, red trousers and a shako with red and white plumes. Facings are light blue, as is the képi worn on less formal occasions. Red fringed epaulettes are worn by cadets and yellow by cadet-officers. This traditional uniform was worn by both cadets and instructors at Saint-Cyr from 1845 until 1914 and then again from 1930 until 1939. After World War II it was again adopted in 1950.

The shako plumes are nicknamed Casoars (southern cassowary), because they were first adopted in 1855 at the time of this colorful bird's first appearance in the Paris Zoo. While the plumes were not at first welcomed by the cadets, they have become a symbol of Saint-Cyr. The Saint-Cyr cadets of the class of 1913-14, graduating ahead of time with the outbreak of World War I, reportedly vowed to lead their platoons in battle wearing the casoar on their service kepis.

The various steps of the cadets' formation are celebrated in various ceremonies, all performed during nighttime. At the beginning of the first year, after boot camp, the cadets are welcomed with shakos granted to them by the third-year cadets. This is called the petit soir or "small night". At the end of the first year, the cadets are presented with the Casoar (the red and white plumes on their shakos) and with their officer's sword. This is the grand soir or "big night". At the end of the second year, cadets are officially commissioned second lieutenants. This is celebrated in the "baptism" (baptême) of the class, a ceremony in with every cadet receive the accolade from a senior officer. At the end of the third and final year, the cadets are promoted to the rank of lieutenant and receive their new insignia in a ceremony called the "triumph" (triomphe). This ceremony is also the time of solemn proclamation of the class name.

Using authentic battle gear and uniforms of the period, re-enactments of famous battles and ceremonies are regularly staged. The most famous of these is the Battle of Austerlitz, which took place on December 2, 1805 and has been celebrated since. The December, 2, nicknamed "2S" by the Saint-Cyr cadets, is the date of many Saint-Cyr related celebrations in the military or among the associations of alumni.

Cadets are recruited through a national annual competitive exam, after previous tertiary education. French students take exams on general knowledge, aptitude and intelligence; sit for an interview and pass a test of physical ability.

In addition, a number of foreign students are admitted annually.

The first-year involves military training and academics. The last two years focus on academics with one to three week breaks for military training. Officer cadets at St-Cyr are commissioned officers. The cadets attend school from September to July.

Upon graduation, cadets are awarded the diploma of Saint-Cyr, which is a master's degree in Strategy and Internationals Relations or Management, or an engineer's degree, depending on their major. Majors are in engineering or science subjects or specialization in classics, modern or ancient history, modern languages, applied modern languages, geography, science and economics, law, computer science, physical education, political science or Asian studies.

Graduates leave the school with the rank of lieutenant and join the specialist school of the branch they select for one additional year, before being assigned to a regiment to serve as a platoon leader.