Élisabeth Charlotte d'Orléans (13 September 1676 – 23 December 1744) was a French petite-fille de France and by marriage to Leopold, Duke of Lorraine, duchess and later regent of Lorraine and Bar. She was also suo jure Princess of Commercy. Among her children was Francis I, Holy Roman Emperor, a co-founder of the House of Habsburg-Lorraine.

Élisabeth Charlotte was born at the Château de Saint-Cloud outside Paris. She was the daughter of Philippe I, Duke of Orléans, Monsieur, and of his second wife, Elizabeth Charlotte of the Palatinate, Madame, the daughter of Charles I Louis, Elector Palatine. Her father was the only sibling of King Louis XIV of France. As a petite-fille de France, she was entitled to have the style of Her Royal Highness, as well as the right to an armchair in the presence of the King.[1] At birth, she was given the honorary style Mademoiselle de Chartres, taken from the name of one of her father's appanages. After the marriage of her two older half-sisters, Marie Louise and Anne Marie born of the first marriage of their father to Henrietta Anne of England, she was known as Madame Royale, according to her status as the highest-ranking unmarried princess in France.

As a child, Élisabeth-Charlotte was described by her mother as 'so terribly wild' and 'rough as a boy'.[2] To her father's displeasure, she inherited her mother's frank opinions.

Her mother wanted her to marry with the same level of prestige as that of her sisters. When her cousin's wife, the Dauphine suggested she should marry the Dauphine's younger brother Joseph Clemens of Bavaria, Élisabeth Charlotte said, "I am not made, madame, for a younger son."[3] 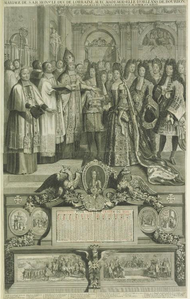 As her mother despised the king's illegitimate children, the chances of such an alliance were remote; however, in 1692, to the 'horror' of the Duchess of Orléans, such a mismatch occurred when the Duke of Chartres married, Françoise Marie de Bourbon, the youngest legitimised daughter of Louis XIV and Madame de Montespan.

Élisabeth's mother initially wanted her daughter to marry King William III of England, who was the widower of Queen Mary II of England, but, due to religious differences, William being a Protestant, the marriage did not materialise.

Other candidates considered were Holy Roman Emperor Joseph I;[4] Joseph was highly regarded, and, had the marriage taken place, the union would have been a way of reconciling the Bourbons and their traditional rivals, the Habsburgs. Even her widowed first cousin Monseigneur, the Dauphin of France, was considered, as were his son, Louis de France, and another cousin, the legitimised Louis-Auguste de Bourbon, Duke of Maine, eldest son of Louis XIV and Madame de Montespan. The latter, much to the relief of Madame did not occur as the Duke of Maine married Mademoiselle de Charolais in May 1692.

Élisabeth Charlotte was finally married on 13 October 1698 at the Palace of Fontainebleau to Leopold, Duke of Lorraine,[5] son of Charles V, Duke of Lorraine, and of the Archduchess Eleonora Maria Josefa of Austria.

The marriage was the result of the Treaty of Ryswick, one of its conditions being that the Duchy of Lorraine, which had been for many years in the possession of France, be restored to Leopold Joseph, a son of Charles V, Duke of Lorraine. Thus, Élisabeth Charlotte was but an instrument to cement the peace treaty. Her mother later said that her daughter "was a victim of war".

The marriage was seen as a brilliant match by the House of Lorraine but was regarded by some as a rank not deserved for a petite-fille de France. Despite this, the House of Lorraine received a dowry of 900,000 Livres. So many honors excited the jealousy of the other members of the royal family, and, taking the pretext of the death of a child of the Duke of Maine,[6] certain princesses claimed to attend the marriage ceremonies by proxy in dress of mourning.

After Élisabeth Charlotte's marriage, her niece Louise Adélaïde d'Orléans, who was born on 13 August 1698, took on the style of Mademoiselle de Chartres.

To everyone surprise, what had been expected to be an unhappy union turned out to be a marriage of love and happiness. With the birth of her children, Élisabeth Charlotte showed great maternal instinct and a naturally caring character.

The marriage produced thirteen children, of which five survived into adulthood. Three of them died within a week in May 1711 due to a smallpox outbreak at the Château de Lunéville, the country seat of the dukes of Lorraine.

After ten years, however, her husband turned his attentions to another, Anne-Marguerite de Lignéville, princesse de Beauvau-Craon. Embarrassed, Élisabeth Charlotte, on her mother's advice, remained silent and continued to live in the Château de Lunéville with her husband and his mistress. After her husband's liaison ended, the couple had five more children, one of whom would become the father of Queen Marie Antoinette.

In June 1701, her father died after having a heated argument with Louis XIV at Versailles[7] about the Duke of Chartres. Her brother thus became the new Duke of Orléans and head of the House of Orléans. Her mother was left at the mercy of Louis XIV who forbade her from visiting foreign soil[citation needed]. As a result, Élisabeth Charlotte was only able to see her mother when she went to Versailles. Despite this, Élisabeth Charlotte and her mother still saw each other and kept in contact through letters. Their correspondence was tragically destroyed in a fire at the Château de Lunéville in 1719.

On the death of Louis XIV in 1715, her elder brother, became the Regent of France for the five-year-old King Louis XV. In 1718, during a brief visit to the French court in Paris, her niece, the Dowager Duchess of Berry, gave a splendid reception in her honour at the Palais du Luxembourg which included 132 hors-d'œuvres, 32 soups, 60 entrées, 130 hot entremets, 60 cold entremets, 72 plats ronds, 82 pigeons, 370 partridges and pheasants and 126 sweetbreads. The dessert consisted of 100 baskets of fresh fruit, 94 baskets of dried fruit, 50 dishes of fruits glacés and 106 compotes. The event was considered one of the most lavish of the season.[8]

Upon leaving France, her husband received the style of Royal Highness, given to foreign princes, as, at the Court of France, the House of Lorraine was deemed as being a Foreign House.

Louis XV was crowned King of France at the Cathedral of Reims, on 25 October 1722. The occasion was the only time Élisabeth Charlotte's youngest child Anne Charlotte would see her grandmother who died a few weeks later on 8 December; Élisabeth Charlotte's brother died a year after the death of their mother, on 2 December 1723.

Unable to prevent her son from giving up the duchy of Lorraine to Stanisław Leszczyński when he married the Habsburg heiress, Maria Theresa of Austria, Élisabeth Charlotte moved into the Château d'Haroué in nearby Commercy, which was turned into a sovereign principality for her to enjoy during her dowager years. 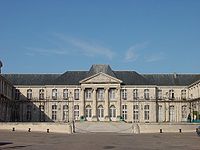 The Château de Commercy where she died in 1744

In 1737, her daughter, Élisabeth Thérèse married Charles Emmanuel III of Sardinia. Elisabetta Teresa, as she was known in Italy, died in childbirth in 1741 after giving birth to Élisabeth Charlotte's grandson, Benedetto, Duke of Chablais.

On 7 January 1744, her youngest son, Charles Alexander of Lorraine made a "marriage of love" with Archduchess Maria Anna of Austria, who died in childbirth on 16 December 1744.

Élisabeth Charlotte died of a stroke, on 23 December 1744, one week after her daughter-in-law and grandchild, at the age of sixty-eight. She was the last of her siblings to die and had outlived ten of her thirteen children. Nine months after her death, her son Francis Stephen became Holy Roman Emperor.

She was buried in the funerary chapel of the Dukes of Lorraine in the Saint-François-des-Cordeliers church in Nancy.

Élisabeth Charlotte authorised the construction of a hospital in the town of Bruyères.

In 1730, she offered to the church of Mattaincourt the wooden gilded shrine for the relics of Pierre Fourier, the former parish priest who had been beatified on 29 January 1730. The modern basilique Saint-Pierre-Fournier was built in 1853 on the site of the former church.