From Infogalactic: the planetary knowledge core
Jump to: navigation, search
For the Amsterdam Island in the Svalbard archipelago, see Amsterdamøya. 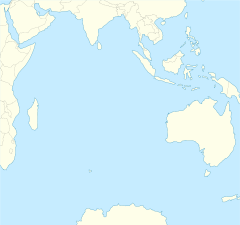 Amsterdam
Location of Île Amsterdam in the Indian Ocean

Île Amsterdam (French pronunciation: ​[ilamstɛʁˈdam], also known as Amsterdam Island, New Amsterdam, or Nouvelle Amsterdam, is an island named after the ship Nieuw Amsterdam, in turn named after the Dutch settlement of New Amsterdam that later became New York City in the United States. It lies in the southern Indian Ocean. It is part of the French Southern and Antarctic Lands and, together with neighbouring Île Saint-Paul 85 km (53 mi) to the south, forms one of the five districts of the territory. The Martin-de-Viviès research station, first called Camp Heurtin and then La Roche Godon, is the only settlement on the island and is home to about 30 non-permanent inhabitants involved in biological, meteorological and geomagnetic studies.

The island was discovered by the Basque Spanish explorer Juan Sebastián Elcano on 18 March 1522, in the course of his voyage of global circumnavigation. However, he did not name the island. Having found the island unnamed, Dutch captain Anthonie van Diemen named it Nieuw Amsterdam after his ship on 17 June 1633.[1] The first recorded landing was made in December 1696 by Dutchman Willem de Vlamingh.[2]

French Captain Pierre François Péron claims he was marooned from 1792 to 1795 on the island. Peron's Memoires, in which he describes his experiences, were published in a limited edition, which is an expensive collectors' item.[3][4][5] There was confusion in the early days between Amsterdam and Saint Paul Islands.

On 11 October 1833 the British barque Lady Munro was wrecked at the island. Of the 97 persons aboard, 21 survivors were picked up two weeks later by a US sealing schooner, General Jackson.[6]

In January 1871 an attempt to settle the island was made by a party led by Heurtin, a French resident of Réunion Island. After seven months there, their attempts to raise cattle and grow crops were unfruitful and they returned to Réunion, abandoning the cattle on the island.[7]

The islands of Île Amsterdam and Île Saint-Paul were first claimed by Martin Dupeyrat for France in 1843. However, the governor of Réunion refused to ratify the act of possession and France took formal control only in October 1892.[1]

The islands were attached to Madagascar in 1924 and became a French colony. The first French base on Amsterdam was established in 1949, and was originally called Camp Heurtin. The Global Atmosphere Watch still maintains a presence on Amsterdam.

Amsterdam island, along with Saint Paul Island, is considered by some Mauritian parties as a national territory. The question of Mauritian sovereignty over the two islands was raised in 2007 by the leader of the opposition, Paul Raymond Berenger. This new claim could be raised in discussions with France, along with a claim to Tromelin Island which has been officially maintained for a long time.[citation needed].

In the past there were frequent amateur radio operations from Amsterdam Island between 1987 and 1998. There was even a resident radio amateur operator in the 1950s using callsign FB8ZZ.[8]

The volcanic island is a potentially active volcano which last erupted in 1792. It has an area of 55 km2 (21 sq mi), measuring about 10 km (6.2 mi) on its longest side, and reaches as high as 867 m (2,844 ft) at the Mont de la Dives. The high central area of the island, at an elevation of over 500 metres (1,600 ft), containing its peaks and caldera, is known as the Plateau des Tourbières (in English the Plateau of Bogs). The cliffs that characterise the western coastline of the island, rising to over 700 metres (2,300 ft), are known as the Falaises d'Entrecasteaux after 18th-century French navigator Bruni d'Entrecasteaux.[10] 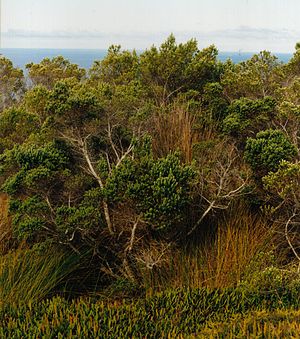 Phylica arborea trees occur on Amsterdam which, though the trees are also found on Tristan da Cunha and Gough Island, is the only place where they formed a low forest. It was called the Grand Bois ("Great Forest") which covered the lowlands of the island until forest fires set by sealers cleared much of it in 1825. Only eight fragments remain.

The island is home to the endemic Amsterdam albatross, which breeds only on the Plateau des Tourbières. Other rare species are the great skua, Antarctic tern and western rockhopper penguin. The Amsterdam duck is now extinct, as are the local breeding populations of several petrels.[13] The common waxbill has been introduced.[14] Both the Plateau des Tourbières and Falaises d'Entrcasteaux have been identified as Important Bird Areas by BirdLife International, the latter for its large breeding colony of Indian yellow-nosed albatrosses.[10]

There are no native land mammals. Subantarctic fur seals and southern elephant seals breed on the island. Introduced mammals include the house mouse and brown rat. Feral cats are present.[14]

A distinct breed of wild cattle, Amsterdam Island cattle, also inhabited the island from 1871 to 2010. They originated from the introduction of five animals by Heurtin during his brief attempt at settlement of the island in 1871,[14] and by 1988 had increased to an estimated 2,000. Following recognition that the cattle were damaging the island ecosystems, a fence was built restricting them to the northern part of the island.[13] In 2007 it was decided to eradicate the population of cattle entirely, resulting in the slaughter of the cattle between 2008 and 2010.[15]