Óscar Freire Gómez (born 15 February 1976) is a former Spanish professional road bicycle racer. He was one of the top sprinters in road bicycle racing, having won the world championship three times, equalling Alfredo Binda, Rik Van Steenbergen and Eddy Merckx. In the later years of his career, he has been more of a classics rider. He has won the cycling monument Milan–San Remo three times, four stages in the Tour de France and seven stages of the Vuelta a España, throughout a successful career.

Despite his diminutive stature, Freire was a good sprinter. He had a training philosophy where he rode shorter distances than most pro cyclists, sometimes covering only about half the distance his colleagues would.[1]

Born in Torrelavega, Cantabria, Freire became professional in 1998 with Vitalicio Seguros. He won one race that year, a stage of the Vuelta a Castilla y León. He came 11th in Paris–Tours. In 1999, Freire won little until the world championship in October. He went to Verona to make up numbers in the Spanish team. He spent his prize on an elevator for his grandmother's apartment.

Freire joined Mapei in 2000. It had been ranked best team since 1994. That year he won 11 races including two stages in the Vuelta a España. He also came third place in the world championship. In 2001 he won two races and took the points competition in the Vuelta a Burgos, before becoming world champion for the second time. In 2002 he won a stage in the Tour de France.

In 2003, Freire moved to Rabobank, where in his first season he won six races. In 2004 he won Milan–San Remo, Trofeo Luis Puig, a stage and second place overall in Tirreno–Adriatico, a stage in the Vuelta a España and for the third time, and the second time in Verona, the world championship. He started 2005 winning three stages, the points classification and the yellow jersey at Tirreno–Adriatico, as well as the Brabantse Pijl, Trofeo Alcudia and Trofeo Mallorca, all before the end of March. His season was then cut short by a saddle sore.

In 2006, Freire won his second consecutive Brabantse Pijl. His stage 3 win at Tirreno–Adriatico allowed him to lead for two days. At the Tour de Suisse, he survived an early break of four riders to win alone on stage 7. Freire won the fifth and ninth stages in the 2006 Tour de France and was contesting the points classification when he retired due to illness. During stage twelve, he was in a breakaway with three others. Freire’s career has been blighted with injury and lay-offs. He had back problems, saddle sores and neck problems. When Yaroslav Popovych, riding for the Discovery Channel Pro Cycling Team, rode away for victory, rumours spread that Freire had been ordered by Rabobank not to ride for the victory, to secure help from the Discovery Team in the mountains. Although rumours were denied by both teams, Freire was upset after the stage. Freire continued his successful year by winning the Vattenfall Cyclassics ahead of German favourite Erik Zabel. Freire had half of Rabobank’s victories in 2006. His season was cut short by neck and spinal injuries, forcing him to miss the Vuelta a España and world championship. Freire re-signed for Rabobank in late 2006 until the end of 2008, rejecting Saunier Duval-Prodir. 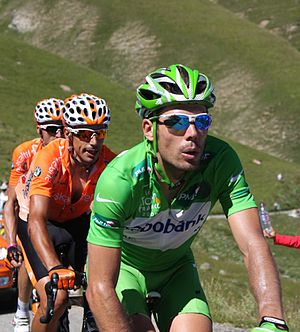 In the 2007 Tour de France, he did not win a stage, partly because Rabobank was defending Michael Rasmussen's lead for a large part of the race. But he won three stages in the Vuelta a España. In the 2008 Tour, Freire wore the green jersey from stage 8. He won stage 14 and the points classification. In the 2009 Tour he and Julian Dean were shot by an air rifle during the 13th stage from Vittel to Colmar. He was shot in the thigh and finished the stage 117th.[2]

In March 2010, Freire won the 2010 Milan–San Remo in front of Tom Boonen and Alessandro Petacchi.[3] On 10 October 2010 Freire became the first Spaniard to win Paris–Tours and in doing so became the new holder of the Ruban Jaune for setting the fastest average speed in a classic race, he covered the 233 km at an average of 47.73 km per hour.[4]

Shortly before the 2011 UCI Road World Championships it was announced that Óscar Freire would retire at the end of the season if he did not win the World Championship road race. Freire ended negotiations to continue his contract with his team before the race, and noted health issues include worsening respiratory problems, having had sinus and nasal surgery in the last two years. He was unable to race the 2011 Tour de France and was forced to abandon the 2011 Vuelta a España.[5]

Initially, Freire planned to finish his career by 2012, but at the end of season 2011 he suddenly changed his mind. While his home Rabobank team, confused by the situation and Oscar's indecision, failed to provide him an extension for another year, Freire had to start talks with other teams.[6] Omega Pharma-Quick Step, Lotto-Belisol and Geox-TMC expressed their interest to secure his service for season 2012, but Freire chose Team Katusha. He was reported to have been swayed by Team Katusha because the Russian team had a good number of other Spanish riders on its roster along with its well-organised structure and guaranteed entry into WorldTour races.[6]

By 2012 Freire fully recovered from his previous health problems and managed to show very good results at the first opening races. In January he won stage 3 of Australian Tour Down Under, and then completed his success at stage 3 of Vuelta a Andalucia. At the spring classics Oscar Freire finished 7th at Milan–San Remo, while having taken two second places: one at E3 Harelbeke where he was edged on the line by Tom Boonen (Omega Pharma–Quick-Step)[7] and the other at the Brabantse Pijl, where he dominated the sprint of the chasers after lone escapee Thomas Voeckler of Team Europcar had crossed the line.[8] He then went on to finish 4th in the Amstel Gold Race. He escaped from the lead group with 5 kilometres (3.1 mi) to cover and held an advantage of 18 seconds at the bottom of the final climb, the Cauberg. He was passed in the final meters, but managed to held on for fourth.[9]

In an interview to the French magazine Velochrono, Freire claimed to take part in the Olympics in London along with the Tour de France and UCI Road World Championships.[10] Freire later admitted that he was contemplating retirement if he didn't win the rainbow jersey, and that he would keep riding for another year or two if he wins the 2012 UCI Championships.[11] He retired from professional cycling at the end of 2012, reportedly refusing a deal from Euskaltel–Euskadi, who would have liked him to race for the 2013 season and then take a post in management.[12] The Basque team was suspected of trying to hoard in Freire's crucial UCI World Tour points, which would help them get a World Tour license for 2013, but the team management denied it.[13]