From Infogalactic: the planetary knowledge core
Jump to: navigation, search
For the Finnish island, see Åland. For other uses, see Oland (disambiguation).

Coat of arms of Öland 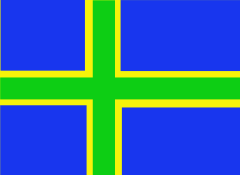 One unofficial flag of Öland 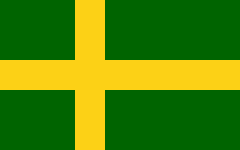 Another unofficial flag of Öland

listen)) is the second largest Swedish island and the smallest of the traditional provinces of Sweden. Öland has an area of 1,342 km² and is located in the Baltic Sea just off the coast of Småland. The island has 25,000 inhabitants.[1] It is separated from the mainland by the Kalmar Strait and connected to it by the 6-km Öland Bridge, which opened on 30 September in 1972.

The traditional provinces of Sweden no longer serve administrative or political purposes but still exist as historical and cultural entities. Öland is part of the administrative county of Kalmar County (Kalmar län) and consists of the two municipalities of Borgholm Municipality and Mörbylånga Municipality. There was an Öland County in the short period between 1819 and 1826; otherwise, the island has been part of Kalmar County since 1634.

Öland was granted provincial arms in 1560, but it would not be until the 1940s that the province was assigned its proper ones. The arms granted to Öland had been mixed up with the arms granted to Åland and this was not discovered until the 20th century. While Öland changed its coat of arms, Åland, which was now a Finnish (autonomous) province, kept its established but originally unintended coat of arms. The deer is meant to symbolise the status of Öland as a royal game park and the arms are topped by a ducal crown. Blazon: "Azure a Deer Or attired, hoofed and gorged Gules." 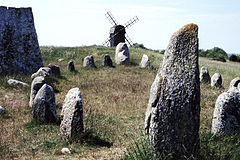 Archaeological evidence indicates the island of Öland was settled about 8000 BC, with excavations dating from the Paleolithic era showing the presence of hunter-gatherers.[3] In the early Stone Age, settlers from the mainland migrated across the ice bridge that connected the island across the Kalmar Strait.

Evidence of habitation of Öland (known in Latin as Oelandia) occurred at least as early as 6000 BC, when there were stone age settlements at Alby and other locations on the island. Burial grounds from the Iron Age through the Viking Age are clearly visible at Gettlinge, Hulterstad and other places on the perimeter ridge including stone ships.

There are nineteen Iron Age ringforts identified on the island, only one of which, Eketorp, has been completely excavated, yielding over 24,000 artifacts. Around 900 AD, Wulfstan of Hedeby called the island "Eowland", the land of the Eowans:

Then, after the land of the Burgundians, we had on our left the lands that have been called from the earliest times Blekingey, and Meore, and Eowland, and Gotland, all which territory is subject to the Sweons; and Weonodland was all the way on our right, as far as Weissel-mouth.[4]

Scholars such as Schütte[5] and Kendrick[6] have pointed out that there was probably an even earlier mention of the people of Öland in 98 AD, by Tacitus, who called them the "Aviones":

After the Langobardi come the Reudigni, Auiones, Angli, Varni, Eudoses, Suarines and Nuithones all well guarded by rivers and forests. There is nothing remarkable about any of these tribes unless the common worship of Nerthus, that is Earth Mother, is considered. They believed she was interested in men's affairs and walked among them. On an island in the ocean sea there is a sacred grove where a holy wagon covered by a drape awaits.[7]

In Swedish history, the island long served as a royal game park; Ottenby and Halltorps were in particular selected by the Swedish Crown in the Middle Ages as royal game reserves. 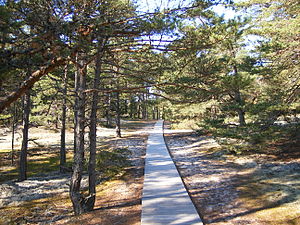 Öland is the second largest of the islands of Sweden and was historically divided into one chartered city and five hundreds. 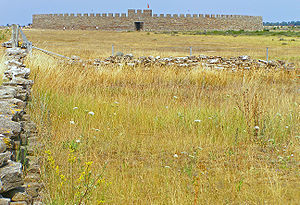 Stora Alvaret on southeast of Öland with Eketorp Fortress in background

The dominant environmental feature of the island is the Stora Alvaret, a limestone pavement which is the habitat of numerous rare and endangered species. The first known scientific study of the biota of the Stora Alvaret occurred in the year 1741 with the visit of Linnaeus.[9][10]

The underlying bedrock layer is mainly Cambrian sandstone and alum chert, and Ordovician limestone that dates from an approximate range of 540 to 450 million years ago. The Cambrian trilobite Eccaparadoxides oelandicus is named after Öland[11]

Öland is served by a perimeter highway, Route 136.

In 2011 the Gripen Gas company filed a request for test drilling on Öland for natural gas. The request was approved by Bergsstaten, the governmental agency responsible for handling geological issues regarding prospecting. The approval has been met with critique on the municipal and county administrative levels, citing that the many cracks in the limestone bedrock could cause the groundwater to become contaminated by the gas prospecting.[12]

The Borgholm Castle was built between 1669 and 1681 for Queen Hedvig Eleonora, and designed by Nicodemus Tessin the Elder. In its vicinity sits the Solliden Palace, summer home to the royal family.

The limestone pavement habitat of southern Öland, known as Stora Alvaret. has been entered as a site of the UNESCO World Heritage program.[13] Features of this are the many rare species found; prehistory sites such as Gettlinge and Eketorp; numerous old wooden windmills left standing, some of which date to the 17th century; and the special geological alvar landscape.

For a decade, Öland has been organizing an annual harvest festival called Skördefesten that takes place every October. In terms of this event, the island's farmers gather with farmers from the rest of the country and sell their crops and let those that are interested take part in everyday life on their farms, among other activities. There are also many art exhibitions for display during Skördefesten especially during the art night Konstnatten.

Skördefest is an annual harvest festival on Öland, held every September, which attracts thousands of visitors. Pumpkins are placed upon the top of bales of hay, a signal to buyers that fall harvest goods are available for sale at the location. In Borgholm, a pumpagubbe (pumpkin man), a large scarecrow like figure, built entirely of gourds, is erected at town center. The pumpagubbe celebrates the bounty of the Fall Harvest.

Football in the province is administered by Smålands Fotbollförbund.

Each year the King's Rally, a vintage motorcade, takes place in Öland.[14]