Östergötland County has a population of 429 852 (March 31, 2011) and the capital and biggest city is Linköping. Linköping and neighbouring twin city Norrköping together form one of Sweden's metropolitan areas; The Linköping-Norrköping Corridor is therefore sometimes marketed as The Fourth Metropolitan Region of Sweden,[citation needed] the other three being Stockholm, Gothenburg and Malmö.

For History, Geography and Culture see: Östergötland Östergötland has virtually the same boundaries as the current administrative entity, the Östergötland County.

The main aim of the County Administrative Board is to fulfil the goals set in national politics by the Riksdag and the Government, to coordinate the interests of the county, to promote the development of the county, to establish regional goals and safeguard the due process of law in the handling of each case. The County Administrative Board is a Government Agency headed by a Governor. See List of Östergötland Governors. 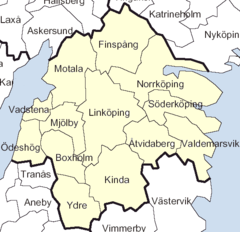 Östergötland County inherited its coat of arms from the province of Östergötland. When it is shown with a royal crown it represents the County Administrative Board.