The Übermensch (German for "Overman, Superman, Superhuman, Hyperman, Hyperhuman"; German pronunciation: [ˈˀyːbɐmɛnʃ]) is a concept in the philosophy of Friedrich Nietzsche. In his 1883 book Thus Spoke Zarathustra (German: Also sprach Zarathustra), Nietzsche has his character Zarathustra posit the Übermensch as a goal for humanity to set for itself. It is a work of philosophical allegory, with a structural similarity to the Gathas of Zoroaster/Zarathustra. 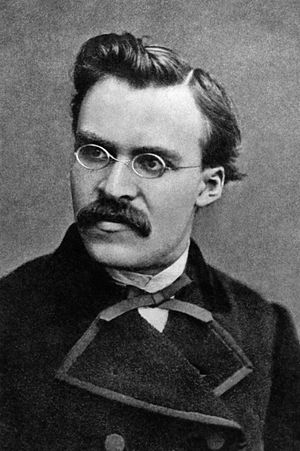 The first translation, published in 1896, of Thus Spoke Zarathustra into English was by Alexander Tille, who translated Übermensch as Beyond-Man. In the Thomas Common translation, published in 1909, however, Übermensch was rendered as "Superman". Common was anticipated in this by George Bernard Shaw, who had done the same in his 1903 stage play Man and Superman. Walter Kaufmann lambasted this translation in the 1950s for two reasons: first, its near or total failure to capture the nuance of the German word über (while the Latin prefix super- means above or beyond, the English use of the prefix or its use as an adjective has altered the meaning); and second, a rationale which Fredric Wertham railed against even more vehemently in Seduction of the Innocent, for promoting identification by children with the comic-book character Superman (whom Wertham described as "un-American and fascist"). The preference of Kaufmann and others is to translate Übermensch as "overman". Scholars continue to employ both terms, some simply opting to reproduce the German word.[1][2]

The German prefix über can have connotations of superiority, transcendence, excessiveness, or intensity, depending on the words to which it is attached.[3] Mensch refers to a member of the human species, rather than to a male specifically. The adjective übermenschlich means super-human, in the sense of beyond human strength or out of proportion to humanity.[4]

Nietzsche introduces the concept of the Übermensch in contrast to his understanding of the other-worldliness of Christianity: Zarathustra proclaims the Übermensch to be the meaning of the earth and admonishes his audience to ignore those who promise other-worldly hopes in order to draw them away from the earth.[5][6] The turn away from the earth is prompted, he says, by a dissatisfaction with life—a dissatisfaction that causes one to create another world in which those who made one unhappy in this life are tormented. The Übermensch is not driven into other worlds away from this one.

Zarathustra declares that the Christian escape from this world also required the invention of an eternal soul which would be separate from the body and survive the body's death. Part of other-worldliness, then, was the abnegation and mortification of the body, or asceticism. Zarathustra further links the Übermensch to the body and to interpreting the soul as simply an aspect of the body.

Death of God and the creation of new values

Zarathustra ties the Übermensch to the death of God. While this God was the ultimate expression of other-worldly values and the instincts that gave birth to those values, belief in that God nevertheless did give meaning to life for a time. 'God is dead' means that the idea of God can no longer provide values. With the sole source of values no longer capable of providing those values, there is a real chance of nihilism prevailing.

Zarathustra presents the Übermensch as the creator of new values. In this way, it appears as a solution to the problem of the death of God and nihilism. If the Übermensch acts to create new values within the moral vacuum of nihilism, there is nothing that this creative act would not justify. Alternatively, in the absence of this creation, there are no grounds upon which to criticize or justify any action, including the particular values created and the means by which they are promulgated.

In order to avoid a relapse into Platonic idealism or asceticism, the creation of these new values cannot be motivated by the same instincts that gave birth to those tables of values. Instead, they must be motivated by a love of this world and of life. Whereas Nietzsche diagnosed the Christian value system as a reaction against life and hence destructive in a sense, the new values which the Übermensch will be responsible for will be life-affirming and creative (see Nietzschean affirmation).

Zarathustra first announces the Übermensch as a goal humanity can set for itself. All human life would be given meaning by how it advanced a new generation of human beings. The aspiration of a woman would be to give birth to an Übermensch, for example; her relationships with men would be judged by this standard.[7]

Zarathustra contrasts the Übermensch with the last man of egalitarian modernity, an alternative goal which humanity might set for itself. The last man appears only in Thus Spoke Zarathustra, and is presented as a condition that would render the creation of the Übermensch impossible.

According to Rüdiger Safranski, some commentators associate the Übermensch with a program of eugenics.[8] This is most pronounced when considered in the aspect of a goal that humanity sets for itself. The reduction of all psychology to physiology implies, to some, that human beings can be bred for cultural traits. This interpretation of Nietzsche's doctrine focuses more on the future of humanity than on a single cataclysmic individual. There is no consensus regarding how this aspect of the Übermensch relates to the creation of new values.

For Rüdiger Safranski, the Übermensch represents a higher biological type reached through artificial selection and at the same time is also an ideal for anyone who is creative and strong enough to master the whole spectrum of human potential, good and "evil", to become an "artist-tyrant". In Ecce Homo, Nietzsche vehemently denied any idealistic, democratic or humanitarian interpretation of the Übermensch: "The word Übermensch [designates] a type of supreme achievement, as opposed to 'modern' men, 'good' men, Christians, and other nihilists ... When I whispered into the ears of some people that they were better off looking for a Cesare Borgia than a Parsifal, they did not believe their ears."[9] Safranski argues that the combination of ruthless warrior pride and artistic brilliance that defined the Italian Renaissance embodied the sense of the Übermensch for Nietzsche. According to Safranski, Nietzsche intended the ultra-aristocratic figure of the Übermensch to serve as a Machiavellian bogeyman of the modern Western middle class and its pseudo-Christian egalitarian value system.[10]

Relation to the eternal recurrence

The Übermensch shares a place of prominence in Thus Spoke Zarathustra with another of Nietzsche's key concepts: the eternal recurrence of the same. Several interpretations for this fact have been offered.

Laurence Lampert suggests that the eternal recurrence replaces the Übermensch as the object of serious aspiration.[11] This is in part due to the fact that even the Übermensch can appear like an other-worldly hope. The Übermensch lies in the future — no historical figures have ever been Übermenschen — and so still represents a sort of eschatological redemption in some future time.

Stanley Rosen, on the other hand, suggests that the doctrine of eternal return is an esoteric ruse meant to save the concept of the Übermensch from the charge of Idealism.[12] Rather than positing an as-yet unexperienced perfection, Nietzsche would be the prophet of something that has occurred a countless number of times in the past.

Others maintain that willing the eternal recurrence of the same is a necessary step if the Übermensch is to create new values, untainted by the spirit of gravity or asceticism. Values involve a rank-ordering of things, and so are inseparable from approval and disapproval; yet it was dissatisfaction that prompted men to seek refuge in other-worldliness and embrace other-worldly values. Therefore, it could seem that the Übermensch, in being devoted to any values at all, would necessarily fail to create values that did not share some bit of asceticism. Willing the eternal recurrence is presented as accepting the existence of the low while still recognizing it as the low, and thus as overcoming the spirit of gravity or asceticism.

Still others suggest that one must have the strength of the Übermensch in order to will the eternal recurrence of the same; that is, only the Übermensch will have the strength to fully accept all of his past life, including his failures and misdeeds, and to truly will their eternal return. This action nearly kills Zarathustra, for example, and most human beings cannot avoid other-worldliness because they really are sick, not because of any choice they made.

The term Übermensch was utilized frequently by Hitler and the Nazi regime to describe their idea of a biologically superior Aryan or Germanic master race;[13] a form of Nietzsche's Übermensch became a philosophical foundation for the National Socialist ideas. Their conception of the Übermensch, however, was racial in nature.[14][15] The Nazi notion of the master race also spawned the idea of "inferior humans" (Untermenschen) which could be dominated and enslaved; this term does not originate with Nietzsche. Nietzsche himself was critical of both antisemitism and German nationalism. In defiance of these doctrines, he claimed that he and Germany were great only because of "Polish blood in their veins",[16] and that he would be "having all anti-semites shot" as an answer to his stance on anti-semitism. Although the term has been associated with the Nazis, Nietzsche was dead long before Hitler's reign. It was Nietzsche's sister Elisabeth Förster-Nietzsche who actually first played a part in manipulating her brother's words to accommodate the worldview of herself and her husband, Bernhard Förster, a prominent German nationalist and antisemite.[17] In order to support his beliefs he set up the Deutscher Volksverein (German People's League) in 1881 with Max Liebermann von Sonnenberg.[18]

The thought of Nietzsche had an important influence in anarchist authors (see Anarchism and Friedrich Nietzsche). Spencer Sunshine writes that "There were many things that drew anarchists to Nietzsche: his hatred of the state; his disgust for the mindless social behavior of 'herds'; his anti-Christianity; his distrust of the effect of both the market and the State on cultural production; his desire for an 'overman' — that is, for a new human who was to be neither master nor slave; his praise of the ecstatic and creative self, with the artist as his prototype, who could say, 'Yes' to the self-creation of a new world on the basis of nothing; and his forwarding of the 'transvaluation of values' as source of change, as opposed to a Marxist conception of class struggle and the dialectic of a linear history."[19] The influential American anarchist Emma Goldman in her famous collection of essays Anarchism and Other Essays in the preface passionately defends both Nietzsche and Max Stirner from attacks within anarchism when she says "The most disheartening tendency common among readers is to tear out one sentence from a work, as a criterion of the writer's ideas or personality. Friedrich Nietzsche, for instance, is decried as a hater of the weak because he believed in the Übermensch. It does not occur to the shallow interpreters of that giant mind that this vision of the Übermensch also called for a state of society which will not give birth to a race of weaklings and slaves."[20]

Sunshine says that the "Spanish anarchists also mixed their class politics with Nietzschean inspiration." Murray Bookchin, in The Spanish Anarchists, describes prominent CNT–FAI member Salvador Seguí as "an admirer of Nietzschean individualism, of the superhombre to whom 'all is permitted'." Bookchin, in his 1973 introduction to Sam Dolgoff's The Anarchist Collectives, even describes the reconstruction of society by the workers as a Nietzschean project. Bookchin says that "workers must see themselves as human beings, not as class beings; as creative personalities, not as 'proletarians,' as self-affirming individuals, not as 'masses'. . .(the) economic component must be humanized precisely by bringing an 'affinity of friendship' to the work process, by diminishing the role of onerous work in the lives of producers, indeed by a total 'transvaluation of values' (to use Nietzsche's phrase) as it applies to production and consumption as well as social and personal life."[19]