From Infogalactic: the planetary knowledge core
Jump to: navigation, search
This article is about the Serbian and former Yugoslav Roma religious festival. For the former Yugoslav, Romani song, see Ederlezi (song).

Đurđevdan (Ђурђевдан, pronounced [ˈdʑuːrdʑeʋdaːn], "George's day" in Serbian, Gergyovden "George's day" in Bulgarian, Jurjevo "George's" in Croatian and Bosnian or Gjurgjuvden (Ѓурѓовден) in Macedonian, is a South-Slavic religious holiday, celebrated on April 23 by the Julian calendar (May 6 by Gregorian calendar), which is the feast of Saint George and a very important Slava.

Saint George is one of the most important Christian saints in Orthodox churches: the patron saint of Slav, Georgian and Circassian Christian warriors, Cossacks, Chetniks, and armies. This holiday is attached to the tradition of celebrating the beginning of spring. Christian synaxaria hold that St. George was a martyr who died for his faith. On icons, he is usually depicted as a man riding a horse and killing a dragon.

Jurjevo is mainly celebrated in the rural areas of Croatia, mostly Turopolje and Gornja Stubica whereas every Đurđevdan is celebrated all over the Serbian diaspora but mainly in Serbia, Kosovo, Montenegro, Bosnia Herzegovina and Macedonia. In Croatian St. George is called Sv. Juraj while in Serbian he's called Sveti Đorđe (Serbian Cyrillic: Свети Ђорђе), in Bulgarian Sveti Georgi (Cyrillic: Свети Георги) and in Macedonian Sv. Gjorgjija (Ѓорѓија).

In Croatia, the Catholic version of St.George's day, Jurjevo is celebrated on April 23 by the Gregorian calendar. The tradition is mostly celebrated in northern Croatia, in Zagreb County. According to tradition this day marks the beginning of spring. The use of bonfires is similar to Walpurgis Night. In Turopolje Jurjevo involves a slavic tradition where five most beautiful girls are picked to play as Dodola goddesses dressed in leaves and sing for the village every day till the end of the holiday.

Đurđevdan is also celebrated by the Gorani from the Gora region in southern Kosovo. The Gorani are a Slavic Muslim group, who converted from Orthodox Christianity to Islam during the 18th century but kept a few Serbian – Christian traditions, including Đurđevdan. The holiday has a center in and around the village of Globočica. It's also celebrated by members of the uncanonical Montenegrin Orthodox Church.

Đurđevdan (Romany: Ederlezi) is also a major holiday for Romani from former Yugoslavia, whether Orthodox or Muslim. The various Balkan spellings (Herdeljez, Erdelezi) are variants of the Turkish Hıdırellez. 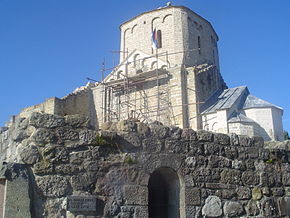 Đurđevi stupovi, Orthodox Church dedicated to Saint George, in the ancient city of Ras in Serbia. Built during the 12th-century by the Serbian King Stefan Nemanja

This holiday celebrates the return of springtime and is considered the most important. The traditions of the Roma Durđevdan are based on decorating the home with flowers and blooming twigs as a welcoming to spring. It also includes taking baths added with flowers and washing hands with water from church wells. Also the walls of the home could be washed with the water. On the day of the feast it is most common to grill a lamb for the feast dinner. The appearance of music is also very important during this holiday. Aside from dancing and singing, traditional Brass bands are popular.

"Ðurđevdan" is also the name of a popular song by band Bijelo dugme. The song is originally found on their studio album Ćiribiribela from 1988. It is a cover song (with different lyrics) for a popular traditional folk song of the Romani, "Ederlezi". Which was largely made famous by Goran Bregović.

In Bosnia, the major holidays of all religious groups were celebrated by all other religious groups as well, at least until religion-specific holidays became a marker of ethnic or nationalist self-assertion after the breakup of Yugoslavia. Roman Catholic Christmas, Orthodox Christmas, and the two Muslim Bajrams were widely recognized by people of all ethnic groups, as was Ðurđevdan even though it was properly an Orthodox holiday and therefore associated with Serbs. The holiday's widespread appeal is in evidence in Meša Selimović's novel Death and the Dervish, where the pious Muslim protagonist views it as a dangerous pagan throwback, but where it is clearly celebrated by all ethnic groups in the unnamed city of its setting (widely considered to be Sarajevo). The holiday does appear to have pan-slavic roots.