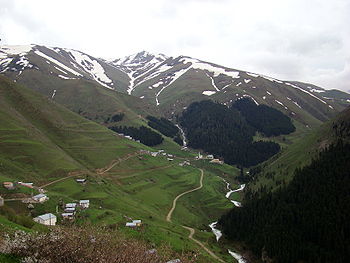 A variety of endemic-type flowers exist in Anzer plateau (aka Ballıköy plateau). This upland is located in the southeast of İkizdere district of Rize, one of the major cities in the Black Sea region of Turkey. The "Anzer honey", famous with its curative powers, is produced there.

İkizdere is a town and district of Rize Province in the Black Sea region of Turkey.

There are four ethnic group in the district: Greeks, Turks, Laz and Hemshin. The non-Turkic natives converted into Islam during the Ottoman peiod, and during the population exchange between Greece and Turkey, the natives stayed in the area. There is a minority of Greek-speakers, mostly old people. The local Turkish dialect is full of Pontic Greek words. The localities

This is hilly countryside inland from the Black Sea, forest-covered steep mountainside separated by narrow valleys, with areas of high pasture. The İkizdere is formed from streams running out of the Rize Mountains and continues down to the Black Sea, it is dammed for hydro-electric power and for irrigation. There is snow on the high peaks and lots of glacial formation. The climate is typical of the Black Sea region i.e. it rains all the time. There is broad-leaf forest at lower elevations and pine higher up.

İkizdere is an agricultural district, growing tea on the hillsides and potatoes in the valley, and now some kiwi fruit are being planted also. Cattle and sheep are grazed on the hillsides, going up to the high pastures (yayla) in summer. Beekeeping is another important source of income, particularly in the village of Anzer. And this very attractive countryside is now attracting tourists, on trekking holidays. However on the whole İkizdere is not a wealthy region and the younger generations migrate to Turkey's larger cities in search of jobs.

The town of İkizdere is on the river bank, 56 km (35 mi) from the city of Rize on the road to Erzurum.

See Rize Province for a history of this area, once part of the Byzantine Empire and later the Empire of Trebizond, during which periods there was a monastery there in İkizdere. The area was absorbed into the Ottoman Empire by Mehmet II in 1461.

İkizdere was occupied by Russia for two years during the First World War.

There are also a number of interesting wooden houses from the Ottoman period, and many areas of high meadow for walking and trekking, including: