The İstiklâl Marşı (Turkish pronunciation: [istiˈklaːl marˈʃɯ]; English: Independence March) is the national anthem of the Republic of Turkey, officially adopted on 12 March 1921 —two-and-a-half years before the 29 October 1923 establishment of the nation— both as a motivational musical saga for the troops fighting in the Turkish War of Independence, and as an aspirational anthem for a Republic that was yet to be established.

Penned by Mehmet Âkif Ersoy, and ultimately composed by Osman Zeki Üngör, the theme is one of affection for the Turkish homeland, freedom, and faith, as well as praise for the virtues of hope, devotion, and sacrifice in the pursuit of liberty, all explored through visual, tactile, and kinesthetic imagery as these concepts relate to the flag, the human spirit, and the soil of the homeland. The original manuscript by Ersoy carries the dedication Kahraman Ordumuza – "To our Heroic Army", in reference to the people's army that ultimately won the Turkish War of Independence, with lyrics that reflect on the sacrifices of the soldiers during the war.

The anthem is regularly heard during state and military events, as well as during national festivals, bayrams, sporting events, and school ceremonies. Visual depictions can also be found adorning state or public displays, such as in the form of a scroll displaying the first two quatrains of the anthem on the reverse of the Turkish 100 lira banknotes of 1983–1989.[1]

Of the ten-stanza anthem, only the first two quatrains are sung.

A framed version of the national anthem typically occupies the wall above the blackboard in the classrooms of Turkish schools, accompanied by a Turkish flag, a photograph of the country's founding father Atatürk, and a copy of Atatürk's famous inspirational speech to the nation's youth from the concluding remarks to his 20 October 1927 address to the Parliament.[citation needed]

The composition has also come to be adopted as the National Anthem of the Turkish Republic of Northern Cyprus — an internationally-unrecognized state on the island of Cyprus that was declared by the Turkish Cypriot community in 1983 after the events of 1974.[2] 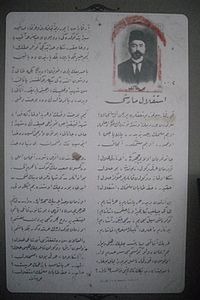 The present-day anthem is a collective effort by several prominent poets, musicians, and composers that took form over several years due to the relatively tumultuous nature of the period in which it was crafted.

Even before the full official dissolution of the Ottoman Empire, a nationwide competition was organized in 1921 by the Turkish National Movement — an independent and self-organized militia force led by Mustafa Kemal Atatürk waging a lengthy campaign for independence against both invading foreign powers and the Ottoman Court itself, due to the latter being seen as treasonous and complicit in the partitioning of the Turkish homeland in the aftermath of the 1920 Treaty of Sèvres. The goal of the competition was to select an original composition suitable for a National March, intended to both motivate the militia forces fighting for independence across the country, and to provide inspiration and pride for a new homeland that would be established once victory was achieved.

A total of 724 poems were submitted. Mehmet Akif Ersoy, a well-known poet of the period, initially refused to participate due to a monetary prize being offered in the competition, but was subsequently contacted and convinced by the National Parliament to submit a poem and disregard the reward. The resulting ten-stanza-long poem written by Ersoy was recited to the National Assembly by representative Hamdullah Suphi, on March 1, 1921,[3] where it was unanimously adopted by the deputies following evaluation by a parliamentary committee. The prize of the competition was later bestowed on a society of veterans.

Shortly thereafter, twenty-four composers participated in another competition arranged for the selection of a musical composition that would best suit the elected anthem. The Committee, which was only able to convene in 1924 due to the 1919-1923 Turkish War of Independence, adopted the music composed by Ali Rıfat Çağatay.

This early composition by Çağatay lasted only six years. In 1930, a new composition by Osman Zeki Üngör, virtuoso composer and the first conductor of the Presidential Symphony Orchestra of the Republic of Turkey, was adopted as a permanent musical arrangement by Parliament.[3] Shortly thereafter, in 1932, Turkish composer, conductor, and musicologist of Armenian descent Edgar Manas (Armenian: Էտկար Մանաս) was commissioned by the Turkish Republic to harmonize and orchestrate the melody created by Üngör,[4][5][6] and the final and official version of the anthem took form.

The lyrics of the Turkish National Anthem consist of a long poem with 41 lines of verse. Only the first 8 lines (shown in bold) are performed in official ceremonies.

1 A white crescent and star superimposed on a crimson background comprise the Turkish flag - the poet here is referring to the crimson flag's star, and is declaring that it belongs to the hearts of those comprising the Turkish nation, who cherish it deeply, and refuse to be deprived of it (and hence, their freedom and liberty) by anyone.

2 A white crescent and star superimposed on a crimson background comprise the Turkish flag- the poet is invoking the curvilinear image of the crescent and comparing it to the furrowed eyebrows of a frowning face, and anthropomorphises the flag by suggesting that its "sulky face" is an outward expression of its resentment of the invading foreign armies. The poet elaborates upon this imagery by suggesting that the flag is not only being surly, but also coy. He depicts the flag (and the spirit of freedom which it embodies, under threat from invading nations against whom victory initially seems impossibly difficult to achieve, hence "coy") as a demure maiden with a sulky face (symbolically, the resentment of the invasion) who is playing hard-to-get. That is, the "coy" flag is being "playful" about letting Turkish troops achieve ultimate victory and thus, freedom.

3 Although the word used here, "ırk", means "race" in contemporary Turkish, it had different associations in Ottoman Turkish. In Ottoman Turkish, it also carries the connotations of 'generation,' 'offspring', and 'family linage; in short, 'kin'.'[7] Also note that the poet was of Albanian and Uzbek origin.[8] Thus, the correct translation would be "Smile upon my heroic kinfolk!", rather than "Smile upon my heroic race".

4 The poet elaborates upon his earlier anthropomorphization of the flag by suggesting that it contain its rage and resentment, and resume its noble and honorable self in order to validate the efforts of Turkish patriots in protecting it.

6 The original word used ("Enginler"), which can be translated as "the Infinites" or " the Great Expanses", is a Turkish poetical word (with no direct English translation) that refers to anything perceived by Man as a vast, boundless expanse: the heavens, the oceans, the horizon, the Universe, etc.

7 The verse here alludes to the well-funded military might of the invading foreign powers, i.e. "the West", and compares it to the exhausted bodies and limited resources of the rag-tag team of patriots comprising the Turkish resistance army. The poet asserts that the men and women who are fighting to defend the nation from invading powers must not be daunted by these countries' superior firepower and technology, because the strength of spirit that comes from heartfelt optimism and faith are just as strong as any "walls of steel" the enemy might have around them.

8 There is a difficult-to-translate wordplay here on the word "ulusun", which can be broken down into a root, "ulu", and a suffix, "-sun". The verb form of the root "ulu", means "to howl, to cry out, to bellow", while the adjective form means "grand, sublime, noble". The suffix -sun serves to modify the adjective-form of this root to give it a second-person singular connotation, while it modifies the verb-form to give it a third person connotation. Thus, the phrase "ulu-sun" may be interpreted in two ways: "let it howl/cry out" (let your mighty voice echo across the land!) or "you are noble"

9 The term "civilization" here is used as a synonym for "the West", and the imagery of the "single-fanged beast" is in reference to the severe battering delivered to foreign armies by Turkish forces, the patriotic fighters of which have knocked out all but one of the ferocious monster's (the invaders') teeth - hence the expression, "single-fanged". In essence, the poet is building upon his earlier message to the Nation about showing patience and endurance against seemingly-impossible odds. He states that the vast superiority of the West in terms of technology, equipment and manpower to the war-stricken, undermanned, and underfed Turkish forces (that were hastily assembled by patriotic civilians and ex-military officials following World War I) can not only be matched, but actually overcome and even defeated for good by the unassailable spirit of the Turkish people.
Thus, the poet is calling out to the Nation, saying, "While 'the lands of the West may be armed with walls of steel', i.e., while these European armies may have seemingly impenetrable/unbeatable modern technology and weaponry, do not be fooled/discouraged by their apparent superiority. Look at what we have accomplished so far with virtually non-existent arms and supplies! We are horribly fatigued, and at a disadvantage in every conceivable way, yet we still are able to succeed in our battle for liberty! This seemingly undefeatable 'monster' has had almost every one of its teeth knocked out (hence, 'single-fanged') by our victorious campaign! Our motivation, faith, and internal drive is what has and will continue to carry us through, and that is something that our enemies cannot remotely match. All we need for ultimate victory is the ability to recognize our true 'innate strengths': a 'fiery faith' and the 'mighty chest (i.e. heart) of a believer'".

10 In Turkish, shroud-less is a metaphor used for martyrs, i.e. those who have sacrificed their lives for their country and their faith. In Islamic tradition, the dead have to be ceremoniously washed and dressed in linen shrouds before burial in order to have a safe passage to Heaven. Due to the chaotic nature of war, this practice is often unavailable to the battle-fallen, who may lie "shroudless" and exposed on the battle-field.

11 Prostration is the act of laying one's forehead on the ground as part of Muslim sacred ritual (see Namaz, As-Sajda or salat).

12 The image being painted here is that of a battle-fallen and pain-stricken patriot, who becomes ecstatic following the victorious end of the War of Independence. Despite not having a headstone at his final resting place, this is a man whose mind, body and soul have at long last found peace, and may thus finally ascend and reach the heavens, knowing that his homeland is safe and sound once and for all, and that all his suffering was worth it in the end.