From Infogalactic: the planetary knowledge core
Jump to: navigation, search
For other uses, see Žilina (disambiguation).

Žilina (Slovak pronunciation: [ˈʒilina]; German: Sillein, [ziˈlaɪ̯n] or [ˈzɪlaɪ̯n]; Hungarian: Zsolna; Polish: Żylina, names in other languages) is a city in north-western Slovakia, around 200 kilometres (120 mi) from the capital Bratislava, close to both the Czech and Polish borders. It is the fourth largest city of Slovakia with a population of approximately 85,000, an important industrial center, the largest city on the Váh river, and the seat of a kraj (Žilina Region) and of an okres (Žilina District). It belongs to Upper Váh region of tourism.

The area around today's Žilina was inhabited in the late Stone Age (about 20,000 BC). In the 5th century Slavs started to move into the area. However, the first written reference to Žilina was in 1208 as terra de Selinan. From the second half of the 10th century until 1918, it was part of the Kingdom of Hungary.

In the middle of the 13th century terra Sylna was the property of the Cseszneky de Milvány family.[1] The city started to develop around year 1300, and according to records in 1312 it was already a town. In 1321, King Charles I made Žilina a free royal town. On 7 May 1381 King Louis I issued Privilegium pro Slavis which made the Slav inhabitants equal to the Germans by allocating half of the seats at the city council to Slavs.[2] The town was burned in 1431 by the Hussites.

During the 17th century, Žilina gained position as a center of manufacturing, trade and education and during the baroque age many monasteries and churches were built as well as the Budatín Castle. In the Revolutions of 1848, Slovak volunteers, part of the Imperial Army, won a battle near the city against Hungarian honveds and gardists.[citation needed]

The city boomed in the second half of the 19th century as new railway tracks were built: the Kassa Oderberg Railway was finished in 1872 and the railway to Bratislava (Pozsony in Hungarian) in 1883, and new factories started to spring up, such as the drapery factory Slovena (1891) and the Považie chemical works (1892).

It was one of the first municipalities to sign the Martin Declaration (30 October 1918), and until March 1919 it was the seat of the Slovak government. On 6 October 1938, shortly after the Munich Agreement, the autonomy of Slovakia within Czechoslovakia was declared in Žilina.

During World War II, Žilina was captured on 30 April 1945 by Czechoslovak and Soviet troops of the 4th Ukrainian Front, after which it again became part of Czechoslovakia.

After Second World War, the city continued its development with many new factories, schools and housing projects being built. It was the seat of the Žilina Region from 1949–1960 and again since 1996.

Today Žilina is the third largest city in Slovakia, the third most important industrial center and the seat of a university, the Žilinská univerzita (founded in 1953). Since 1990 the historical center of the city has been largely restored and the city has built trolleybus lines.

Žilina lies at an altitude of 342 metres (1,122 ft) above sea level and covers an area of 80.03 square kilometres (30.9 sq mi).[3] It is located in the Upper Váh region (Slovak: Horné Považie) at the confluence of three rivers: Váh, flowing from east into south-west, Kysuca, flowing from north and Rajčanka rivers from south, in the Žilina Basin. The city is surrounded by these mountain ranges: Malá Fatra, Súľovské vrchy, Javorníky and Kysucká vrchovina. Protected areas nearby include the Strážov Mountains Protected Landscape Area, the Kysuce Protected Landscape Area, and the Malá Fatra National Park. There are two hydroelectric dams on the Váh river around Žilina: the Žilina dam in the East and the Hričov dam in the West.

Žilina lies in the north temperate zone and has a continental climate with four distinct seasons. It is characterized by a significant variation between hot summers and cold, snowy winters. The average temperature in July is 18 °C (64 °F), in January, −4 °C (25 °F). The average annual rainfall is 600–700 mm (23.6–27.6 in), most of the rainfall is in June and in the first half of July. Snow cover lasts from 60 to 80 days per year.

The coat-of-arms of Žilina is a golden double-cross (so-called cross of Lorraine) with roots and two golden stars on an olive-green background. The double-cross is of Byzantine origin and stems from Cyrillic-methodic tradition. The coat-of-arms is one of the oldest municipal coat-of-arms not only in Slovakia but in Europe. It has been used as the city's symbol since 1378.

By far the biggest and most important employer is Korean car maker Kia Motors. By 2009, the car plant produced 300,000 cars a year and employed up to 3,000 employees. Kia Motors' direct investment in the Žilina car plant amounts to over 1.5 billion USD. In 2009 the Žilina car plant produced Kia cee’d, Kia Sportage and Hyundai ix35 car models. Kia Motors is further upgrading its capacity to be ready to produce engines for a sister company Hyundai located nearby Ostrava in the Czech Republic with planned investment of 200 million USD.

Žilina is also the seat of the biggest Slovakian construction and transportation engineering company Vahostav. The chemical industry is represented by Považské chemické závody and Tento, a paper mill company. Siemens Mobility also has an engineering center in Žilina.[5] 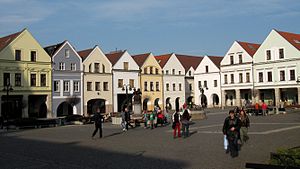 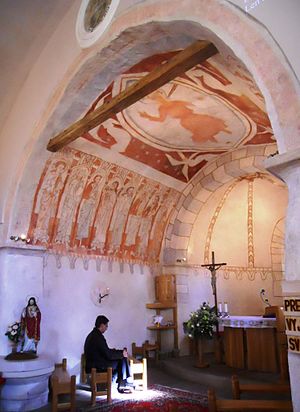 Frescoes inside the church of St Stephen the King

The historical center of the city, reconstructed in the early 1990s is protected as a city monument reserve (Slovak: Mestská pamiatková rezervácia). It is centered on the Mariánske námestie and Andrej Hlinka squares. The Mariánske námestie square has 106 arcade passages and 44 burgher houses along the whole square.[6] It is dominated by the Church of St. Paul the Apostle, the old building of the city council, and the baroque statue of the Virgin Mary. Nearby is the Church of the Holy Trinity, a sacral building built around 1400, which is since February 2008 the cathedral of the Diocese of Žilina.

The Church of Saint Stephen the King (Slovak: Kostol Sv. Štefana krála) is the oldest architectural relic of town Zilina,[7] located just 1 kilometre (0.6 miles) southwest from the center. It is one of the first Romanesque churches in Slovakia,[8] dating back to the years 1200-1250, by the experts. The legend goes that the Hungarian King Stephen I himself ordered to build it. Valuable is the inner decoration of the church. Wall paintings originate form approximately 1260; in 1950 they were discovered and later on restored by the Žilina fine artist Mojmír Vlkoláček.[9] Nowadays it is a popular place for wedding ceremonies.

Other landmarks around the city include:

In addition, the city is a starting point for various locations of western and eastern Slovakia, including hiking trails into the Lesser Fatra and Greater Fatra mountains. Other locations of interest include Bojnice Castle, Strečno, Orava region, and the villages of Čičmany and Vlkolínec.

Football (soccer) club MŠK Žilina plays in the top Slovak division Fortuna liga and is one of the most successful teams in recent years, having won five domestic titles and three runner-ups in the period between 2001-2010. The team's colors are the yellow and green from the city's flag. Home games are played at the Stadium Pod Dubňom which is situated at the edge of city center in the neighborhood of the ice hockey stadium. They played in the 2010-11 UEFA Champions League in the group stage for the first time in their history.

Ice hockey club MsHK Žilina plays in the Slovak Extraliga. They have won one domestic title so far.

Rugby club plays in Slovak league, and is the one with the best location in Slovakia. They participate to the Czech championship, with the support of Olomouc Rugby Club, and made a partnership with Rugby Klub Bratislava to organize rugby events.

Slovak professional road bicycle racer for World Tour team Tinkoff-Saxo, Peter Sagan was born in Žilina in 1990, and is considered one of cycling's most promising young talents, having earned many prestigious victories in his early twenties. He was the winner of the points classification in the Tour de France in 2012 through 2015; as a result, Sagan became the second rider to win the classification in his first four attempts, after Freddy Maertens.[citation needed] In 2015, he was also the first Slovakian cyclist to win the UCI Road World Championships. 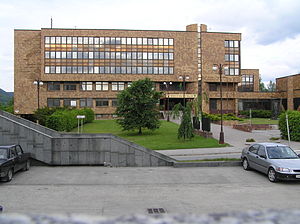 The city is governed by a mayor (Slovak: primátor) and a city council (Slovak: mestské zastupiteľstvo). The mayor is the head of the city and its chief executive, with a four-year term of office. The current mayor, Igor Choma, was nominated in 2010 by a coalition of the political parties SMER-SD, SZ, ĽS-HZDS and HZD. The council is the city's legislative body, with 31 councilmen. The last municipal election was held in 2010 and councilmen are elected to four-year terms, concurrent with the mayor's. Žilina is divided into eight electoral districts, consisting of the following neighborhoods:[10]

Žilina is the capital of one of eight considerably autonomous Regions of Slovakia.[11] It is also the capital of a smaller district. The Žilina District (Slovak: okres Žilina) is nested within the Žilina Region. The city also hosts a regional branch of the National Bank of Slovakia. 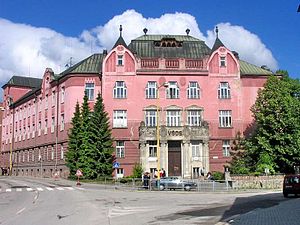 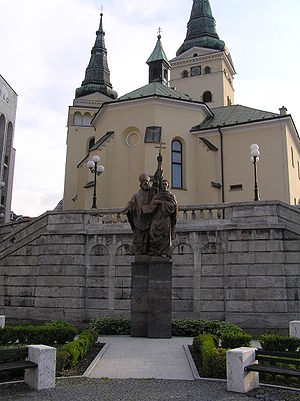 Memorial dedicated to Saints Cyril and Methodius, with Holy Trinity Church in the background

The city is home to the University of Žilina, which has seven faculties and 12,402 students, including 625 doctoral students.[12]

The city is an important international road junction, and Žilina railway station is a major rail junction.

Roads and railways connect the city with Bratislava and Prievidza in the south, Čadca in the north, and Martin in the east. The construction of the D1, and D3 motorways and their feeders continues towards Žilina.

The city is also served by international Žilina Airport, which is some 10 kilometres (6 miles) away from the city center.

Žilina has several twin towns around the world:[18]