From Infogalactic: the planetary knowledge core
Jump to: navigation, search
This article is about the time difference between UT and TT. For other uses, see ΔT (disambiguation).
For related shorter-term variations, see Fluctuations in the length of day. 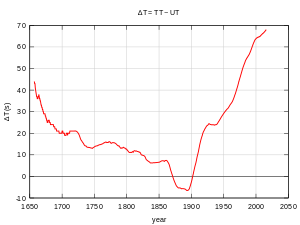 Universal Time is a time scale based on the Earth's rotation, which is somewhat irregular over short periods (days up to a century), thus any time based on it cannot have an accuracy better than 1 : 108. But the principal effect is over the long term: over many centuries tidal friction inexorably slows Earth's rate of rotation by about +2.3 ms/day/cy. However, there are other forces changing the rotation rate of the Earth. The most important one is believed to be a result of the melting of continental ice sheets at the end of the last glacial period. This removed their tremendous weight, allowing the land under them to begin to rebound upward in the polar regions, which has been continuing and will continue until isostatic equilibrium is reached. This "post-glacial rebound" brings mass closer to the rotation axis of the Earth, which makes the Earth spin faster (law of conservation of angular momentum)[clarification needed]: the rate derived from models is about −0.6 ms/day/cy. So the net acceleration (actually a deceleration) of the rotation of the Earth, or the change in the length of the mean solar day (LOD), is +1.7 ms/day/cy. This is indeed the average rate as observed over the past 27 centuries.[3]

Terrestrial Time is a theoretical uniform time scale, defined to provide continuity with the former Ephemeris Time (ET). ET was an independent time-variable, proposed (and its adoption agreed) in the period 1948–52[4] with the intent of forming a gravitationally uniform time scale as far as was feasible at that time, and depending for its definition on Simon Newcomb's Tables of the Sun (1895), interpreted in a new way to accommodate certain observed discrepancies.[5] Newcomb's tables formed the basis of all astronomical ephemerides of the Sun from 1900 through 1983: they were originally expressed (and published) in terms of Greenwich Mean Time and the mean solar day,[6] but later, in respect of the period 1960–1983, they were treated as expressed in terms of ET,[7] in accordance with the adopted ET proposal of 1948–52. ET, in turn, can now be seen (in light of modern results)[8] as close to the average mean solar time between 1750 and 1890 (centered on 1820), because that was the period during which the observations on which Newcomb's tables were based were performed. While TT is strictly uniform (being based on the SI second, every second is the same as every other second), it is in practice realised by International Atomic Time (TAI) with an accuracy of about 1 : 1014.

Earth's rate of rotation must be integrated to obtain time, which is Earth's angular position (specifically, the orientation of the meridian of Greenwich relative to the fictitious mean sun). Integrating +1.7 ms/d/cy and centering the resulting parabola on the year 1820 yields (to a first approximation) 31×((Year − 1820)/100)2 seconds for ΔT. Smoothed historical measurements of ΔT using total solar eclipses are about +16800 s at the year −500 (501 BC), +10600 s at 0 (1 BC), +5700 s at 500 (AD), +1600 s at 1000, and +180 s at 1500. After the invention of the telescope, measurements were made by observing occultations of stars by the Moon, which allowed the derivation of more closely spaced and more accurate values for ΔT. ΔT continued to decrease until it reached a plateau of +11±6 s between 1680 and 1866. For about three decades immediately before 1902 it was negative, reaching −6.64 s. Then it increased to +63.83 s at 2000. It will continue to increase at an ever faster (quadratic) rate in the future. This will require the addition of an ever greater number of leap seconds to UTC as long as UTC is kept within one second of UT1. (The SI second as now used for UTC, when adopted, was already a little shorter than the current value of the second of mean solar time.[9]) Physically, the meridian of Greenwich in Universal Time is almost always to the east of the meridian in Terrestrial Time, both in the past and in the future. +16800 s or ​4 2⁄3 h corresponds to 70°E. This means that at −500 (501 BC), Earth's faster rotation would cause a total solar eclipse to occur 70° to the east of the location calculated using the uniform TT.

All values of ΔT before 1955 depend on observations of the Moon, either via eclipses or occultations. Conservation of angular momentum in the Earth-Moon system requires that the angular momentum lost by the Earth due to tidal friction be transferred to the Moon, increasing its angular momentum, which means that its moment arm (its distance from the Earth) is increased (for the time being about +3.8 cm/year), which via Kepler's laws of planetary motion causes the Moon to revolve around the Earth at a slower rate. The cited values of ΔT assume that the lunar acceleration (actually a deceleration = a negative acceleration) due to this effect is dn/dt = −26"/cy2, where n is the mean sidereal angular motion of the Moon. This is close to the best estimate for dn/dt as of 2002 of −25.858±0.003"/cy2[10] so ΔT need not be recalculated given the uncertainties and smoothing applied to its current values. Nowadays, UT is the observed orientation of the Earth relative to an inertial reference frame formed by extra-galactic radio sources, modified by an adopted ratio between sidereal time and solar time. Its measurement by several observatories is coordinated by the International Earth Rotation and Reference Systems Service (IERS).