From Infogalactic: the planetary knowledge core
Jump to: navigation, search
For the movie with the same name, see .45 (film).
Not to be confused with .45 Colt.

The .45 ACP (Automatic Colt Pistol), or .45 Auto (11.43×23mm) is a handgun cartridge designed by John Browning in 1905, for use in his prototype Colt semi-automatic pistol. After successful military trials it was adopted along with the Browning .45 Colt handgun as the .45 M1911 cartridge. The handgun was designated M1911 handgun.[1]

The U.S. Cavalry had been buying and testing various handguns in the late 1890s and early 20th century. The .45 Colt Single Action Army (SAA) had largely been replaced, even by some double-action versions of the same caliber. The Army had fielded some double-action revolvers in .38 Long Colt. They determined the .38 caliber round was significantly less effective than the .45 Colt against determined opponents such as the Moro juramentado warriors encountered in the Moro Rebellion.[2][3][4][5] The then-current issue rifle, the .30-40 Krag, had also failed to stop Moro warriors effectively;[6] the British had similar issues switching to the .303 British, which resulted in the development of the dum-dum bullet. This experience, and the Thompson–LaGarde Tests of 1904 led the Army and the Cavalry, to decide a minimum of .45 caliber was required in the new handgun. Thompson and Major Louis Anatole La Garde of the Medical Corps arranged tests on cadavers and animal remains in the Chicago stockyards, resulting in the finding that .45 was the most effective pistol cartridge. They noted, however, training was critical to make sure a soldier could score a hit in a vulnerable part of the body.

Colt had been working with Browning on a .41 caliber cartridge in 1904, and in 1905, when the Cavalry asked for a .45 caliber equivalent, Colt modified the pistol design to fire an enlarged version of the prototype .41 round. The result from Colt was the Model 1905 and the new .45 ACP cartridge. The original round that passed the testing fired a 200 grain (13 g) bullet at 900 ft/s (275 m/s), but after a number of rounds of revisions between Winchester Repeating Arms, Frankford Arsenal, and Union Metallic Cartridge, it ended up using a 230 grain (14.9 g) bullet fired at a nominal velocity of 850 ft/s (260 m/s). The resulting .45-caliber cartridge, named the .45 ACP, was similar in performance to the .45 Schofield cartridge, and only slightly less powerful (but significantly shorter) than the .45 Colt cartridges the Cavalry was using.

By 1906, bids from six makers were submitted, among them Browning's design, submitted by Colt. Only DWM, Savage, and Colt made the first cut. DWM, which submitted two Parabellum P08s chambered in .45 ACP, withdrew from testing after the first round of tests, for unspecified reasons.[7]

In the second round of evaluations in 1910, the Colt design passed the extensive testing with no failures, while the Savage design suffered 37 stoppages or parts failures.[7] The Colt pistol was adopted as the Model 1911.

The cartridge/pistol combination was quite successful but not satisfactory for U.S. military purposes. Over time, a series of improved designs were offered, culminating in the adoption in 1911 of the "Cal. .45 Automatic Pistol Ball Cartridge, Model of 1911", a 1.273 in (32.3 mm) long round with a bullet weight of 230 grains (15 g). The very first production, at Frankford Arsenal, was marked "F A 8 11", for the August 1911 date.

The cartridge was designed by John Browning for Colt, but the most influential person in selecting the cartridge was Army Ordnance member Gen. John T. Thompson. Thompson insisted on a real "man stopper" pistol, following the poor showing of the Army's .38 Long Colt pistols during the Philippine–American War (1899–1902).[citation needed] 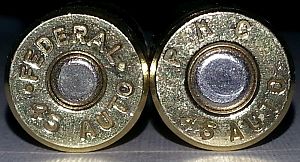 The .45 ACP is manufactured with both large and small pistol primers. 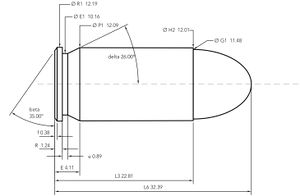 According to Commission Internationale Permanente pour l'Epreuve des Armes à Feu Portatives rulings, the .45 ACP cartridge case can handle up to 131.000 MPa (18,999.9 psi) Pmax piezo pressure. In CIP-regulated countries every pistol cartridge combination has to be proofed at 130% of this maximum CIP pressure to certify for sale to consumers. This means that .45 ACP chambered arms in C.I.P. regulated countries are currently (2016) proof tested at 170.30 MPa (24,700 psi) PE piezo pressure.[8]

Recent testing of the three major Police and Military calibers by the Federal Bureau of investigation found that the .45 ACP was no more effective with regard to terminal ballistics than either 9 x 19mm Parabellum or .40 S&W. The FBI recommendation to return to using 9 x 19mm Parabellum was largely based on the reduction in accuracy when the .40 S&W had been adopted after a failure of the 10mm S&W handgun. The FBI had requested a large and powerful cartridge be developed due to the poor performance of 9 x 19mm Parabellum and .45 ACP in actual use. After two years of testing one of the final FBI comments was that services that adopt (or stay with .40 S&W or .45 ACP) did so at the risk of loss of accuracy and effectiveness as 9 x 19mm with premium quality ammunition outperformed both.[11]

The .45 ACP cartridge has relatively low muzzle blast and flash, but produces heavy recoil in handguns made worse in compact models. The standard issue military .45 ACP round has a 230 grain bullet that travels at approximately 830 feet per second when fired from the government issue M1911A1 pistol and approximately 950 feet per second from the M1A1 Thompson sub-machine gun. The cartridge also comes in various specialty rounds of varying weights and performance levels.[1]

A factor rated by the recent FBI testing was accuracy and time to recover. The .45 ACP handguns ranked last, largely due to heavy recoil. The .40 S&W was found to be 40% less accurate when adopted by Police departs to replace 9mm. Additionally, some firearms selected were also less safe.[11]

In its non-expanding full metal jacket (FMJ) version, the .45 ACP cartridge has a reputation for effectiveness against human targets because its large diameter creates a deep and substantial permanent wound channel which lowers blood pressure rapidly. This is reputation only as the FBI found no effective difference in wounds from 9 x 19mm, .40 S&W or .45 ACP.[11][dubious – discuss]

Because of its large diameter and straight-walled design, the .45 ACP geometry is the highest power-per-pressure production, repeating round in existence. This is because of the higher powers achievable with .45 Super, and +P loads. Because of these inherent low pressures of the standard pressure round however, compensators and brakes have little effect until +P and Super loads are utilized.[12]

The table below shows common performance parameters for several .45 ACP loads. Bullet weights ranging from 185 to 230 grains are common. Penetration depths from 11 inches to over 27 inches are available for various applications and risk assessments.[citation needed]

Lead Free .45 ACP (note all are Plus P not to be used in older or non Plus P certified handguns)

With standard (not extended) single-stack magazines, pistols chambered in .45 ACP usually hold 8 rounds or less (exceptions to this include the 10-round standard 14 round extended capacity .45 ACP from Sig Sauer in their P227 [13] and 13 round Glock 21.[14] and 15 rounds, such as the .45 ACP versions of the FN FNP and FN FNX, though this greatly increases the pistol's bulk and with that lowers maneuverability.[15] 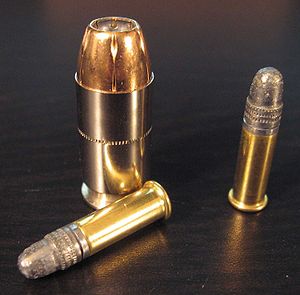 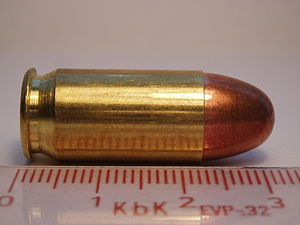 Side on view of Sellier & Bellot .45 ACP cartridge with a metric ruler for scale

Many US tactical police units still use the .45 pistol round, including the FBI's Hostage Rescue Team.[16][17][18] While high capacity firearms are available in .45 ACP, the greater length and diameter of the .45 ACP means that the grip of the pistol must be longer and wider than the grip of a comparable pistol of a smaller caliber; this increase in grip size can make the pistol difficult to use for shooters with smaller hands.

Today, most NATO militaries use sidearms chambered for the 9×19mm Parabellum cartridge, but the effectiveness of the .45 ACP cartridge has ensured its continued popularity with large caliber sport shooters, especially in the United States.[19] In addition, select military and police units around the world still use firearms firing the .45 ACP.[19] In 1985, the .45 ACP M1911A1 pistol was replaced by the Beretta M9 9mm pistol as the main sidearm of the U.S. military, although select Special Operations units continue to use the M1911A1 or other .45 ACP pistols.

Because standard pressure and load .45 ACP rounds fired from handguns or short barreled submachine guns are inherently subsonic, it is one of the most powerful pistol calibers available for use in suppressed weapons since subsonic rounds are quieter than supersonic rounds. The latter inevitably produce a highly compressed shock wave, audible as a loud "crack", literally a small sonic boom, while they travel through the air. Suppressors reduce the audible "report" by slowing and channeling the high speed gas generated by the burning/expanding gunpowder before it exits the muzzle resulting in a muffled "cough". Suppressors cannot act on a supersonic shock wave continuously generated by a bullet exceeding the 1,087 ft/s (331 m/s) speed of sound at 32 °F (0 °C) ambient cold temperatures, as this shock wave is continuously produced throughout the entire flight path over which the bullet is supersonic, which extends long after it exits the barrel.

The downside to the use of .45 ACP in suppressed weapons is that increasing the diameter of the passage through a suppressor decreases the suppressor's efficiency; thus, while .45 ACP is among the most powerful suppressed pistol rounds, it is also one of the loudest. Most .45 suppressors must be fired "wet" (with an ablative medium, usually water) to bring sound levels down to "hearing-safe" (under 140 dB, generally).[20] 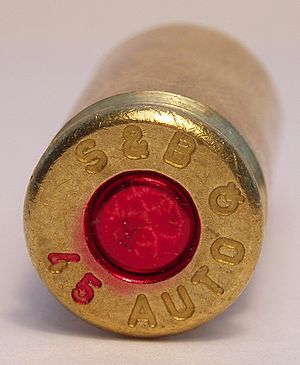 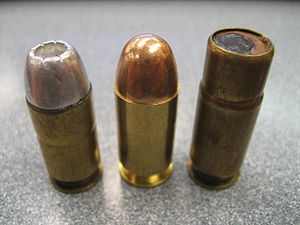 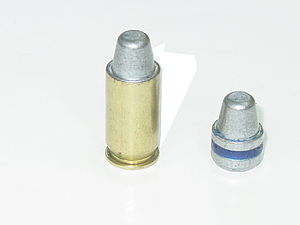 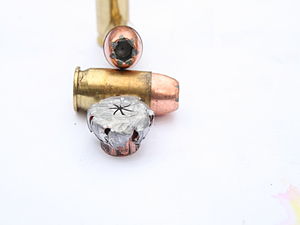 Rounds are available from 68 grains to 255 grains (4.4 g to 16.5 g) with a common load being the standard military loading of a 230-grain (15 g) FMJ bullet at around 850 ft/s (259 m/s). Specialty rounds are available in weights under 100 grains (6.5 g) and over 260 grains (16.8 g); popular rounds among reloaders and target shooters include 185-grain and 230-grain (12 g and 15 g) bullets.[citation needed] Hollow-point rounds intended for maximum effectiveness against live targets are designed to expand upon impact with soft tissue, increasing the size of the permanent cavity left by the bullet as it passes through the target.

Most ammunition manufacturers also market what are termed "+P" (pronounced "plus P") loadings in pistol ammunition, including the .45 ACP. This means the cartridge is loaded to a higher maximum pressure level than the original SAAMI cartridge standard, generating higher velocity and more muzzle energy. In the case of the .45 ACP, the standard cartridge pressure is 21,000 psi (140 MPa) and the SAAMI .45 ACP +P standard is 23,000 psi (160 MPa). This is a common practice for updating older cartridges to match the better quality of materials and workmanship in modern firearms.[19]

Popular derivative versions of the .45 ACP are the .45 Super and .460 Rowland.[19] The Super is dimensionally identical to the .45 ACP; however, the cartridge carries a developer established pressure of 28,500 psi (197 MPa) and requires minor modification of quality firearms for use. The Rowland case is 0.057 inches (1.4 mm) longer specifically to prevent it from being chambered in standard .45 ACP firearms. The Rowland operates at a developer established 40,000 c.u.p. and may only be used within a select group of firearms significantly modified for this purpose. Brass cases for each of these cartridges carry the applicable name within the headstamp. The Super provides approximately 20% greater velocity than the .45 ACP +P; the Rowland approximately 40% greater velocity than the .45 ACP +P.[19]