The .50 Browning Machine Gun (.50 BMG, 12.7×99mm NATO and designated as the 50 Browning by the C.I.P.[1]) is a cartridge developed for the Browning .50 caliber machine gun in the late 1910s. Entering service officially in 1921, the round is based on a greatly scaled-up .30-06 cartridge. Under STANAG 4383, it is a standard cartridge for NATO forces as well as many non-NATO countries. The cartridge itself has been made in many variants: multiple generations of regular ball, tracer, armor-piercing (AP), incendiary, and saboted sub-caliber rounds. The rounds intended for machine guns are linked using metallic links.

The .50 BMG cartridge is also used in long-range target and sniper rifles, as well as other .50-caliber machine guns.

A wide variety of ammunition is available, and the availability of match grade ammunition has increased the usefulness of .50 caliber rifles by allowing more accurate fire than lower quality rounds.[3]

John Browning had the idea for this round during World War I in response to a need for an anti-aircraft weapon, based on a scaled-up .30-06 Springfield design, used in a machine gun based on a scaled-up M1919/M1917 design that Browning had initially developed around 1900 (but which was not adopted by the U.S. military until 1917, hence the model designation).[4] Armor-piercing incendiary tracer (APIT) rounds were especially effective against aircraft, and the AP rounds and armor-piercing incendiary (API) rounds were excellent for destroying concrete bunkers, structures, and lighter AFVs. The API and APIT rounds left a flash, report, and smoke on contact, useful in detecting strikes on enemy targets.[5]

The development of the .50 BMG round is sometimes confused with the German 13.2 mm TuF, which was developed by Germany for an anti-tank rifle to combat British tanks during WWI; however, the development of the U.S. .50 caliber round was started before this later German project was completed or even known to the Allied countries. When word of the German anti-tank round spread, there was some debate as to whether it should be copied and used as a base for the new machine gun cartridge; after some analysis the German ammunition was ruled out, both because performance was inferior to the scaled-up .30-06 Springfield round and because it was a semi-rimmed cartridge, making it sub-optimal for an automatic weapon. The round's dimensions and ballistic traits are totally different. Instead, the M2HB Browning with its .50 caliber armor-piercing cartridges went on to function as an anti-aircraft and anti-vehicular machine gun, with a capability of completely perforating 0.875" (22.2 mm) of face-hardened armor steel plate at 100 yards (91 m), and 0.75" (19 mm) at 547 yards (500 m).[6]

Decades later, the .50 BMG was chambered in high-powered rifles as well.[4] The concept of a .50 caliber machine gun was not an invention of this era; this caliber (.50) had been used in Maxim machine guns and in a number of manual rapid-fire guns such as the original Gatling, although these were much lower power cartridges.

During World War II the .50 BMG was primarily used in the M2 Browning machine gun, in both its "light barrel" aircraft mount version and the "heavy barrel" (HB) version on ground vehicles, for anti-aircraft purposes. An upgraded variant of the M2 Browning "HB" machine gun used during World War II is still in use today. Since the mid-1950s, some armored personnel carriers and utility vehicles have been made to withstand 12.7 mm machine gun fire, thus making it a much less flexible weapon. It still has more penetrating power than lighter weapons such as general-purpose machine guns, though it is significantly heavier and more cumbersome to transport. Its range and accuracy, however, are superior to light machine guns when fixed on tripods, and it has not been replaced as the standard caliber for western vehicle mounted machine guns (Soviet and CIS armoured vehicles mount the 12.7×108mm NSV, which is ballistically similar to the .50 BMG.)[citation needed]

The Barrett M82 .50 caliber rifle and later variants were developed during the 1980s and have upgraded the anti-materiel power of the military sniper.[4] A skilled sniper can effectively neutralize an infantry unit by eliminating several targets (soldiers or equipment) without revealing his precise location. The long range (1 mile+) between firing position and target allows time for the sniper to avoid enemy retribution by either changing positions repeatedly, or by safely retreating.

A common method for understanding the actual power of a cartridge is by comparing muzzle energies. The .30-06 Springfield, the standard caliber for American soldiers in both World Wars and a popular caliber amongst American hunters, can produce muzzle energies between 2,000 and 3,000 foot-pounds of energy (between 3 and 4 kilojoules). The .50 BMG round can produce between 10,000 and 15,000 foot pounds (between 14 and 18 kilojoules), depending on its powder and bullet type, as well as the weapon it was fired from. Due to the high ballistic coefficient of the bullet, the .50 BMG's trajectory also suffers less "drift" from cross-winds than smaller and lighter calibers, making the .50 BMG a good choice for high-powered sniper rifles.[7] 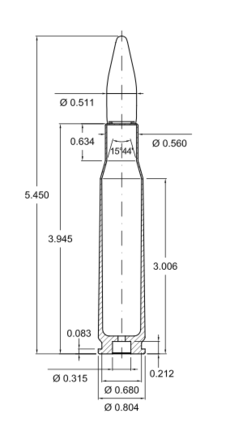 The .50 BMG (12.7×99mm NATO) cartridge has a capacity of 290 grains H2O (19 ml). The round is a scaled-up version of the .30-06 Springfield but uses a case wall with a long taper to facilitate feeding and extraction in various weapons.

The common rifling twist rate for this cartridge is 1 in 15 in (380 mm), with 8 lands and grooves. The primer type specified for this ammunition is Boxer primer that has a single centralized ignition point (US and NATO countries).[8] However, some other countries produce the ammunition with Berdan primers that have two flash holes. 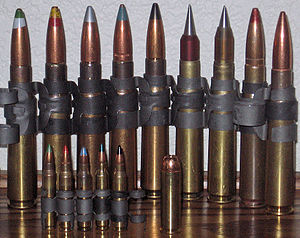 .50 BMG cartridges are also produced commercially with a plethora of different bullets and to a number of different specifications.

DARPA (Defense Advanced Research Projects Agency) has contracted with Lockheed Martin to develop the EXACTO program, including .50-caliber bullets complete with microprocessors and steering vanes that allow the bullet to adjust its trajectory mid-flight when the flight path has changed.[17][18][19]

Two distinct and non-compatible metallic links have been used for the .50 BMG cartridge, depending upon the machine gun which will be firing the cartridges. The M2 and M9 links, "pull-out" designs, are used in the Browning M2 and M3 machine guns. Pull-out cloth belts were also used at one time, but have been obsolete since 1945. The M15-series "push-through" links were used in the M85 machine gun.

The specified maximum diameter of an unfired .50 BMG bullet is 0.510-inch (13.0 mm); while this appears to be over the .50 inch (12.7 mm) maximum allowed for non-sporting Title I firearms under the U.S. National Firearms Act, the barrel of a .50 BMG rifle is only .50 inch (12.7 mm) across the rifling lands and slightly larger in the grooves. The oversized bullet is formed to the bore size upon firing, forming a tight seal and engaging the rifling, a mechanism which in firearms terms is known as engraving.[citation needed] Subject to political controversy due to the great power of the cartridge (it is the most powerful commonly available cartridge not considered a destructive device under the National Firearms Act), it remains popular among long-range shooters for its accuracy and external ballistics. While the .50 BMG round is able to deliver accurate shot placement (if match grade ammunition is used) at ranges over 1,000-yard (910 m), smaller caliber rifles produce better scores and tighter groups in 1,000-yard (910 m) competitions.[20]

In response to legal action against the .50 BMG in the United States and Europe, an alternative chambering was developed. The .510 DTC Europ uses the same bullet, but has slightly different case dimensions. .510 DTC cases can be made by fire-forming .50 BMG cases in a .510 DTC chambered rifle. The new round has almost identical ballistics, but because of the different dimensions, rifles chambered for .50 BMG cannot fire the .510 DTC, and therefore rifles chambered for .510 DTC do not fall under many of the same legal prohibitions. Barrett offers a similar alternative, the .416 Barrett, which is based on a shortened .50 BMG case necked down to .416 caliber (10.3 mm).

A 1999 Justice Department Office of Special Investigations briefing on .50 caliber rifle crime identified several instances of the .50 BMG being involved in criminal activities.[21] Most of the instances of criminal activity cited in the Office of Special Investigations briefing involved the illegal possession of a .50 BMG rifle. The briefing did not identify any instance of a .50 BMG rifle being used in the commission of a murder.

In the United States of America, California prohibits the private purchase of a rifle capable of firing the .50 BMG through the .50 Caliber BMG Regulation Act of 2004.

Within the United Kingdom, it is legal to own a .50 BMG rifle with a section 1 Firearms Certificate.[22] Applications requesting firearms in this caliber are not subject to any extra scrutiny compared to smaller calibers.[23]

There have been persistent reports of a belief among some members of the United States Armed Forces that the use of .50 BMG in a direct antipersonnel role is somehow prohibited by the laws of war. This is incorrect and has been characterized as a myth; writing for the Marine Corps Gazette, Maj. Hays Parks states that "No treaty language exists (either generally or specifically) to support a limitation on [the use of .50 BMG] against personnel, and its widespread, longstanding use in this role suggests that such antipersonnel employment is the customary practice of nations." Parks theorizes that the myth originated in historical doctrine discouraging the use of the M8C spotting rifle—an integral .50-caliber aiming aid for the M40 recoilless rifle—in the antipersonnel role. This limitation was entirely tactical in nature, having been intended to help conceal the vulnerable M40 and its crew from the enemy before the main anti-tank gun could be fired, but some personnel may have erroneously assumed the existence of a legal limitation on the use of .50-caliber projectiles more generally.[24]

The primary military use of this round is in the Browning M2HB heavy machine gun.

The U.S. Coast Guard uses .50 BMG rifles to disable outboard engines from armed helicopters during interdictions. Similarly, .50 BMG weapons have attracted attention from law enforcement agencies; they have been adopted by the New York City Police Department as well as the Pittsburgh Police. A .50 BMG round can effectively disable a vehicle when fired into the engine block. If it is necessary to breach barriers, a .50 BMG round will penetrate most commercial brick walls and concrete cinder blocks.

The .50 BMG round has been used as a sniper round as early as the Korean War.[25] The former record for a confirmed long-distance kill was set by U.S. Marine sniper Carlos Hathcock in 1967, at a distance of 2,090 metres (2,286 yd);[26] Hathcock used the .50 BMG in an M2 Browning Machine Gun equipped with a telescopic sight. This weapon was used by other snipers, and eventually purpose-built sniper rifles were developed specifically for this round.

In addition to long-range and anti-materiel sniping, the U.S. military uses .50 BMG weapons to detonate unexploded ordnance from a safe distance. It can disable most unarmored and lightly armored vehicles.[30]