020 is the national dialling code for London in the United Kingdom. The area it serves, which includes most of Greater London and some adjacent areas, was first allocated the STD code 01 in 1959. After a sequence of changes in the 1990s, culminating with the Big Number Change, the current 020 code became active on 1 June 1999.[notes 1] All subscriber numbers within the area code consist of eight digits and it has capacity for approaching 100 million telephone numbers. The code is used at 170 telephone exchanges as part of the largest linked numbering scheme in the United Kingdom. In common with all other British area codes the initial '0' is a trunk prefix that is not required when dialling London from abroad.

The 020 dialling code is also used by the Foreign and Commonwealth Office Telecommunications Network, provided by Global Crossing, and is one of two dialling codes for the remote South Atlantic island of Tristan da Cunha.[1]

Before the introduction of national dialling codes, the area now served by 020 operated as a large multiple telephone exchange system known as the London telephone area. The first exchange in this area, Central, was opened in the City of London on 1 March 1902.[2] The director telephone system was developed so that subscribers in London could call each other as part of a linked numbering scheme regardless of whether they were on a manual or automatic local exchange.

In 1927, Holborn, the first Director automatic exchange in London, was cutover at midnight on Saturday 12 November. As it was a largely business exchange, most subscribers did not use the new system until Monday 14 November. The changeover was successful, although there were some delays as the subscribers were not familiar with dialling. Bishopgate and Sloane exchanges were to follow in six weeks, followed by Western and Monument exchanges. As the London area contained 80 exchanges, complete conversion would take many years.[3][4]

From 1922, the first three digits of a seven-digit subscriber number – in other words, the local exchange codes – were represented with letters by way of a mnemonic. Each three-character code corresponded to an exchange within the London telephone area. The subscriber numbers were written, for example, as "ABBey 1234" and "WIMbledon 1234" or "ABB 1234" and "WIM 1234". By 1965, there were 350 local exchanges in London and the number of permutations that could be used for exchange names had been exhausted.[8] With the change to all-figure dialling in 1966, the system of mnemonics was withdrawn and the three-digit local exchange codes of many subscribers were altered. The old codes continued to work in parallel with new codes until January 1970, when the "ANN: All-figure Numbers Now" advertising campaign prompted callers to use only the new codes.[9] The transition to all-figure dialling allowed the codes to be grouped into eight sectors; all exchanges within 6 kilometres (3.7 mi) of the centre of London formed the Central sector and the other sectors radiated from it.[10]

The first three digits of a subscriber number continued to indicate the exchange to which the number belonged; for example, "222 1234" was in Westminster (Central Sector) and "946 1234" in Wimbledon (South West Sector).[notes 2] More than one local exchange code was usually overlaid for each area, so all Wimbledon numbers did not necessarily begin "946". Subscriber numbers changed to eight digits in 2000 when an additional 7 or 8 was added to each local exchange code (for example, "7222 1234" in Westminster and "8946 1234" in Wimbledon).

The STD code 01 was assigned to the London telephone area on 6 April 1959 as part of preparations for subscriber trunk dialling.[11] For the next thirty years, "01" became synonymous with the capital.[12] Until May 1990, the 01 code covered the same area as the current 020 code and had capacity for fewer than 10 million telephone numbers.[13]

In May 1990, the 01 code was abandoned and the area divided between 071 – which covered exchanges in the Central sector – and 081, which covered all other sectors. Exceptionally, two exchanges in the East sector[notes 3] covering the London Docklands redevelopment area were assigned the 071 code.[14] The anticipation that the code associated with central districts would be more prestigious than the other associated with the outer suburbs[15][16] was used as a plot device in the Essex-based TV comedy series Birds of a Feather.[17] At the time of the split, there were five local exchange codes assigned to Mercury Communications[notes 4] and numbers in these ranges could be assigned to either code.[14] This area code split doubled the potential capacity.[13] In 1995, on "PhONEday", the codes changed again, to 0171 and 0181.

The reunification under a single code created capacity for approaching 100 million telephone numbers[13] and, starting in 2005, subscriber numbers beginning with the digit "3" were issued alongside those beginning "7" and "8".[13]

The London telephone area operated as a single group for charging purposes in which all calls were priced at local rate. Additionally, as was usual, calls to and from the adjacent charge groups were charged as local.[notes 5] 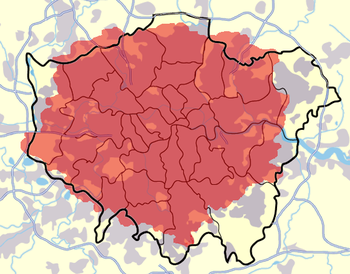 The code serves a roughly circular area with a radius of 20 kilometres (12 mi) from the centre of London. The Greater London boundary varies from 17 kilometres (11 mi) to 32 kilometres (20 mi) from the centre and consequently some outer districts are covered by adjacent codes and in some places the 020 code extends beyond the Greater London boundary. The code covers an area larger than the London post town where letters addressed to "LONDON" are delivered.

The City of London and at least some part of all 32 London boroughs are within the 020 area code. There are six exchanges outside Greater London that use the 020 code.[notes 6] Communities outside Greater London that are within the code are Buckhurst Hill, Chigwell, Loughton and Sewardstone in Essex; Borehamwood, Bushey, Carpenders Park, Elstree and South Oxhey in Hertfordshire; and Ewell, Molesey, Thames Ditton and Whyteleafe in Surrey.

In 2006 59% of numbers within the 020 code were allocated to BT.[19] The area code is not subject to number conservation and the regulator Ofcom does not restrict the size of number blocks that are allocated.[20]