Lua error in Module:About-distinguish at line 61: attempt to index field 'wikibase' (a nil value). 1. FC Union Berlin is a professional German association football club based in Berlin. The club emerged in 1966 under the current name in East Germany but can be traced back to 1906, when predecessor FC Olympia Oberschöneweide was founded. They compete in the 2. Bundesliga for the seventh consecutive season.

The home ground Stadion An der Alten Försterei (Stadium by the old forester's house) is the largest single-purpose football stadium in the German capital. It has been home to Union Berlin and its forerunners since it was opened in 1920. The stadium became internationally famous for events like the annual Weihnachtssingen (Christmas Carols Event) and the WM-Wohnzimmer (World Cup Living Room) in 2014.

The club is well known for its enthusiastic and creative fan base and for its slogan "Eisern Union" (Iron Union).

The name 1. FC Union Berlin was used by two football clubs that shared a common origin as FC Olympia 06 Oberschöneweide, founded in 1906 in the Oberschöneweide district of Berlin. The side took on the name SC Union 06 Oberschöneweide in 1910. Union was one of Berlin's premier clubs in the interwar period, regularly winning local championships and competing at the national level, including an appearance in the 1923 German championship final which they lost 0–3 to Hamburger SV.

Early on the team was nicknamed "Schlosserjungs" (English: metalworker-boys), because of their then all blue kit, reminiscent of the typical work clothing worn in the factories of the industrial Oberschöneweide district. The popular cry of Union-supporters – "Eisern Union!" (Iron Union) – also emerged at this time. Since its foundation the club had a clearly working-class image in contrast to other local clubs with middle-class origins, such as Viktoria 89 Berlin, Blau-Weiß 90 Berlin, BSV 92 Berlin or Tennis Borussia Berlin.

In 1933, German football was reorganized under the Third Reich into 16 top flight divisions known as Gauligen. Oberschöneweide became part of the Gauliga Berlin-Brandenburg where they generally earned middling results. They were relegated in 1935 and returned to first division play in 1936 after only one season's absence. In 1940, the team finished first in Group B of the division and then defeated Blau-Weiss (1–2, 3–0) to win the overall division title. That advanced the club to the national playoffs where they were put out by Rapid Wien in the opening group round (2–3, 1–3). Union resumed its place as an unremarkable side. They were relegated again in 1942 and played the final war-shortened Gauliga season in 1944–45. 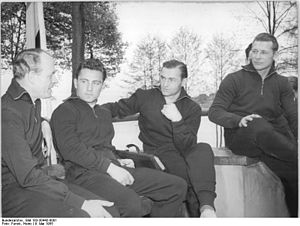 After World War II, occupying Allied authorities ordered the dissolution of all organizations in Germany, including sports and football associations. A new Municipal Sports Group called SG Oberschöneweide was formed in late 1945 and it played in the City League organized immediately after the war which had four regional departments. The team did not qualify to the newly created Oberliga Berlin (I) in 1946 after a poor season, but was promoted in 1947, won the division title right away and regained club status as SG Union 06 Oberschöneweide during 1948–49.

The club finished the 1949–50 season in second place in Berlin and qualified to take part in the national final rounds. However, escalating Cold War tensions led Soviet authorities to refuse the team permission to travel to take part. Two Union teams then emerged as most players and coaches fled to the west to form Sport-Club Union 06 Berlin which took part in the scheduled playoff match in Kiel against Hamburger SV, losing 0:7.[1][2]

The players remaining in the east carried on as Union Oberschöneweide while a number of players who had fled to the west to form SC organized a third side called Berliner Ballspiel-Club Südost. The western team was a strong side until the construction of the Berlin Wall in 1961, drawing huge crowds to matches in the Olympiastadion. The division of the city led to a change of fortunes for the club which plays today in the lower divisions before meager crowds. 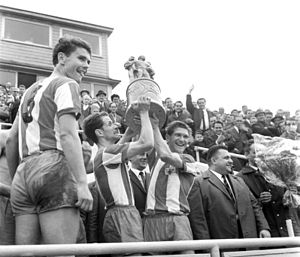 The eastern branch of the club went through a number of name changes: Union Oberschöneweide (1950), BSG Motor Oberschöneweide (1951), SC Motor Berlin (1955), TSC Oberschöneweide (1957), TSC Berlin (1963) – finally becoming the football club 1. FC Union Berlin in 1966. They developed a bitter rivalry with Stasi-sponsored Dynamo Berlin. While their arch rivals won 10 titles in a row in highly dubious circumstances, Union yo-yoed between the Oberliga and the DDR-Liga with very little success, largely due to the East German's government policy of favouring 'elite' clubs at the expense of 'civilian' clubs like Union. Union managed to win the East German Cup in 1968 when they defeated FC Carl Zeiss Jena 2:1 although they lost in their second cup appearance in 1986 to 1. FC Lokomotive Leipzig by a score of 1:5.

After German reunification in 1990, the team continued to perform well on the field, but almost collapsed financially. They managed to hang on through some tight times and find sponsorship, but only after winning their division in both 1993 and 1994 and each time being denied a license to play in the 2. Bundesliga due to their financial problems. The club had another close brush with financial failure in 1997.

Union again came close to advancing to 2.Bundesliga in 1998–99 and 1999–2000, but were disappointed. They were finally successful in 2000–01, under Bulgarian manager Georgi Vasilev, easily winning the Regionalliga Nord (III) and moving up a division to become the city's most popular side after the Bundesliga's Hertha BSC. That same year they appeared in the final of the German Cup where they lost 0–2 to FC Schalke 04, and advanced as far as the second round in UEFA Cup before being put out by Bulgarian side PFC Litex Lovech. The club slipped to the Regionalliga Nord (III) in 2004–05 and then to the NOFV-Oberliga Nord (IV) in 2005–06, but has returned to third division play after capturing the Oberliga title. In 2008–09, Union became one of the founding clubs of the new 3. Liga, and its inaugural champion, securing first place and promotion to the 2. Bundesliga on 10 May.

The main building of the stadium was inaugurated in 2013.

In 1920 SC Union Oberschöneweide (forerunner of today's 1. FC Union Berlin) had to find a new home ground as its former pitch had been built over by developers with residential buildings. The club moved a little further away from the city to the north-western part of the borough of Köpenick. The new stadium was officially opened in August 1920 with a match between Oberschöneweide and the then German champions 1. FC Nuremberg (1:2). The inaugural match in at the Alte Försterei had already been played on 17 March, when Union challenged Viktoria 89 Berlin. 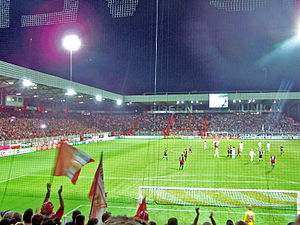 The Stadion An der Alten Försterei is the largest single-purpose football stadium in Berlin.

When Union won promotion to the DDR-Oberliga (the top flight in East Germany) in 1966, the stadium soon needed to be expanded. The ground was first expanded in 1970 when the Gegengerade terrace was raised, whilst further extensions to the terracing at both ends in the late 1970s and early 1980s increased the capacity furthermore to 22,500. However, the somewhat spartan facilities at Alte Försterei had quickly begun to show their age though, as the club was not able to properly maintain the expansive ground as attendances - in common with the majority of clubs in the East and West - went into a serious decline. Later, after German reunification, when Union were assigned by the German Football Association to play in the 3rd league, the outdated stadium proved only one of a number of factors that hampered the club's push for promotion to higher leagues.

In the middle of 2008, the club decided to finally modernise the stadium, the Stadion An der Alten Försterei (Old Forester's House). Money was still tight, and so the fans simply built the ground themselves. More than 2,000 Union supporters invested 140,000 working hours to create what is now regarded as the largest football-only stadium in Berlin. The official opening on 12 July 2013, was celebrated with a friendly against Scottish Champions Celtic F.C.. It holds 22,012 people with 3,617 seats. The rest is terracing.

In 2014, the club came up with the idea of inviting fans to take their own sofas to the ground for the whole of the World Cup. More than 800 sofas were placed on the pitch in rows in front of the big screen.[3] 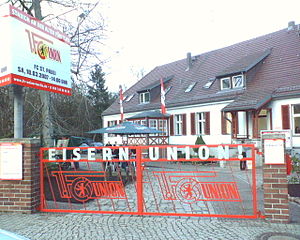 The Alte Försterei (Old foresters house) is the main office of the club. 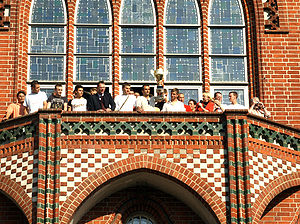 The team celebrates their Berlin Cup victory at the Köpenick town hall in 2007.

As of 29 October 2015[4]
Note: Flags indicate national team as defined under FIFA eligibility rules. Players may hold more than one non-FIFA nationality. 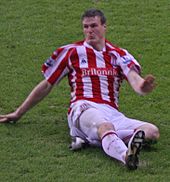 The club's reserve team, 1. FC Union Berlin II, most recently played in the tier four Regionalliga Nordost, having won promotion to the league in 2012. Previous to this it spent two seasons in the NOFV-Oberliga Nord. At the end of the 2014–15 season the club withdrew the team from competition.[5][6]

The club is widely recognized as one of Germany's "Kult" clubs, based on many unique fan and club initiatives over the last two decades.

In former GDR times Union was known for a rivalry with Dynamo Berlin who was affiliated with East Germany's Secret Service Stasi. Union was patronized by Eastern German Trade Union FDGB. The club played some identificatory role in the unofficial opposition against the authorities of the communist system.[7]

In May 2004, the supporters raised enough money to secure the club's license for fourth-division football through a campaign called 'Bleed for Union'. This catchphrase was not meant metaphorically. One element of the campaign was that fans donated blood to Berlin hospitals and then gave the money they received from the blood bank to their club.

After 2010 Union Berlin became increasingly attractive for new Berliners, even internationals, who were drawn to the atmosphere at the club.

The official Union Berlin song is "Eisern Union" by the famous German Punk-Star Nina Hagen. The composition was recorded in 1998. Four versions were issued on a CD single by G.I.B Music and Distribution GmbH.

Union Berlin is also well known for its Christmas traditions celebrated in their home stadium. In 2003 the yearly Union Weihnachtssingen started as an unofficial gathering to which just 89 fans showed up. In 2013, 27,500 people attended, including players and supporters of other teams from around Germany and Europe. Fans drink Glühwein (mulled wine), wave candles around, light flares and sing a combination of Christmas carols and football chants.