10,000 Maniacs is a United States-based alternative rock band, which formed in 1981 and continues to be active with various line-ups.[1] 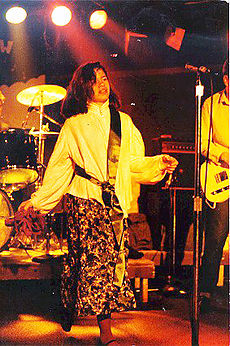 The period featuring vocalist Natalie Merchant was the most critically and commercially successful for 10,000 Maniacs. She is seen here performing with the band in 1984.

The band was formed as Still Life in 1981 in Jamestown, New York, by Dennis Drew (keyboards), Steven Gustafson (bass), Chet Cardinale (drums), Robert Buck (guitar), and Teri Newhouse (vocalist and Buck's ex-wife). Gustafson invited Natalie Merchant, who was 17 at the time, to do some vocals. John Lombardo, who was in a band called The Mills (along with brother guitarist/vocalists Mark Liuzzo and Paul Liuzzo and drummer Mike Young) and used to play occasionally with Still Life, was invited to join permanently on guitar and vocals. Newhouse and Cardinale left the band in July, and Merchant became the main singer. Various drummers came and left. The band changed its name to Burn Victims and then to 10,000 Maniacs after the low-budget horror movie Two Thousand Maniacs!.[2]

They performed as 10,000 Maniacs for the first time on Labor Day, September 7, 1981, with a line-up of Merchant, Lombardo, Buck, Drew, Gustafson, and Tim Edborg on drums. Edborg left and Bob "Bob O Matic" Wachter was on drums for most of the 1981 gigs. Tired of playing cover songs—though their first notable American hit was found in covering the Cat Stevens hit "Peace Train"—the band started to write their own music, usually with Merchant handling the lyrics and Lombardo the music. In March 1982, with Jim Foti on drums, the band recorded an EP album called Human Conflict Number Five. More gigs followed in 1982. During this time they lived in Atlanta, Georgia for a short while at the encouragement of friends who said that many gigs were available there. Discouraged by the actual lack of gigs, and by having to sell plasma and rake leaves to buy food, the band moved back to Jamestown in November 1982 to regroup.

At the beginning of 1983, Jerry Augustyniak joined the band as their permanent drummer. The Maniacs met Augustyniak when they played in Buffalo, New York, where he was in a punk band called The Stains. Between March and July, the band recorded songs for a second record, Secrets of the I Ching, their debut full-length album, which was pressed by Mark Records for the band's own label Christian Burial Music. The record was well received by critics and caught the attention of respected BBC Radio 1 DJ John Peel in London. One song, "My Mother the War", turned out to be a minor hit in the United Kingdom, and entered the independent singles chart. The band toured extensively during 1983 and 1984, and played gigs in the UK.

Peter Leak, an Englishman living in New York City, became interested in the band, made contact and was made their manager. With the help of Leak and Elektra Records A & R man Howard Thompson, 10,000 Maniacs signed to Elektra in November 1984. In the spring of 1985, they recorded their second full-length album, The Wishing Chair, in London at Livingston Studios, with Joe Boyd as producer. Though the album was not a blockbuster hit, its status as the band's major label debut did win it some notice, and it received significant critical acclaim.

Co-founder Lombardo left the band during a rehearsal on July 14, 1986. The remaining five members started recording a new album in Los Angeles, with Peter Asher as the producer. In My Tribe, a more pop-rock oriented record, was released on Tuesday, July 7, 1987, hit the charts where it stayed 77 weeks, peaking at No. 37 and established a large US audience for the group and was also well received in the UK. The album originally contained "Peace Train." It was removed from subsequent pressings after Cat Stevens (now Yusef Islam) made comments implying he agreed with a death Fatwa against author Salman Rushdie. The next album, 1989 Blind Man's Zoo hit No. 13 and went gold, further increasing the group's following. In May 1989, the British music magazine, NME reported that 10,000 Maniacs had won the songwriter category prize at the New York Music Awards.[3] In 1990, with the help of Lombardo, they remastered their first two records Human Conflict Number Five and Secrets of the I Ching and released them as a compilation called Hope Chest: The Fredonia Recordings 1982-1983. Lombardo and Mary Ramsey, who had formed a folk act called John & Mary, opened gigs for the Maniacs on the Hope Chest Tour in 1990. In 1991, during the recordings of a new album, Merchant revealed to the other members that she would be leaving for a solo career in two years' time. The new album, Our Time in Eden, was released on September 29, 1992.[4] In 1993 the band performed at the MTV Inaugural Ball for President Clinton in January, and on MTV Unplugged on April 21. Merchant announced her leaving the band on MTV on August 5, 1993, saying she "didn't want art by committee anymore."[5] The MTV Unplugged album was released on October 26, 1993.[6] "The last 10,000 Maniacs gig was the first time I'd got drunk in nearly two years," Merchant later recalled. "I laughed a lot and threw lots of flowers out of the hotel window."[7]

10,000 Maniacs released two albums with Ramsey on vocals. In 1997 they released Love Among the Ruins on Geffen Records and followed up in 1999 with The Earth Pressed Flat on Bar/None.

In December 1998, Buck took some time off from the band, moving to Texas to focus on a new project called League of Blind Women. The band recruited Buffalo-based Michael Lee Jackson of the band Animal Planet to step into the lead guitar role. Buck returned to the band in the summer of 1999.

On November 3, 2000, 10,000 Maniacs played with the Buffalo Philharmonic Orchestra, in Buffalo, N.Y. It was the last concert they performed with Buck. On December 19, 2000, Buck died of liver failure at the age of 42.[8] He was buried in Mission Cemetery in Sugar Grove, Pennsylvania.

The band took a break. Gustafson and Drew, with Jeff Erickson started a band called The Mighty Wallop!. Augustyniak joined a band called Only Humen. On December 5, 2001, a 10,000 Maniacs line-up comprising Gustafson, Drew, Augustyniak, Lombardo, and Ramsey played on a benefit concert in Toronto, with Buck's former guitar technician, Erickson, on lead guitar.

In 2002, Gustafson, Drew, and Augustyniak decided that they wished to continue with a new lead singer. Lombardo showed up at the first band practice, found out that the band had hired Erickson to play lead guitar and Oskar Saville of the Chicago-based band Rubygrass to sing, and quit the band. This lineup toured sporadically between 2002 and 2006, playing at various festivals. Ramsey rejoined the current edition of 10,000 Maniacs for several dates in 2006, playing viola and singing backing vocals.

On January 27, 2004, Elektra/Asylum/Rhino Records released Campfire Songs: The Popular, Obscure and Unknown Recordings, a two-CD set compilation, with 31 digitally remastered songs, four of them demos and one unreleased. The second disc contained B-sides and outtakes throughout the band's career up to that point, including many covers. Jackson Browne's "These Days" and Tom Waits's "I Hope That I Don't Fall in Love with You" were among those included.

The current edition of the band (Augustyniak, Drew, Erickson, Gustafson and Ramsey) remains active. On October 24, 2009, they performed at a benefit in Buffalo for the Griffis Sculpture Park in Ashford Hollow, New York. The band recorded an "Unkempt" acoustic show in Jamestown on January 16, 2010. Other recent shows include concerts in Chicago, IL; Keystone, CO; Rochester, NY and Clarence, NY. They also played a powerful performance at the popular Mohegan Sun Wolf Den in Uncasville, CT on August 4, 2010. Then later in 2010 played at the famous Oyster Festival in Norwalk, Connecticut. A short tour down the East coast included two sold out shows at City Winery in NYC, Ram's Head Tavern in Annapolis, MD and The Birchmere in Alexandria, VA.

John Lombardo has joined his former band mates on numerous occasions. Buffalo-based singer/songwriter Maria Sebastian has also accompanied the band in 2011 and has been replaced in 2012 by Jamestown-based singer/songwriter Melanie Luciano on acoustic guitar and harmonies. In June 2011 the band released the EP Triangles on their own label, Ruby Wristwatch Records. The band celebrated its 30th anniversary in October 2011 with two sold out concerts at the Scharmann Theater on the campus of Jamestown Community College. The band spent most of 2012 on recording a new full-length album at their studio in Jamestown, New York. In February 2013, they released the album, entitled Music from the Motion Picture, with Ramsey and Erickson sharing lead vocals.

It was announced on February 12, 2015[11] that the band has gone back into the studio to cut a new album, Twice Told Tales. The album was released on April 28, 2015 and celebrated by a performance at Buffalo Iron Works.[12] 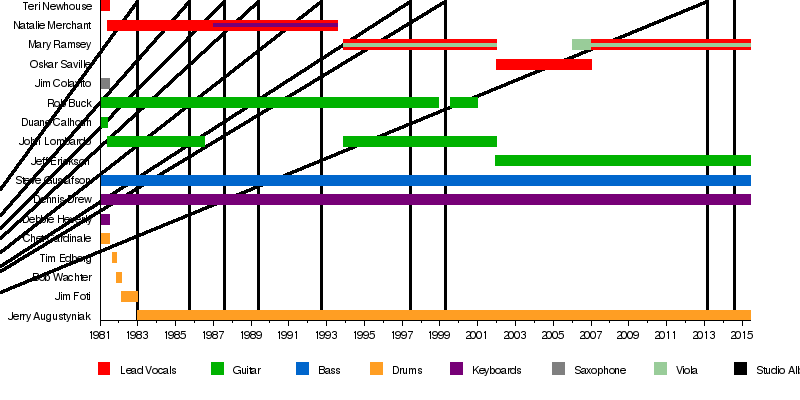