103rd Street is a local station on the IND Eighth Avenue Line of the New York City Subway. Located at West 103rd Street and Central Park West on the Upper West Side, it is served by the C train at all times except late nights, when the A train takes over service. The B train provides additional service here on weekdays. 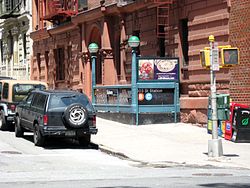 The only entrance, at 103rd Street 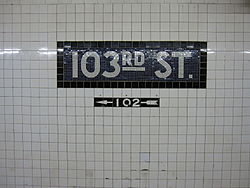 Tile color is blue with a black border

Both platforms have no trim line, but name tablets read "103RD ST." in white sans serif lettering on a blue background and black border. Small black "103" signs with white numbering run along the tiles at regular intervals and directional signs in the same style are below the name tablets. Blue columns run along both platforms at regular intervals with every other one having the standard black station name plate in white numbering.

This station has one fare control area at the center of the upper level platform. A single staircase connects the two platforms before a turnstile bank leads to a token booth and one staircase going up to the northwest corner of Central Park West and West 103rd Street. Directional signs indicate there were two more fare control areas, one at the extreme south end that led to West 102nd Street and the other at the extreme north end that led to West 104th Street.[4]

Within this station, the northbound express track descends to allow the northbound local to cross over it, before rising up at 110th Street, where the line becomes the standard four tracks side-by-side with the local tracks on the side and express tracks in the center. Also, the IRT Lenox Avenue Line passes underneath this station at the extreme north end and is not visible from the platforms.