Activated in 1921, the division was created as an infantry unit with a focus on nighttime combat operations. Deployed during World War II, the division saw almost 200 days of fighting in northwestern Europe as it fought through France, Belgium, and western Germany, fighting back several fierce German counterattacks as it advanced through the theater throughout late 1944 and 1945. This was the only combat duty that the 104th Infantry Division has served during its history. At the end of the fighting on 7 May 1945 (V-E Day), this division was in central Germany opposite the troops of its allies from the Soviet Army.

After World War II, this division was reorganized primarily as a training division for Reserve forces. After several decades, the division then expanded its role to conducting entry-level training for soldiers of all branches of the Army in the northwestern United States. Its role and size have expanded over that time due to consolidation of other training commands, and the division subsequently took charge of a number of brigades specializing in various entry-level training for soldiers of all types.

The 104th Infantry Division was first constituted on 24 June 1921 as the 104th Division, before being organized and activated in October of that year in Salt Lake City, Utah.[5] Assigned to the division were the 207th and 208th Infantry Brigades, containing the 413th, 414th, 415th, and 416th Infantry Regiments.[6] As a unit of the Organized Reserves, the division represented assets from the states of Montana, Wyoming, Idaho, Utah, and Nevada.[7] In 1924 it received its shoulder sleeve insignia.[2] The division would not see significant duty until World War II.[8]

At the outbreak of World War II, the 104th Infantry Division began preparing to participate in the war in Europe. The division was ordered into active military service on 15 September 1942 and reorganized as the 104th Infantry Division at Camp Adair, Oregon.[5] The 207th and 208th Brigades did not reactivate as part of an army-wide elimination of brigade commands within its divisions. The division was instead centered around three infantry regiments; the 413th Infantry Regiment,[9] the 414th Infantry Regiment,[9] and the 415th Infantry Regiment. Also assigned to the division were the 385th, 386th, 387th and 929th Field Artillery Battalions, as well as the 104th Signal Company, the 804th Ordnance Company, the 104th Quartermaster Company, the 104th Reconnaissance Troop, the 329th Engineer Battalion, the 329th Medical Battalion, and the 104th Counter Intelligence Detachment.[9] From that point it began training as a division in preparation for deployment to Europe. The division trained in the northwestern United States during the next two years, earning its name "Timberwolf Division" from its time in the area.[1] The division was the first army division to train specifically for fighting in nighttime conditions.[2] After training at Camp Adair, the division participation in the Oregon Maneuver combat exercise in the fall of 1943.[10][11]

The 104th Infantry Division sailed for Europe on 27 August 1944.[12] It landed in France on 7 September 1944.[1] In early October, Major General Terry de la Mesa Allen, Sr. took command of the division. He would command the division during most of its time in combat.[13] The division was assigned to III Corps of the Ninth United States Army, part of the Twelfth United States Army Group.[14] The division then organized and assembled at Manche, France before heading into combat.[15]

Joining the Battle of Hürtgen Forest, the division moved into defensive positions in the vicinity of Wuustwezel, Belgium on 23 October 1944. The Timberwolves were then assigned to British Field Marshal Bernard Montgomery's Anglo-Canadian 21st Army Group under the British I Corps, along with the U.S. 7th Armored Division, in order to clear out the Scheldt Estuary and open the port of Antwerp. While the U.S. 7th Armored Division was assigned static duty holding the right flank of the gains made during the failed Market Garden operation, the 104th Infantry Division was to assist the First Canadian Army in the taking of the Scheldt. The Timberwolves traveled across France by train and debarked near the Belgian-Dutch border and waited for word to attack, taking the place of the experienced British 49th Infantry Division on the left flank and the Polish 1st Armored Division on the right.

The Americans were given responsibility for taking 22 miles of wet, low country from the Belgian border to the Maas River. The width of their front was approximately 8,000 yards. General Allen planned to employ all three of his regiments at the same time, shoulder to shoulder. The 104th began combat operations on 25 and 26 October, and began to attack the Germans, who offered varying levels of resistance. Along the division's front, the Germans were spread thinly and did not have continuous lines of defense. However, they did possess deadly strong points, and endeavored to make the Timberwolves' progress as time consuming and costly as possible, making heavy use of mines, booby traps, and roadblocks. Despite this, advance was steady, though paid for in the lives of the 104th Division soldiers. Conditions were rainy, chilly, wet and muddy. Moisture seemed to grip everything and everyone. Sleet beat down on the troops, who went for days soaked to the skin and slimy with mud.[16] On 30 October, after five days of continuous operations the division had pushed about 15 miles to within sight of the Mark River and had liberated Zundert, gained control of the Breda-Roosendaal Road, and overrun the Vaart Canal defenses.[12] Leur and Etten fell as the division advanced to the Mark River, arriving there by 31 October.[12] A coordinated attack over the Mark River at Standdaarbuiten on 2 November established a bridgehead and the rest of the division crossed the river. With the Allies firmly on the north side of the Mark River, German resistance collapsed. For the next two days, the Timberwolves pursued enemy remnants north to the Maas River. Zevenbergen was captured and the Maas River was reached on 5 November.[12] That same day, General Allen received orders from the U.S. First Army, releasing it from British control. While the bulk of the division moved near Aachen, Germany, elements remained to secure Moerdijk until 7 November, when they were relieved.[12] During this time, the division was reassigned to VII Corps of the U.S. 1st Army, also part of the Twelfth Army Group.[14] By 7 November, the fighting in the Netherlands cost the Timberwolves 1,426 casualties, including 313 killed and 103 missing. Montgomery and the Canadian commanders sent their congratulations, and General Allen disseminated copies of their letters to his regiments and wrote a personal letter of thanks to everyone in the division, concluding with his favorite motto, "Nothing in Hell must stop the Timberwolves!" As a result of the actions of the 104th and their Allied counterparts, the Scheldt Estuary was cleared. The Royal Navy took three weeks to sweep the estuary waters clear of mines, and in early December 1944, the port of Antwerp was open to Allied shipping. 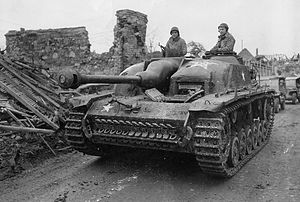 Soldiers of the 104th manning a Sturmgeschütz III with concrete armour, captured during the Battle of the Bulge. U.S. markings were added upon capture. The GI to the left is carrying a captured German StG 44

While under American command on 16 November 1944, the division went on another offensive, taking Stolberg and pushing on against heavy resistance.[17] Eschweiler fell on 21 November and the enemy was cleared from the area west of the Inde River, including Inden by 2 December 1944. Lucherberg was held against enemy counterattacks on 3 December, and all strongholds west of the Roer River were captured by the 23rd.[17] It took temporary command of the 60th Infantry Regiment of the 9th Infantry Division.[18] During the Battle of the Bulge, the 104th actively defended its sector near Duren and Merken from 15 December 1944 to 22 February 1945. During that time, it was reassigned to XIX Corps of the Ninth United States Army.[14] It then moved across the Roer taking Huchem-Stammeln, Birkesdorf, and North Duren.[17] On 5 March, after heavy fighting, it entered Köln. After defending the west bank of the Rhine River, the division crossed the river at Honnef on 22 March 1945, and attacked to the east of the Remagen bridgehead.[17] During this time, some of the division's assets fell under command of the 1st Infantry Division and the 3rd Armored Division.[19] After a period of mopping up and consolidation, it participated in the trap of enemy troops in the Ruhr pocket. The 104th repulsed heavy attacks near Medebach and captured Paderborn on 1 April 1945.[17] After regrouping, it advanced to the east and crossed the Weser River on 8 April, blocking enemy exits from the Harz Mountains. The division then crossed the Saale River and took Halle in a bitter five-day struggle from 15 to 19 April.[17] The sector to the Mulde River was cleared by 21 April, and after vigorous patrolling, contacted the Red Army at Pretzsch on 26 April.[17] The division took temporary command of assets from the 69th Infantry Division in early May.[18] 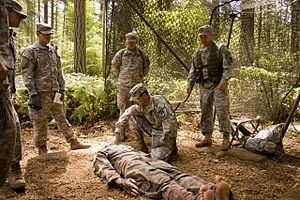 Members of the 104th providing instruction to ROTC cadets, in 2011

Two additional provisional brigades were created under the 104th Division in 1999; the 8th Brigade, 104th Division was created at Fort Lewis as a unit for training Reserve Officers' Training Corps cadets, and the 4690th US Army Reserve Forces School at Fort Shafter, Hawaii was redesignated as the 4690th Brigade, 104th Division, for service as a multifunctional training unit.[30] In 2005, the Base Realignment and Closure suggestions included the closure of the Vancouver Barracks, and the 104th Division was subsequently relocated to Fort Lewis, Washington.[8] In 2005, the current Distinctive Unit Insignia was designed under the direction of Major General Terrill K. (TK) Moffett. The 104th received its new distinctive unit insignia in 2006.[2]

In October 2007, the division was renamed the 104th Division (Leader Training). This change reflected a change in the division's mission, specifically training officer and non-commissioned officer candidates in their assigned fields.[2] 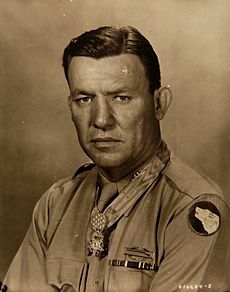 In addition, two soldiers from this division were awarded the Medal of Honor for their service in combat. They are Willy F. James, Jr., for scouting German positions while being pinned down by machine gun fire,[34] and Cecil H. Bolton, who led a company of men on the attack despite wounds from a mortar shell.[35]