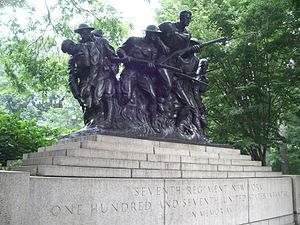 107th Infantry Memorial is an outdoor bronze sculpture and memorial by sculptor Karl Illava and architects Rogers and Haneman, located at the intersection of East 67th Street at Fifth Avenue in Central Park, in Manhattan, New York. It was donated by the Seventh Regiment New York 107th United States Infantry Memorial Committee.[1] 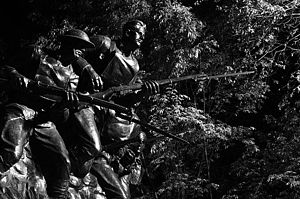 The memorial at night

Over 5,000 people [2] attended the dedication of the monument on September 29, 1927, on the 9th anniversary of the Battle of St. Quentin Canal, an attack on the Hindenburg Line.[3] Speakers included Colonel Hanford MacNider, the Assistant Secretary of War, New York State Senator William T. Byrne, and Major General John F. O'Ryan.[3] The presentation address was by Lieutenant Colonel Nicholas Engel of the 107th.[3] The sons of two fallen members of the 107th, Captain Clinton E. Fisk of Company D and Captain Fancher Nicoll of Company L., unveiled the monument.[3]

When it was unveiled, many people speculated that the lead soldier was modeled after boxer Gene Tunney, but "[o]fficers of the regiment denied this, saying the sculptor merely had striven to emphasize the characteristic expression of the typical soldier in action"[2] and the sculptor said the figure was based on advertising executive Paul Cornell.[4]