The 108th Wing (108th WG) is a unit of the New Jersey Air National Guard, one of the many units stationed at Joint Base McGuire-Dix-Lakehurst, New Jersey. If activated to federal service, the Wing is gained by the United States Air Force Air Mobility Command.

The World War II predecessor unit, 348th Fighter Group, was the most successful P-47 Thunderbolt group in the South West Pacific Theatre. Its commander, Colonel Neel Ernest Kearby was awarded the Medal of Honor for his actions in combat. Over a dozen of the group's pilots became Flying aces.

In addition to their primary air refueling mission, the Wing also supports an Intelligence Squadron and a Contingency Response Group

The 108th wing consists of the following units:[1]

The wing operates a total of 8 KC-135R Stratotankers and Detachment 2, 108th Air Refueling Wing flying a single C-135B transport version of the KC-135.

File:Oneill-348fg.jpg
First Lieutenant Lawrence F. O’Neill of the 342nd Fighter Squadron, in the cockpit of his Republic P-47D Thunderbolt, AAF Serial No. 42-22903, which he christened “Kathy/Veni Vidi Vici,” following his quadruple victory on 26 December 1943. O'Neill survived the war and reached Ace status with a total of 5 aerial victories.

After an extended period of training in the northeast United States, the Group deployed to Archer Field (Archerfield Airport), Brisbane, Australia in June 1943. Began long-range missions to strike at Japanese targets in New Guinea. In mid-June the 348th made the 1,200-mile flight from Brisbane to Port Moresby, New Guinea. The unit operated from New Guinea and Noemfoor until November 1944, flying patrol and reconnaissance missions and escorted bombers to targets in New Guinea and New Britain.

In 1944 the 348th began to attack airfields, installations, and shipping in western New Guinea, Ceram, and Halmahera to aid in neutralizing those areas preparatory to the US invasion of the Philippines. When U.S. troops landed on Luzon the group in process of conversion from P-47's to P-51 Mustangs, began operation from San Marcelino airstrip a few days after the landing at San Marcelino and Subic Bay. From this location the unit engaged in ground support operations, bombing and strafing in close support of ground troops. Remained in the Philippines throughout the campaign, moving to Okinawa in mid July 1945 in preparation for the planned invasion of Japan. Engaged in long-range operations over the Japanese Home Islands until ceasing combat on 14 August 1945.

Became part of the Army of Occupation in Japan, moving to Itami Airfield, Japan in October 1945 as part of Far East Air Forces. Inactivated at Itami Airfield on 10 May 1946.

The wartime 348th Fighter Group was re-designated as the 108th Fighter Group, and was allotted to the New Jersey Air National Guard, on 24 May 1946. It was organized and re-designated as the 108th Strategic Fighter Wing at Mercer Airport, Trenton, New Jersey and was extended federal recognition on 26 May 1949. It was allocated to the Strategic Air Command by the National Guard Bureau.

In the late 1940s, the new Strategic Air Command (SAC) was manned by personnel of the wartime Eighth and Fifteenth Air Forces. During World War II they usually encountered swarms of enemy fighters and knew the importance of having fighter escorts. In the postwar era, SAC had fighter wings placed under their own operational control. The Wing trained in escorting SAC's B-29 and later B-50 and B-36 strategic bombers. 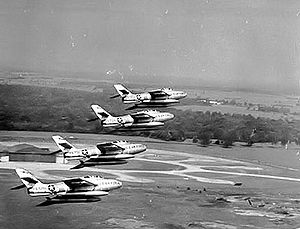 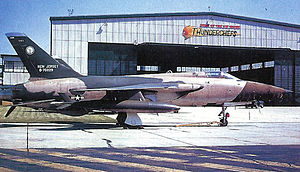 Republic F-105B AF Serial No. 57-5829. The sign on the hangar proudly proclaiming McGuire AFB as the "Home of the Air Guard Thunderchiefs".
File:NJANGandNorwayF-5.jpg
McDonnell F-4D-28-MC Phantom AF Serial No. 65-0696 of the 141st TFS with a Norwegian Air Force Northrup F-5E Freedom Fighter while deployed to NATO on 1 September 1982. After its retirement in 1985, this aircraft was briefly in private hands as civil registration N402AV, then preserved at the Heritage Aviation Airpark, Palmdale, California.
File:Usaf.kc135.750pix.jpg
KC-135 refueling an F-22A

The unit was called to active federal service on 1 March 1951 and assigned to Strategic Air Command 40th Air Division. In its activated configuration, the wing was composed of the 141st Fighter Squadron (New Jersey ANG), 149th Fighter Squadron (Virginia ANG) and the 153rd Fighter Squadron (Mississippi ANG). The Wing was sent to Turner AFB, Georgia where it continued its mission to provide fighter escorts to SAC bombers on training missions. In December 1951 it was moved to Godman AFB, Kentucky where it replaced a unit deployed to England. It was released from active duty and returned to New Jersey state control on 10 November 1952.

With return to state control, the Wing was transferred to Air Defense Command (ADC) and was re-designated as a Fighter-Interceptor Wing. In addition to the now redesignated 141st Fighter-Interceptor Squadron, the wing added the 119th Fighter-Interceptor Squadron at Atlantic City. Both Squadrons were re-equipped with ith the long-range North American P-51H Mustang fighter and Designed for the invasion of Japan, the P-51H was the last variant of the P-51 Mustang of World War II, but was produced too late to see any wartime combat. Not used in the Korean War due to it not being believed as "rugged" as its famous "D" model predecessor, the P-51H was used instead to equip Air National Guard units into the 1950s as an ADC interceptor. In 1955, the Mustangs were retired and the squadron entered the jet age, with the arrival of the North American F-86E Sabre.

On 1 October 1961, as a result of the Berlin crisis, the 108th TFW was again ordered to active federal duty. When activated, the 108th consisted of three squadrons, the 119th TFS at Atlantic City Airport, the 141st TFS McGuire Air Force Base, New Jersey, and the 149th TFS from the Virginia ANG at Byrd Field, near Richmond, Virginia. All three squadrons were flying the F-84F Thunderstreak.

Once activated, the wing was deployed to Chaumont-Semoutiers Air Base, France. However, only a portion of the 108th TFW deployed to France due to DOD budget limitations. This consisted of 28 F-84F's of the 141st TFS and officers and airmen from all three squadrons, with the remaining aircraft and personnel remaining on active duty at their home stations. The first elements of the 108th deployed to Chaumont from McGuire AFB on 16 October with the last aircraft and personnel arriving on 6 November. The ground units deployed by sealift, with the deployed elements reaching Chaumont by 17 November.

In France, the deployed elements of the 108th TFW were designated the 7108th Tactical Wing on 20 November due to the reduced strength of the wing in Europe. The primary mission of the 7108th was to provide close air support to the Seventh Army in Europe under the direction of Ground Forward Air Controllers. To accomplish this mission, up to 30 sorties were flown each day. Pilots and aircraft were rotated back and forth from Atlantic City and Richmond in order for all pilots in the wing to become familiar with flying conditions at Chaumont and to teach USAFE operational procedures.

The deployment to France ended in October 1962 and the wing returned to New Jersey state control. The 119th TFS expanded to group size with the activation of the 177th Tactical Fighter Group. Immediately following this action, their F-84Fs were replaced by North American F-86H Sabres. The 141st TFS, having left their F-84F's in France, were re-equipped with F-86H's upon their return.

In 1989, the 108th was declared the best Air National Guard flying unit and awarded the coveted Spatz Trophy. It participated in numerous exercises and made six overseas deployments as a fighter unit, to France, Greece, Ecuador and three times to Norway.

With the end of the Cold War, the 108th Tactical Fighter Wing was re-aligned to a KC-135 Stratotanker Air Refueling Wing. The F-4s were retired and the squadron was re-designed as the 141st Air Refueling Squadron. Also, as part of the conversion of the wing to the Objective Wing organization, the 108th Tactical Fighter Group became the 108th Operations Group, to which the 141st was assigned. The 108th received its first KC-135E Stratotanker on 27 September. Yet, a scant 69 days later, on 6 December, it flew its first refueling mission. Forty one days later, on 16 January 1992, it flew its first operational mission – a night, air refueling of an E-3B "Sentry" bound for the Persian Gulf.

1992 was a busy year for the 108th. They flew their first passenger airlift mission on 27 February; its first overseas mission (Costa Rica) on 13 March; its first European mission, Germany 28 May, (South Korea) on 20 July, and its first humanitarian mission on 1 September, (three Stratotankers filled with critically needed supplies to "Hurricane Andrew" (Florida) victims). The Wing was certified combat ready on 3 December 1992. The very next day it was tasked with two missions – its first operational deployment – nothing less than spearheading and establishing the U.S. – Somalia air bridge for OPERATION RESTORE HOPE. It not only deployed an air refueling detachment to Moron Air Base, Spain, but also airlifted active duty air crews to Cairo West Air Base, Egypt. In January 1993, while deployed at Moron AB, Spain, the Wing off loaded its one millionth pound of fuel.

In September 1994, for over 30 days, five aircraft and 300 members deployed to Pisa, Italy for DENY FLIGHT. The 108th replaced the 126 ARW of the Illinois Air National Guard. Supported by 15 active duty Air Force personnel, the 108th ARW was the first Air National Guard unit to take full responsibility during that period.

May through August 1995, 13 members of the 108th and 170th Clinic deployed to Guantanamo Bay Naval Base, Cuba for a humanitarian mission, Operation Sea Signal.