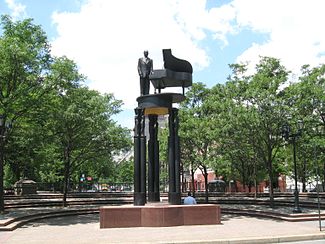 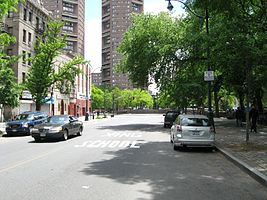 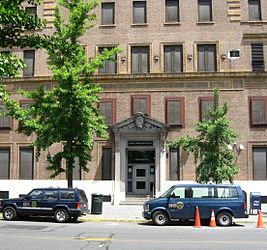 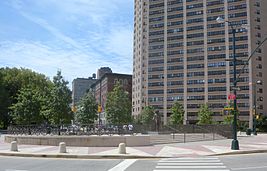 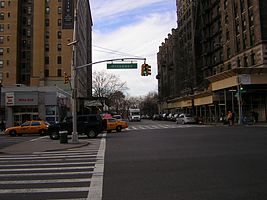 110th Street is a street in the New York City borough of Manhattan. It is commonly known as the boundary between Harlem and Central Park, along which it is known as Central Park North. In the west, between Central Park West / Frederick Douglass Boulevard and Riverside Drive, it is co-signed as Cathedral Parkway.

A statue of Duke Ellington stands in Duke Ellington Circle, a shallow amphitheater at 110th Street and Fifth Avenue, at the northeast corner of Central Park. Unveiled in 1997, the statue, by sculptor Robert Graham, is 25 feet (7.6 m) tall, and depicts the Muses — nine nude caryatids — supporting a grand piano and Duke Ellington on their heads.[1] Duke Ellington Circle is also the site of the future Museum for African Art.

The south edge of the close of the Cathedral of Saint John the Divine is located along West 110th Street, known along this stretch as Cathedral Parkway, between Morningside Drive and Amsterdam Avenue. The street comes to a close at Riverside Drive before Riverside Park.

Central Park North is a section of West 110th Street. As the name implies, it lies at the northern end of Central Park. It is bounded by Central Park West on the west and Fifth Avenue on the east. It is notable for its incongruities; the Lincoln Correctional Facility – originally constructed in 1914 for the Young Women's Hebrew Association – stands just a few blocks away from new luxury condo developments.

The original Polo Grounds was located along Central Park North, between Fifth and Sixth avenues. Originally hosting polo, it was the home for the New York Metropolitans baseball club from 1880 to 1886 and for the New York Gothams – subsequently the Giants – from 1883 to 1888.

In the first decade of the 21st century, there was significant real estate development on properties with a view of Central Park. In 2003, Manhattan-based developer Athena headed by Louis Dubin bought a property on this street.[3][4][5] The building was pitched as "an opportunity for New Yorkers to be on the park at roughly half the price of Central Park South."[6] The rebirth of Harlem along Central Park north had attracted celebrities such as Marcia Gay Harden, Maya Angelou, and Kareem Abdul-Jabbar.[7] The finished building was 20 stories tall with 48 residential units, 9,500 of ground floor retail space, 48 parking spaces, and each unit had a view of Central Park.[8]

The elevated IRT Ninth Avenue Line used to reach a great height at its 110th Street station and, according to Douglas (2004), was a popular site for suicide jumpers. In 1927, The New York Times reported that:

"the number of suicides from the 110th Street Station of the Sixth Avenue elevated is ruining the business of the merchants with shops below, according to [the merchants].... According to [a spokesperson] there were eleven suicides from that station in the past year, and the effect has been such that potential customers prefer to walk a little farther rather than risk seeing a person hurtle from above."

George Gershwin lived in the apartment building on the northwest corner of 110th and Amsterdam Ave., where he composed his seminal piece, Rhapsody in Blue. Arthur Miller lived there as a child.

Like 96th Street, 110th is seen to symbolically divide New York City by wealth, class and race, particularly on the East Side. On the West Side, west of Morningside Park especially, 125th Street is a more salient marker due to Columbia University.