The 111th Attack Wing provides protection of life, property, and the preservation of peace and order when tasked to do so by state or federal authorities. The Wing also provides operational and support units, as well as qualified personnel, to support wartime tasking and contingency commitments of any nature.

The wing's 103d Fighter Squadron was inactivated in 2010 and the Air Force Reserve 913th Airlift Wing was inactivated in 2007 as a result of BRAC 2005. DoD closed Naval Air Station Joint Reserve Base Willow Grove, the home station of the 111 FW, in October 2011 and transferred custody of the installation to the Pennsylvania Air National Guard, which renamed it Horsham Air National Guard Station.

Currently, the 111th trains on its new missions. The wing hosts several new tenant organizations at the base including units of the Pennsylvania Army National Guard and the U.S. Army Reserve, among others.[1]

The 111th Fighter Wing consists of the following units:

The 111th Operations and 111th Maintenance groups were inactivated in 2010 when the wing became a non-flying unit. 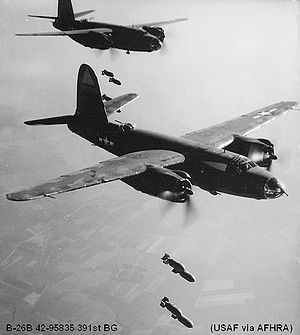 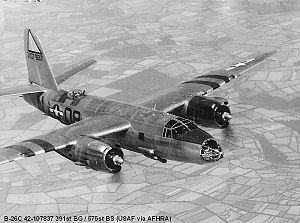 Constituted as 391st Bombardment Group (Medium) on 15 January 1943 and activated on 21 January Trained with B-26's for duty in Europe with Ninth Air Force. Assigned to RAF Matching, England on 26 January 1944. The group marking was a yellow triangle painted on the tail fin of their B-26s.

The first mission was flown on 15 February and 150 more were completed before the group moved into France in late September 1944. During the ensuing weeks the 391st bombed targets such as airfields, marshalling yards, bridges, and V-weapon sites in France and the Low Countries to help prepare for the invasion of Normandy. The group attacked enemy defenses along the invasion beaches on 6 and 7 June 1944. From June through September, the group continued cross-Channel operations, which included attacks on fuel dumps and troop concentrations in support of Allied forces during the breakthrough at Saint-Lô in July 1944, and strikes on transportation and communications to block the enemy's retreat to the east.

A total of 20 B-26s were missing in action during the 391st's operations from Matching before the group moved onto the continent, transferring to Roye/Amy, France (ALG A-73) on 19 September 1944. The group then switched to Douglas A-26 Invaders and flew its last mission on 3 May 1945 from Asche, Belgium (ALG Y-29).

The 391st Bomb Group returned to the United States in October and was inactivated at Camp Shanks, New York on 25 October 1945.

The 103d was federalized on 10 October 1950 along with its parent 111th Composite Wing due to the Korean War. Many of the pilots and maintenance personnel were split off and sent for duty overseas as individuals assigned to other combat units there. Eventually the B-26 bombers were sent as reinforcement aircraft to Far East Air Force for use in Korea.

On 13 June 1952, two 111th pilots were flying an RB-29 over the Soviet Union when they were shot down by a pair of Mikoyan-Gurevich MiG-15s. The RB-29 was never recovered, having crashed in the waters off of Vladivostok, Russia. The Pennsylvanian families of the Air Guard pilots were told they had simply "vanished" in a weather-reconnaissance flight near Japan. It wasn't until the fall of the Soviet Union and the opening of communist archives that the relatives found out the truth in 1993. It is unknown as to whether any of the pilots or crew of this aircraft were captured by the Soviets at that time.

When inactivated the ANG personnel were released to their parent units. The equipment and active duty personnel remained at Fairchild and were gained by the newly formed 99th Strategic Reconnaissance Wing. 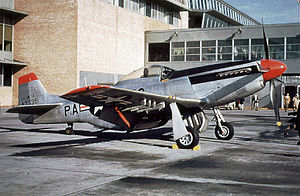 The 103d and the 111th were returned to control of the Pennsylvania Air National Guard in late November 1952, and the units were re-formed at Philadelphia International Airport by 1 January 1953. The 103d was re-equipped with the North American F-51D Mustang World War II fighter because of a lack of available jets at the time due to the Korean War. It was re-designated as the 103d Fighter Bomber Squadron and assumed an air defense mission. In 1955, Air Defense Command upgraded the group to the Republic F-84F Thunderstreak, and it received new aircraft. In July 1956, the 103d FIS switched to F-94A and B Starfigher interceptors; to F-94Cs in 1958 and the Northrop F-89H Scorpion in 1959.

In 1962, the unit transitioned from the F-89J jet interceptor to a large, heavy transport, the Boeing C-97 Stratofreighter, a double-decked, four-engine airplane. The new mission moved the wing into the Military Air Transport Service (MATS), and its successor Military Airlift Command (MAC) in 1966.

In 1963, the 111th ended its 39-year history at Philadelphia airport and moved to brand new facilities on the north end of the Willow Grove Naval Air Station. From Willow Grove, the C-97 was used to transport troops and cargo all over the world. The unit's flying personnel were used heavily during the Vietnam War and over two hundred members earned Vietnam Service Medals for their flights into that war zone. 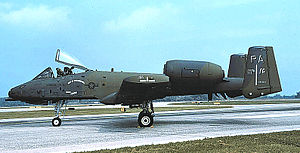 In 1969, the unit changed mission yet again, returning to its original roots as an observation unit. The new 111th Tactical Air Support Group initially flew the U-3A Blue Canoe, a Cessna 310, as an intermediate aircraft until it received the aircraft it needed for Airborne Forward Air Control (AFAC): the Cessna O-2A Skymaster. The O-2 was a two propeller aircraft used early in the Vietnam War for coordination between ground forces and fighter aircraft (the "O" stands for observation).

The Forward Air Control mission was sustained with the unit's switch to the OA-37 Dragonfly in 1981. The OA-37, was a heavier derivative of the T-37 trainer, and had been developed specifically for the Vietnam conflict. The unit made several deployments to Central America in the 1980s to fly with US allies there, who had been sold the A-37 as part of the US Foreign Military Sales program.

The A-37s were retired in 1988, and the 111th received the A-10A Thunderbolt II ground support aircraft. It was also used as a FAC aircraft (OA-10). Pilots continued their previous mission of providing AFAC and Combat Search and Rescue, although in a much more combat-worthy fighter. The A-10 allowed the wing to take part in the new deployments to Southwest Asia following Operation Desert Storm. The unit was re-designated as the 111th Fighter Group in 1992 and then as the 111th Fighter Wing in 1995.

Participating in Operation Southern Watch, the wing took advantage of this aircraft upgrade by volunteering for a 90-day deployment to Kuwait in 1995, to support joint combat flight operations for Operation Southern Watch over Iraq. Twelve aircraft were deployed to Al Jaber AB - a joint-use base by U.S. and Kuwait Air Forces. The base was fairly austere as it had suffered considerable war-damage from Desert Storm. Missions included Combat Search and Rescue alert, Kill Box flights over Iraq, Airborne Forward Air Control and joint training missions over Kuwait. About 40% of the wing participated in the deployment

Another interesting element was a small side deployment to Qatar. The 111th was the first Air Guard fighter unit deployed to Al Jaber and also the first ANG Wing to volunteer for a solo 3-month Operation Southern Watch deployment. The combat flight missions over Iraq were to enforce United Nations resolutions and occurred during the 1990s post Cold War era.

In 1996, the 111th FW pilots transitioned from the OA-10 AFAC mission to the universal A-10 "attack" mission. Now the pilots' primary task was to provide Close Air Support (CAS) for joint service ground forces, as well as performing AFAC and CSAR duties as before. This change to the normal A-10 role aligned the wing with all the other A-10 units in the active duty and Air Reserve Component (ARC).

The second 111th FW deployment to Al Jaber AB occurred in 1999, again to support joint combat flight operations for Operation Southern Watch over Iraq. Missions included Combat Search and Rescue alert, Kill Box flights over Iraq, Airborne Forward Air Control and joint training missions over Kuwait. Use of the A-10 was more limited than before, due to the aircraft's relative lack of a precision weapon capability [except the AGM-65 Maverick air-to-ground tactical missile].

Immediately following the 9/11 attacks on NYC and Washington, DC, the 111th FW voluntarily deployed on very short notice back to Al Jaber AB to support joint combat flight operations for Operation Southern Watch over Iraq and Operation Enduring Freedom over Afghanistan. Missions included Combat Search and Rescue alert and joint training missions over Kuwait. 111th Weapons personnel assisted in the loading of combat ordnance for the first sorties into Afghanistan in November, 2001.

From October 2002 - January 2003, the wing was the lead unit for a short notice, voluntary, out-of-cycle AEF deployment to Bagram AB, Afghanistan. Bagram had been a massive Soviet base during the decade when they occupied Afghanistan (1979–89), but was almost completely destroyed in that period and civil war afterwards. The 111th aircraft supported joint combat flight operations with US Army, Special Forces, and coalition ground forces in Afghanistan. The A-10s were flown and maintained in the most primitive conditions, yet the 111th personnel flew 100% of the assigned tasking for their entire deployment - at four times the normal sortie rate of home. Other unique aspects of the operation were total 'blacked out' night-time operations (no lights on the field or camp - everything was done by night vision goggles); an extensive number of mines/UXOs around and on the air field; extreme weather conditions and enemy shelling using BM-12 107mm rockets.

Upon returning to the U.S. in January 2003, the 111th FW again volunteered to participate in another SWA deployment to Al Jaber AB, Kuwait [fourth visit] from February 2003 - May 2003. The wing deployed for joint combat flight operations, in support of US Army, Marine and British ground forces as part of the initial phase of Operation Iraqi Freedom. Wing personnel were initially stationed at Al Jaber before transferring to Tallil AB, Iraq, midway through the initial campaign. Tallil was a former Iraqi air force base, which had not been used in a decade.

During this campaign, which included direct support for coalition armor forces during the entire invasion from the Kuwait border, through Basra and Baghdad, the wing pilots and maintainers successfully operated at a very high sortie rate. Tallil AB operations set another milestone due to its austere nature and forward location (which was essential to support the armor's thrust toward the capital).

The 111th Fighter Wing's achievement of voluntarily deploying to austere bases in two separate combat operations within a five-month period [2003] was part of the reason the unit was awarded the Air Force Outstanding Unit Award, with Valor, in 2005. It also was awarded the Reserve Family Readiness Award in 2003 and the ANG Distinguished Flying Unit Award in 2004.

This recommendation was part of a larger recommendation that would close NAS JRB Willow Grove, PA. DoD claimed that this recommendation would enable Air Force Future Total Force transformation by consolidating the A-10 fleet at installations of higher military value. Despite appeals from Ed Rendell, the Governor of Pennsylvania, the recommendations were upheld and the A-10s departed during 2010. The 103d Fighter Squadron inactivated on 31 March 2011.

On 19 March 2013, it was announced that the 111th Fighter Wing would be re-equipped with General Atomics MQ-9 Reaper unmanned aerial vehicles (UAV). The effective date of arrival for the MQ-9s is 1 October 2013.[2] 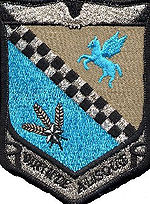 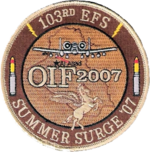 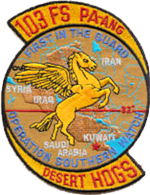