Situated on the Right Bank of the River Seine, the 11th is one of the most densely populated urban districts not just of Paris but of any European city.

The eleventh arrondissement is a varied and engaging area. To the west lies the Place de la République, which is linked to the Place de la Bastille, in the east, by the sweeping, tree-lined Boulevard Richard-Lenoir, with its large markets and children's parks. The Place de la Bastille and the rue du Faubourg St Antoine are full of fashionable cafés, restaurants, and nightlife, and they also contain a range of boutiques and galleries. The Oberkampf district to the north is another popular area for nightlife. The east is more residential, with more wholesale commerce, while the areas around the Boulevard Voltaire and the Avenue Parmentier are livelier crossroads for the local community. In recent years this district has emerged as one of the trendiest regions of Paris.

On November 13th 2015, it was the site of coordinated shootings and bombings that left 132 dead.

The peak population of Paris's 11th arrondissement occurred in 1911, with 242,295 inhabitants. Today, the arrondissement remains the most densely populated in Paris, accompanied by a large volume of business activity: 149,102 inhabitants and 71,962 jobs in the last census, in 1999.

The population consists of a large number of single adults, though its eastern portions are more family-oriented. There is a strong community spirit in most areas of the eleventh, and it is interspersed with pleasant squares and parks. 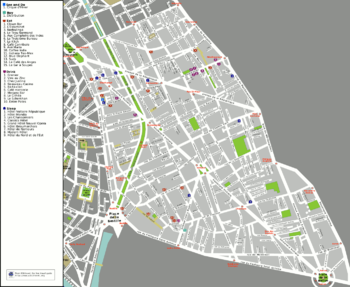 Map of the 11th arrondissement