The 132d Wing (132d W) is a United States Air Force unit assigned to the Iowa Air National Guard and located at Des Moines International Airport, Iowa. The 132nd's World War II predecessor unit, the 365th Fighter Group was a IX Fighter Command unit, serving in the European Theater of Operations. The 365th, known as the "Hell Hawks", was one of the most successful P-47 Thunderbolt fighter groups of the Ninth Air Force when it came to air combat. The 365th was awarded two Distinguished Unit Citations; Order of the Day, Belgium Army; Belgium Fourragère, and the Belgium Croix de Guerre. The 365th Fighter Group flew its last mission on 8 May 1945. After having operated manned fighter aircraft for all of its prior history, the wing was equipped with the MQ-9 Reaper unmanned aerial vehicle in 2013.

The units of the 132d Wing include: 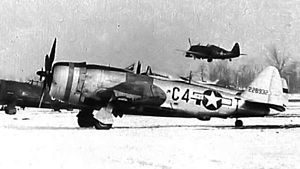 Constituted as 365th Fighter Group on 27 April 1943. Activated on 15 May 1943. Trained with P-47's. Moved to RAF Gosfield England in December 1943. Assigned to Ninth Air Force. It was several weeks before the 365th received a full complement of 75 P-47D Thunderbolts and mid-February 1944 before they were placed on operational status. Their first mission. flown on 22 February, was a bomber support sweep of short duration over enemy-held territory.

Early missions were flown in support of Eighth Air Force B-17 and B-24 bomber operations and on one of these on 2 March, the 365th had its first encounter with enemy fighters in the Bastogne area resulting in the loss of one Thunderbolt and claims of six of the enemy shot down. Oberstleutnant Egon Mayer. one of the most successful Luftwaffe aces flying in the West with 102 victories, fell in this battle.

On 5 March, with only nine missions to its credit the group moved south to RAF Beaulieu in Hampshire. The group was stood down three days after arrival so that it could undertake a two-week intensive course in ground attack and fighter-bombing. After training, the 365th flew dive-bombing missions to attack such targets as bridges, aerodromes, rail facilities, gun positions, and V-weapon sites prior to the invasion of the Continent.

On D-Day, its duties were attacking gun emplacements and communications facilities behind the bridgehead. Two P-47s were lost. On the following day when 12 separate squadron-sized missions were flown five aircraft failed to return.

An unusual accident occurred on 9 June when two P-47s being delivered to Beaulieu by ferry pilots landed on different runways at the same time and collided at the runway intersection with one pilot being killed.

The 365th was one of the most successful P-47 groups of the Ninth Air Force when it came to air combat, and a total of 29 enemy aircraft were credited as shot down during the four months the group operated from Beaulieu. On 25 June, the 365th had one of its best days when eight enemy fighter-bombers were destroyed. On 2 July, Lieutenant Colonel Robert L. Coffey, Jr., the Air Executive, became the Ninth Air Force's third Thunderbolt ace. As with other P-47 groups, losses were modest until ground attack became a regular task in June. All told, 24 P-47s were 'missing in action' during their stay at Beaulieu.

The 365th Group began its move to the Continent on 21 June, the first squadron taking up residence at Azeville, France (A-71) on 26 June, the last moving out of Beaulieu on 28 June and the rear party on 2 July providing tactical air support in support of U.S. First Army. On the continent, the group moved rapidly from one airfield to another, eventually winding up near Fritzlar, Germany (Y-86) on VE-Day.

After the end of hostilities, the 365th Fighter Group took part in the disarmament program until June, then returned to the United States in September 1945, being inactivated at Camp Myles Standish, near Taunton, Massachusetts on 22 September 1945. 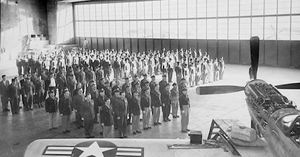 The War Department authorized the establishment of Air National Guard units in all 48 states, with three units comprising a wing based in Sioux Falls, Sioux City and Des Moines, Iowa. The Air National Guard wing[1] was organized by Colonel Frederick C. Gray, Jr.[2] who was a veteran of the RAF and 8th Air Force during World War II. Colonel Gray, based in Des Moines, Iowa, acted as wing senior instructor for the three Air National Guard units which comprised the wing. Col. Gray's appointment was made by Brigadier General Charles H. Grahl, Iowa Adjutant General, on 26 June 1946.

In 1946, Oscar Fladmark was appointed to the rank of captain and the duty of a flight commander with the Air National Guard 175th Fighter Squadron[3] based in Sioux Falls. Fladmark's appointment was approved by Colonel E.A. Beckwith, South Dakota Adjutant General in Rapid City, South Dakota on 20 September 1946.

Activated to Federal Service during the Korean War, sent to Dow AFB, Maine. Used by TAC to train replacement pilots in F-51D Mustang ground support operations, also deployed unit members to Japan and Korea to fly combat missions. The Wing was moved to Alexandria AFB, Louisiana in May 1952 again with F-51s replacing the federalized Oklahoma ANG 137th Fighter-Bomber Wing which was deployed to France. Performed training as a tactical fighter unit until relieved from active service and returned to Iowa ANG jurisdiction in January 1953.

During 1952, over one million dollars of federally funded improvements were added to the Des Moines airport. The work included the addition of 1,800 feet to the main runway and 3,480 feet of taxiways to better accommodate the Wing receiving jet aircraft upon their return to peacetime service. After returning to Des Moines, was re-equipped with F-80C Shooting Star jet fighter-bombers and returned to normal peacetime training committed to Tactical Air Command. Was later upgraded to newer F-84E Thunderjets in 1955. Was transferred to Air Defense Command in July 1958, becoming an all-weather F-86L Sabre Interceptor squadron, its new mission being the air defense of Des Moines and eastern Iowa.

In June 1960, the Lincoln, Nebraska-based 173rd FIS was reassigned to the new Nebraska ANG 155th Fighter-Interceptor Group when the squadron was expanded to a group-level organization. In a similar reassignment, the Sioux City-based 174th FIS was reassigned to the 185th Tactical Fighter Group on 30 September 1962. The F-86Ls of the remaining 124th FIS were replaced with F-89J Scorpion Interceptors, which the squadron flew until the summer of 1969.

The 132nd was transferred back to TAC in 1969, being re-equipped with second-line F-84F Thunderstreaks, the standard TAC aircraft for its Air National Guard-gained squadrons at the time. The 132nd upgraded to the F-100D Super Sabre, which were returning from South Vietnam in 1971, and being transferred to the ANG to replace the subsonic F-84s. The wing began receiving new and transferred A-7D Corsair II ground attack aircraft in 1976 when the National Guard Bureau began modernizing the ANG with frontline aircraft after the drawdown of the regular Air Force following the end of the Vietnam War.

With the retirement of the A-7Ds in the late 1980s, was upgraded to Block 42 F-16C Fighting Falcons in 1990. From 1998 to 2004 as part of the Air Expeditionary Force concept with an unprecedented six overseas contingency deployments to patrol the No-Fly Zone over Iraq in Operations Northern and Southern Watch. Two of the six contingency deployments occurred within a ten-month period attesting to the unit’s professionalism and high state of readiness.

Immediately following the events of 11 September 2001, the 124th Fighter Squadron's F-16s, pilots, and maintenance members were placed on alert, poised to defend Iowans and all Americans against any possible attacks. After 9/11 the unit’s F-16s were prepared to launch within minutes in the event of a "scramble" order – 24/7. The unit has also provided continuous Combat Air Patrols during Presidential visits.

The unit deployed to Al Udeid AB, Qatar in 2005 in support of Operation Enduring Freedom and Operation Iraqi Freedom. The squadron performed in an exceptional manner, exhibiting an impressive array of capabilities. Outstanding leadership and superb aircraft maintenance skills produced 456 sorties and 3145 flying hours in austere conditions. Total flying hours during this contingency equaled to over three-fourths of a year’s normal flying allocation in only 52 days.

The Wing was validated as the "Best of the Best" following its Operation Readiness Inspection, in 2004, by Air Combat Command (ACC). Seventy-three percent of 154 rated areas graded as Outstanding or Excellent. The "Excellent" received in each of the four major rated areas of Initial Response, Employment, Mission Support, and Ability to Survive and Operate, was a precedent that had not been accomplished by a fighter wing in recent inspections. The 132nd Fighter Wing’s rating was one of the highest achieved by an Active Duty, Air Reserve, or Air National Guard wing in the last several years. In addition, the Logistics Readiness Squadron received the 2005 Air Reserve Component Base Logistics Activity of the Year Award and the Maintenance Group received the 2005 Air National Guard’s Maintenance Effectiveness Award. As a result of its outstanding efforts and commitment to excellence, the Wing was awarded its seventh Air Force Outstanding Unit Award.

Less than a week after the destruction of Hurricane Katrina, 12 members of the 132nd Medical Group teamed up with 19 members of the Sioux City 185th Air Refueling Wing and headed south bringing aid to those injured or sick because of the storm. The team treated 80 to 100 patients a day with ailments ranging from minor cuts to dehydration and acute skin infections caused by exposure to bacteria laden sewer water.

The 132nd Fighter Wing received the Air Force Outstanding Unit Award in 2009. It was the eighth time the unit was the recipient of this prestigious award.

Congressional actions changed the wing to a unit operating Remotely Piloted Aircraft, MQ-9 Reapers, with the transition beginning in FY 2013.[4] The last regularly scheduled flights occurred in August 2013, after which the unit's 21 F-16s were transferred to the New Jersey Air Guard's 177th Fighter Wing, based in Atlantic City.[5]