The 150th Air Refueling Squadron (150 ARS) was a unit of the New Jersey Air National Guard 108th Air Refueling Wing. It was assigned to McGuire Air Force Base, New Jersey and was equipped with the KC-135 Stratotanker aircraft. The Squadron was inactivated in 2008 following the retirement of the wings KC-135E aircraft.

Established at Newark Airport, NJ, on February 1, 1956 Initially equipped with C-46 Commando aircraft, performed primarily tactical transport missions from Newark in the northeast. In 1964 retired the C-46s and was re-equipped with C-121 Constellation long distance transports, primarily for passenger movements to Europe, also flew to the Caribbean and to Japan, Thailand, South Vietnam, Australia and the Philippines during the Vietnam War.

The Constellations were retired in 1973, being replaced with the C-7 Caribou light transport, which were withdrawn from service in the Vietnam War. The C-7s were used for carrying small payloads in combat areas with rough airstrips.

In 1977 upon the receipt of Boeing KC-135 Stratotankers the unit became the 150th Air Refueling Squadron. It was the first air refueling unit in the Nation to launch tankers to establish the now famous U.S. Saudi Arabia "Air Bridge" during OPERATION DESERT Shield-DESERT STORM. Hours after President Bush ordered U.S. forces to the Persian Gulf, 150th aircrews were refueling fighters and cargo transports winging their way nonstop from the U.S. to the Persian Gulf. Shortly thereafter, and again, prior to certain units personnel being activated, the 150th deployed aircraft, aircrews, maintenance and support personnel to Saudi Arabia. It also provided urgently needed medical, security police and support personnel to U.S. air bases to assist active duty personnel and serve as "back-fill" for those already rushed to the combat theater.

In September 1994, for over 30 days, five aircraft and 300 members deployed to Pisa, Italy for DENY FLIGHT. Supported by 15 active duty Air Force personnel, the squadron was the first Air Guard Unit to take full responsibility during that period. 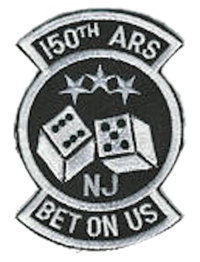