The 152nd Airlift Wing (152 AW) is a unit of the Nevada Air National Guard, stationed at Reno Air National Guard Base, Nevada. If activated to federal service, the Wing is gained by the United States Air Force Air Mobility Command.

The Nevada Air National Guard's 152nd Airlift Wing has a primary wartime mission of providing rapid airlift and airdrop of cargo and troops. They can also fly reconnaissance missions in support of military command and control operations, counter drug operations, disaster relief and photo mapping for federal and state agencies. The unit is tasked to deploy anywhere on the globe within an assigned response time to perform both day and night missions.

In addition to the wartime mission, the 152nd Airlift Wing also has a peacetime mission to train combat ready aircrew and assigned personnel. The unit has a State mission and has been called on numerous occasions to support local state emergencies such as fires, floods, riots and search and rescue operations.

On 19 April 1958, the Nevada Air National Guard 192d Fighter-Interceptor Squadron was authorized to expand to a group level, and the 152nd Fighter-Interceptor Group was established by the National Guard Bureau. The 192nd FIS becoming the group's flying squadron. Other squadrons assigned into the group were the 192nd Headquarters, 192nd Material Squadron (Maintenance), 192nd Combat Support Squadron, and the 192nd USAF Dispensary. The 152nd FIS was assigned to Air Defense Command. Also in 1958, the 192nd's day-only F-86A Sabres were sent to other units and the 192nd received the day/night/all-weather F-86L Sabre Interceptor aircraft. 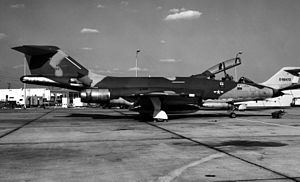 In 1961 Air Defense Command was reorganizing and the 192nd was transferred to Tactical Air Command. TAC re-designated the 152nd as a Tactical Reconnaissance Group, and equipped the 192d TRS with RB-57B Canberra reconnaissance aircraft. Tactical Reconnaissance would be the mission of the unit for the next 30 years. The RB-57s were the reconnaissance version of the B-57 Canberra light bomber, which has replaced the World War II B-25 Mitchell during the Korean War. The RB-57s were used by the active-duty Air Force beginning in the mid-1950s and it began to be sent to Air National Guard units in the late 1950s when the McDonnell RF-101A Voodoo entered service.

The 192nd used the RB-57s primarily to carry out photographic surveys of areas hit by natural disasters such as hurricanes or tornadoes. It was placed on alert during the 1961 Berlin Crisis and 1962 Cuban Missile Crisis, however it was not activated or deployed overseas.

In 1965 the RF-4C Phantom II began to enter active USAF service, and the 192nd received supersonic McDonnell RF-101H Voodoos to replace the subsonic RB-57s. The unit served during the 1968 Pueblo Crisis. On 26 January 1968 the Nevada Air National Guard was called to active duty as part of a national effort to meet the threat posed by North Korean seizure of the U.S. Navy ship the "USS Pueblo." During the next 16 months, Nevada Air Guardsmen served in Korea, Japan, Vietnam, Thailand, the Philippines, North Africa and some 18 bases within the United States. During this tour, the 192nd Reconnaissance Squadron was awarded the 5th Air Force Outstanding Unit Award, only the second unit selected for this honor. All Nevada Air National Guard units were released from active duty on 9 June 1969. In 1971, the RF-101Hs were replaced by RF-101B Voodoos that were re-manufactured after serving in the Canadian Air Force. However, unlike the F-101Hs, the "B" model was extremely expensive to operate in the field, requiring several costly and time-consuming fixes in order to maintain an acceptable operating standard. The career of the RF-101B with the Nevada ANG was relatively brief, giving way to the RF-4C Phantom II in 1975. The 192nd operated the RF-4C Phantom for nearly 20 years. The RF-4C was still in service at the time of the 1990 Gulf Crisis, In response to the Iraqi invasion of Kuwait, the 106th TRS of the 117th TRW of the Alabama ANG was deployed to Sheik Isa Air Base in Bahrain. This unit was reinforced in December 1990 by the 192nd TRS which deployed to Doha International Airport, Qatar. With combat operations beginning in January as part of Operation Desert Storm, the 192nd flew combat missions in the RF-4C. When the first strikes against Iraq took place on 17 January 1991, the RF-4Cs were in action from the start. At first, they were limited to daylight operations, flying over Kuwait almost every day in search of Republican Guard units. They flew over Baghdad looking for such targets as rocket fuel plants, chemical weapons plants, and command and communications centers. Later, the RF-4Cs were repeated diverted from other photographic missions to go and look for Scud launchers hiding in western Iraq. No RF-4Cs were lost in action and eventually flew over 1,000 combat hours and 350 combat flying missions. The unarmed Nevada aircraft took over 19,000 photographic prints using 300,000 feet of film without a single target lost from processing.

Following the end of Desert Storm, the RF-4Cs began their retirement from USAF and Air National Guard service. The 192nd RS finally turned in its last four RF-4Cs on 27 September 1995, their planes being flown to Davis-Monthan AFB for storage. These aircraft were the last RF-4Cs in operational service, and with their retirement the era of RF-4C service with United States armed forces to an end.

The Nevada Air National Guard began the conversion to a new aircraft and mission in October 1995, with training and construction to support the Airlift mission and the Pacer Coin Reconnaissance mission. The unit received its first C-130E Hercules aircraft on 9 April 1996, and became an operational Airlift Wing in April 1997.

Pacer Coin was a day/night, all-weather reconnaissance and surveillance system which provided imagery intelligence support to theater and other commanders in support of drug interdiction operations for U.S. Southern Command. The unit assumed this mission when it converted to the C-130E Hercules in October 1995. The Nevada Air Guard had the only Pacer Coin aircraft in the inventory. The special sensors and optics on-board provided photo reconnaissance capability.

The 152nd AW also took part in "Operation Joint Guard" (August 1997-December 1997) in support of peacekeeping operations in Bosnia. The unit deployed one aircraft and 130 personnel to provide reconnaissance support to the region with its Pacer Coin capability. Operating from Aviano Air Base, Italy, the unit was scheduled to remain in-theater for approximately 60 days, but was not returned home until after 104 days. Their deployments complete, the Pacer Coin aircraft was retired on 15 May 1998. 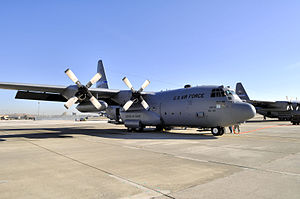 In May 1998, the United States military group (USMILGP) Commander Ecuador, requested the Nevada Air National Guard to send experienced individuals that could interface with the Ecuadorian Air Force, Army, and civilian mapping agency personnel. The purpose was to train them in the planning and execution of photo reconnaissance to assist them in their efforts to overcome the drug trafficking problems in their country. A week prior to the actual exercise to test the new methods and information, personnel from the 152nd AW deployed to Mariscal Sucre International Airport, Quito to conduct training and classes aimed at improving the skills of Aircrew and Photo Interpreters. Classes were conducted for a week with classroom training as well as practical exercises.

Scathe View had been an essential component of search and rescue, aerial mapping and Humanitarian Relief Operations (HUMRO) during post-Hurricane Katrina operations in 2005.

As of 2007, the 152nd Intelligence Squadron had 8 C-130H aircraft fitted with the system. At that time it was also planned to upgrade the MX-15 sensor and to provide a Beyond Line of Sight capability, allowing passing of data to intermediate higher headquarters and world-wide users.