From Infogalactic: the planetary knowledge core
Jump to: navigation, search
This article is about the year 1607. For the number, see 1607 (number). 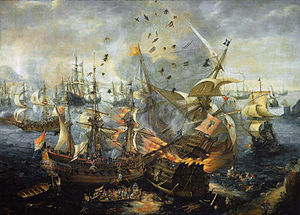 April 25: The Explosion of the Spanish Flagship during the Battle of Gibraltar, by Hendrick Cornelisz Vroom (1566–1640).