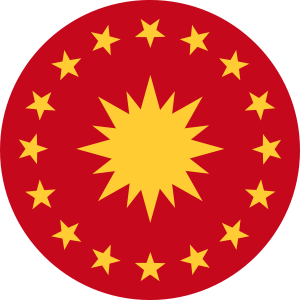 The so-called 16 Great Turkic Empires (Turkish: 16 Büyük Türk Devleti, also translated as "16 Great Turkish Empires") are a concept in Turkish ethnic nationalism, introduced in 1969 by Akib Özbek.[1] Prior to this assertion, the 16 stars had been taken as representing sixteen medieval beyliks which succeeded the Seljuk Empire.[2]

The Turkish Postal administration issued[year needed] a series of stamps dedicated to the 16 Empires, showing portraits of their respective founders as well as attributed flags.[3]

In January 2015, Turkish president Recep Tayyip Erdoğan received Palestinian president Mahmoud Abbas in the Turkish Presidential Palace with a guard of 16 "warriors", actors wearing loosely historical armour and costume, intended to symbolise the 16 empires.[4] However, the costumes have been widely criticized in media and one of the warriors costume (second from upper left) being seen as a "bathrobe" become a social trend as "Duşakabinoğulları" (a wordplay with Shower cabin).[5][6][7] 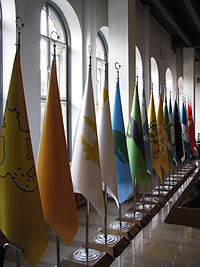 The "16 Great Turkic Empires" are the following:

Further linguistic and social/historical evidence is needed in order to properly list some of these states as Turkic states. Turkish nationalist writer, novelist, poet and philosopher, Hüseyin Nihâl Atsız, supporter of the pan-Turkist or Turanism ideology, had noted that while some states with questionable Turkic identity were included in the list, some ostensibly Turkic states (such as Akkoyunlu) were left out, and labeled the list a "fabrication."[10]In spite of Atsız' criticism, the concept has since become a mainstream topos in Turkish national symbolism. In 1985, under Turkish president Turgut Özal, it was invoked as a retrospective explanation of the 16 stars in the presidential seal of Turkey.[11]